After my recent research into what mechanical changes Nissan had made to the R34 vs the R33, and finding that basically, other than aerodynamic improvements, a lot of effort was put into improving body rigidity, I began to think about what I could do to improve the rigidity of my car.

Granted, it’s a Series 3 so there already is additional factory bracing in the rear trunk area, and I have already installed the Nismo underfloor bracing (both front and midsection), but what else is there?

Obviously, a roll cage is one solution, but I want the solution to be invisible. I have heard of foam that you pour in that hardens when it dries, but I have also heard that it can trap moisture, leading to rust, and that if not done properly it can, upon expansion, distort the sheet metal around it! Also, some people point out that it could cause the body to act in weird ways during a crash.

Spot welding is another option, but that of course should be undertaken with a full repaint, if you want to do it properly (although I will be looking into this).  So, my choices at the moment are limited to bolt on braces.

I searched on Minkara, the popular Japanese car-related website, in their “Parts Review” section (where readers post their reviews of parts), and found one part that received universal praise, and almost always the full 5 stars (out of 5 stars).  The Gacchiri Support from Nagisa Auto. Nagisa Auto is an Osaka based tuner that specializes in various small parts, but mostly suspension and body rigidity items.

“Gacchiri” in Japanese means “solid.”  The Gacchiri Support is a triangular shaped (patented!) fender brace that gets fitted on the door hinges area extending forward to the top part of the inner fender.  When the package arrived, I took out one side for a photo: 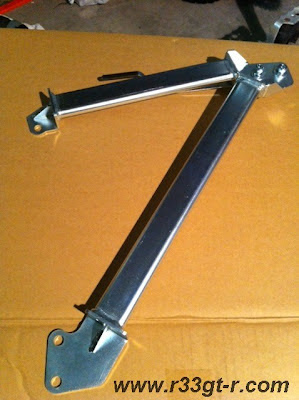 Here is the Nagisa Auto link for this brace
http://www.nagisa-auto.com/products/gacchiri/index.html

And for Nissan cars: http://www.nagisa-auto.com/products/gacchiri/nissan.html

Also there are some better photos of how it looks installed (apologies for no photos here as my tuner installed it and I was not around...)

Anyway, I’ve only driven the car a short distance, that is back from my tuner. And yet, in the few kilometers back home, I DID feel a difference. It’s somewhat hard to describe, but basically, the car feels more responsive to steering input, and strangely, it feels smaller.

This weekend I may be attending an event on a track, in which case I will be able to get a better feel for this, so will update in my next post!

I have a Nagisa Auto Gacchiri Support installed on my GT-R (BNR32) too, and I immediately felt the difference. Closing the door felt more solid, steering and the front end all seemed to become more at one.

Kansai Service makes a brace set too (I installed the middle and rear pieces), but I'm not sure if the BCNR33 set is still in production.

Do-Luck has a floor support bar that runs lengthwise beside the side sill, but one blogger reported the installation (on a BNR34) was a hassle and improvements were not as much as expected. Do-Luck also has a rear cross bar which I am still considering. I've heard good reviews, but it gets in the way of rear passengers' leg room.

Looks Great & Sure Will make a Difference. Looks like unless you are in Japan it will be hard to purchase from them..

Thanks for the comments! Good to know that I wasn't dreaming the difference, as some would say the placebo effect was at work.

I'm interested in the Do-Luck bar as well, and while the BNR34 owner said the improvements were not as much as he expected - remember that the 34 is a newer car, one designed to be more rigid from the beginning. So if there was even SOME effect on the 34, then on the 33 and even more on the 32, I would suspect there would be a difference.

@Duane - I think there are several companies that will import parts for you, including but not limited to Newera as Miguel mentions.

Here's the review of the Do-Luck Floor Support Bar for BNR34 I was referring to: http://flatout.main.jp/driving/parts/floor_support_bar/

Thanks very much for the link.

The guy spent a lot of time explaining how to install it on his ER34 coupe. He was disappointed that he didn't feel the effects immediately in the first 50 meters, but he did say it made a difference at 50km, when making turns - that is, the car responded quicker. He did not "feel" the car become more rigid, just the improved steering response.

My take on this is - the average driver is going to be hard pressed to feel a difference in the rigidity of the car itself. However the improved rigidity will manifest itself by tightening up the chassis - this means quicker steering, harsher ride, etc.

So consistent with what I felt with the Gacchiri Support, I think!