Well as I suspect most of us did not purchase our cars new from the dealer in Japan (maybe some of you were lucky to buy new in the UK?), we had little say in how our cars were optioned, either from the factory or at the dealership.  Recently, I’ve had a couple of people (R33 friends, of course) ask me about certain optional parts on the R33…which inspired me to dig into some old catalogs I happen to have, to find the OEM Options Catalog for the Series 1 R33 GT-R (stay tuned for reviews on the Series 2 and Series 3 option catalogs). 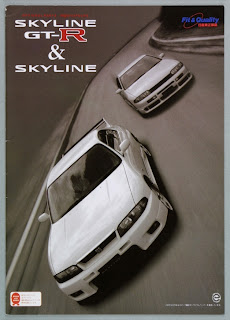 To be accurate, this catalog is for all of the 1995 R33 cars, GT-R, 2 door coupe, and 4 door sedan, and list various parts and other bits that the dealer would have installed (or convinced you to buy – hey dealers are dealers, anywhere in the world – anything to make money).  So even though the catalog is a good 26 pages long, only a few pages exclusively contain options only for the GT-R, which means that, in order to really figure out what parts COULD end up on our cars, I had to review the entire catalog and include, for discussion, any other parts that did not say “excludes GT-R.” (which, by the way, covers the majority of the parts – every time you see “GT-R除く“)

I’ve gone ahead and scanned in the entire catalog, HERE.  Maybe there is something interesting in there for you. I was not interested in the couple of pages with roof racks and 1990s tech stereos, for example…

Also, just to note this catalog is what the dealers offered as NISSAN parts. There was a separate catalog for NISMO parts. Of course I will hunt these down for a future post.

Anyway, in order to keep it simple, this post will highlight options for the EXTERIOR only and for the 1995 GT-R.  My next post will be for interior options.

Exterior Options Exclusive to the GT-R:
Page 1-2 – “Carbon” – Two carbon options were offered – an intercooler air guide, and an all carbon, rear spoiler blade.  The intercooler air guide I think works only with standard sized intercoolers (at least that is the description) so if you run a larger, thicker intercooler some clever rigging might be needed. 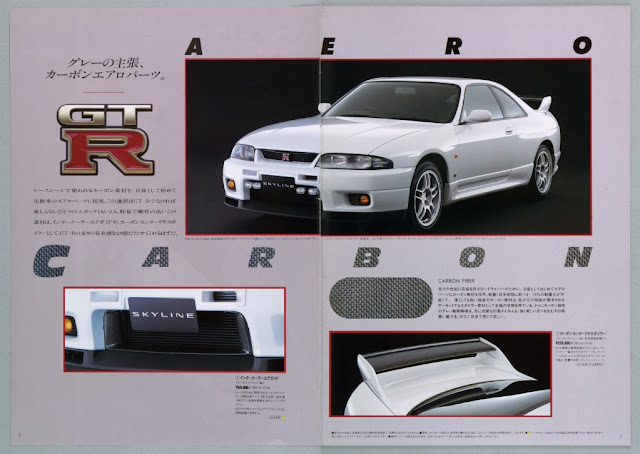 Note that the spoiler blade has a built in “lip” that the stock blade does not. This is a Gurney flap. Google it, there are lots of explanations out there why this is better than a standard flat spoiler. 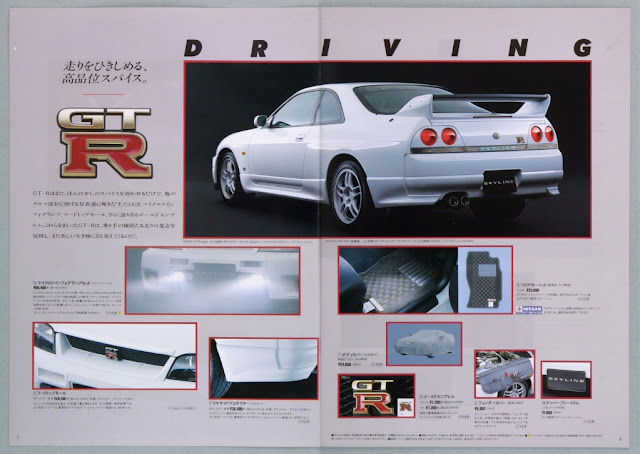 Page 3-4 – “Driving” – well these are your more typical options.  I think almost every GT-R I’ve seen has the floor mats, so it’s surprising these were an extra pay option.

You can tell the technology and fashion of the time by the types of options. Who in their right mind (now) would want a set of foglights that required 4 separate housings?  And the gold plated GT-R emblem… well, let’s just say I don’t see many of those.

But those “Rear Side Protectors” (the spats on the rear bumper) are a worthwhile option – I have those on my car… and arguably, so is the “Hood Top Mole” which I believe uses the Bernoulli principle to actually force more air under the hood.

Other than these items, it appears that all other options available for the GT-R were those also available for the standard R33.  For example, on pages 9-10 – the only options that were available on these pages applicable to the GT-R are the bicycle/ski/roof racks, but I have never seen a GT-R with these fitted. Has anyone?

Then on pages 13-14 – again we have the gold GT badges. Honestly not my cup of tea, but they actually might look pretty good on a black or red car? 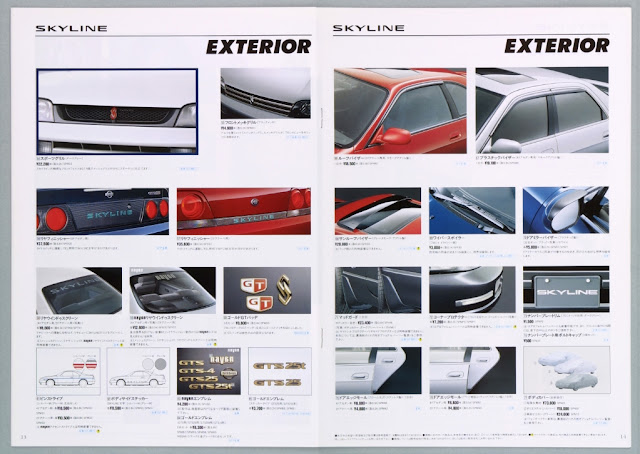 For those who really want to MAKE CLEAR TO OTHERS THAT THEY ARE DRIVING A SKYLINE, why not apply the gigantic rear window sticker?  You know, in case the guy following you can’t make out the small Skyline lettering under the trunk lid – after all you DO want to make sure the guy isn’t riding on your bumper trying to make out what brand of car that is.  And for night – why Nissan also offered an “Electro Luminescent” (EL”) Skyline “rear finisher” (as seen on the red car, page 13). So as you pull away at speed, people can see the electro-blue lighting between the red afterburners. Hmm….

And then of course, some “practical” items such as door edge guards. If I had these on my car, then I would not have had to install those foam pads on my garage wall (really!).

I’ll finish this post with a quick overview of the “Safety” items offered on pages 15-16. Nissan brags about having the “World’s First” “Holographic Marker” system.  Apparently, you look through the loop thing that is mounted on your dash, and the projection unit mounted on the roof of the car does its thing, which is to have 2 poles -one green, one orange - appear at the right front corner of your car.  This helps you park, without having to install those annoying antenna like things as depicted on page 16.  Speaking of parking and safety - the bumper mounted corner sensors on the top of page 16 - the front units were not available for the GT-R, but apparently the rear ones were. Anyone have this on their car? 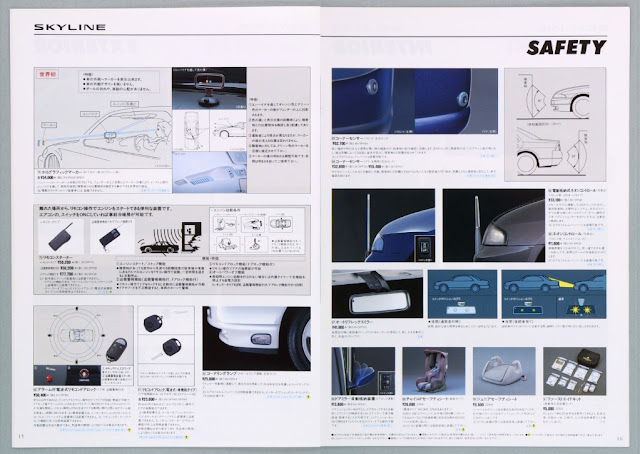 The other items that were available for the GT-R is the auto dimming mirror on page 16.  The ones available now are more advanced, with compasses and garage door openers built in for example, but the mounts are different. Hence I guess if we REALLY want one of these, we are stuck with one of those older units?

Anyway, there are other items, most of them are pretty obvious, but if you have questions on any of them, feel free to drop me a line in the comments section. Stay tuned in a few days for an overview of the interior options!
Posted by Aki at 2:56 PM

Hello, first of all thankyou for maintaining this page, i got a lot of information here.
I got a question which is really hard to find an answer. The front splitter (lowest part of the front bumper) of my R33 GT-R (01/1995) is white. The preowner says it was white when he bought it and it doesnt seem like it were painted after the factory delivery. Now i am searching if there are front splitter that had colors on it at the time when they were delivered from the Nissan factory. Most people tell me they were all black and not painted. but i found a fairly big amount of r33 gt-r photos on the web that look like non modified original examples and they have a color coded front splitter. Do you know if there were an option or a serie that wasnt delivered with black splitters? I really would know that. Thankyou in advance and i wish you a happy 2018. Cheers Reto

Reto, good to hear from you. I have never heard of a car that was delivered with color coded splitters. Because they are made of ABS and designed to flex, and given the paint technology of the 90s, I very much doubt that Nissan would even offer them in painted versions, unless they were molded that color from the factory. Which they were not. Hope this helps!

Hello, thankyou for replying. I would love to believe you. Its exactly what i heard from other people as well. But when you go to your homepage and look at the "NISMO R33 Skyline GT-R Optional Parts Catalog 1995", there are color coded front splitters. Why are they colored when coloring wasnt possible? Also the preowner of my R33 GT-R is a mechanic and has his own business. He told me that since middle of the 20th century they could paint colors that were enough flexible to meet the requirements. You see, i am in the middle of the groups now and i am an absolute rookie try to find the whole truth. Please help me. :-) Greetings from Switzerland. Reto (www.gt-r.ch)

Reto, happy to respond of course! Well, first I'd say that the Nismo parts are not delivered from factory, but installed at the dealership. Second, I re-examined the Nismo 1995 catalog you point out, and the Japanese says that the body parts come as "white gel FRP" meaning that they have to get painted before installation.

In any case, these cars are now over 20 years old, so I suspect you won't see many cars with the original black ABS plastic splitters anymore...

what i dont get is why the preowner says, that it wasnt painted. he insists of saying that its factory white delivered.
there will be no way of determining if the paint was made at Nissan or aftermarket i guess?
I am not a mechanic. i am just a guy that sits on a table to do his work.

Thankyou very much for your answers and i hope to read more of your stories here soon.
Greetings
Reto