So...after having successfully passed the bi-annual shaken, first order of business - have the Mine's front pipe put back on!

As I had wanted to also get the front Nismo underfloor brace - and Hirose-san of Three H Tuning -
- had gotten one for a good price, I decided to try out his shop - and have the Mine's pipe put back on at the same time. So good timing!

Three H is a one man show - Hirose-san's own shop. He's a former Nissan mechanic, and his shop specializes in Silvias and RB series Skylines and GT-Rs. My friend Alex had somehow heard of him, and found his shop. What's great is that, despite it being a one lift shop, it has plenty of the right equipment - as you can see from these pictures. As he is located in Sagamihara (near the Zama and Atsugi military bases) - for those of you who live near the area - definitely worth checking him out!! 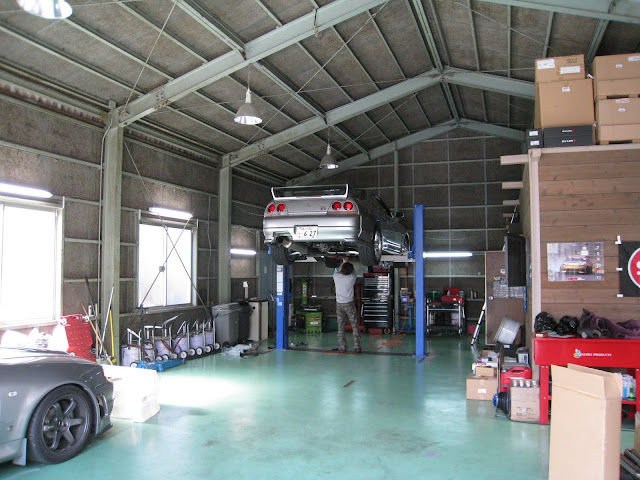 Including, of course, a spare RB26DETT engine! 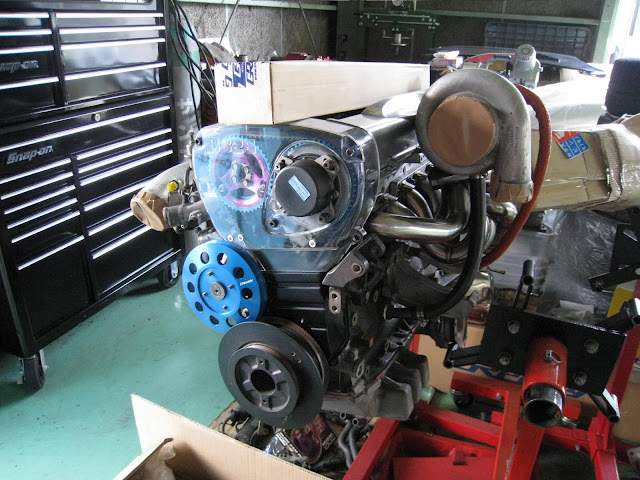 So here is the standard front pipe: 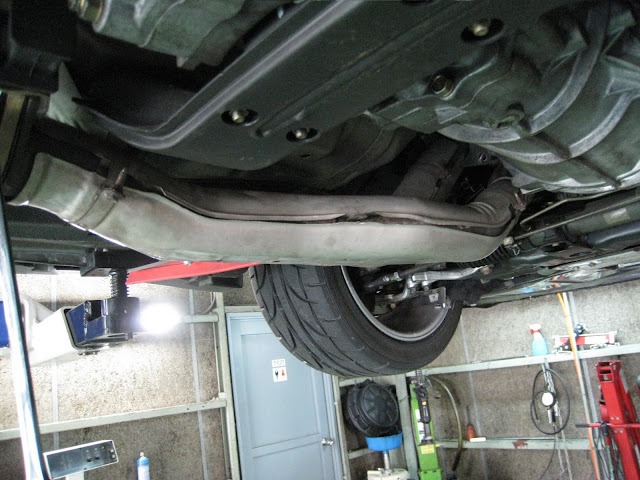 After removing it, looking up towards the exhaust outlets... 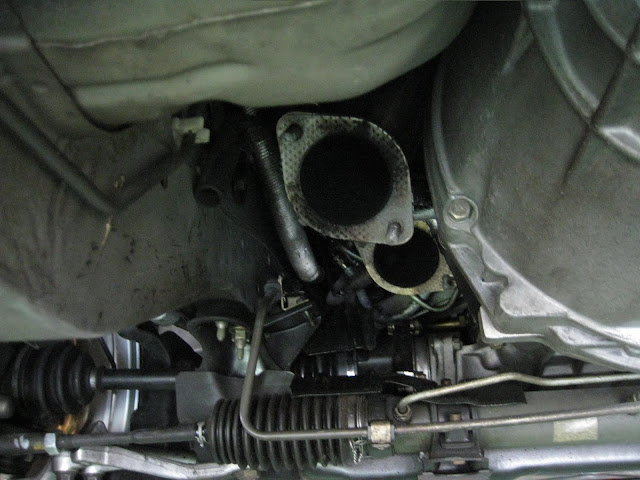 On the left - the Nismo front underfloor brace. On the right - the standard front pipe! 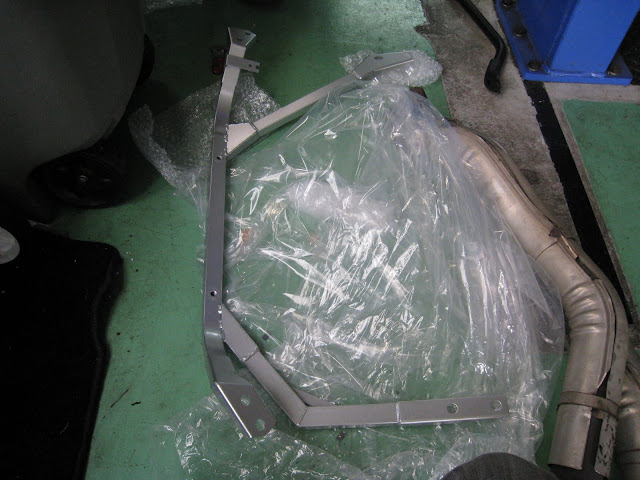 Here is Hirose-san spot fitting the Nismo brace under the Mine's front pipe - as the pipe had been deemed too large - thereby being too low to the ground (min is 9cm, apparently - and with this pipe I am only 7cm off the ground - you can see where I've been scraping!), we were worried that the underfloor brace would not fit. 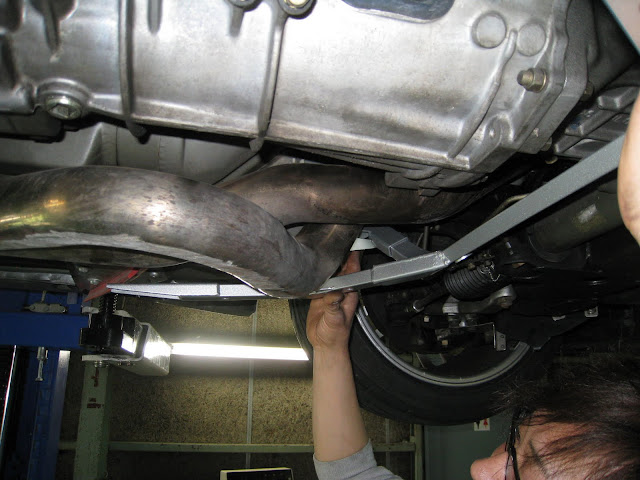 But guess what - it fits! Just barely, with only about 1 cm to spare! Whew! 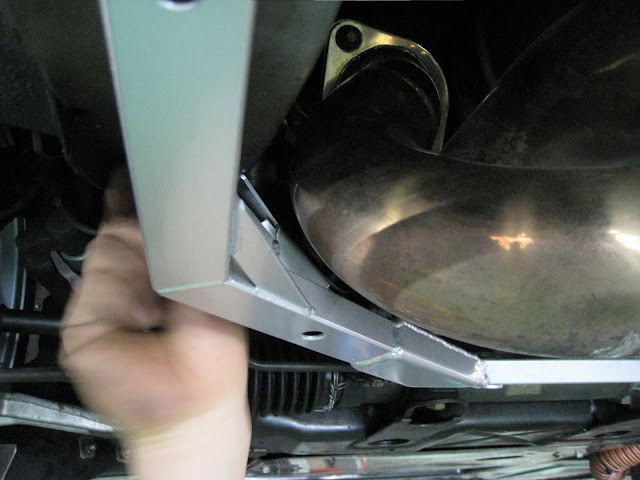 The standard underfloor brace only ties the left and right sides together. This Nismo piece - just like the rear Nismo one - not only ties the front back together, but it also attaches to the steering rack! Here is a close-up. 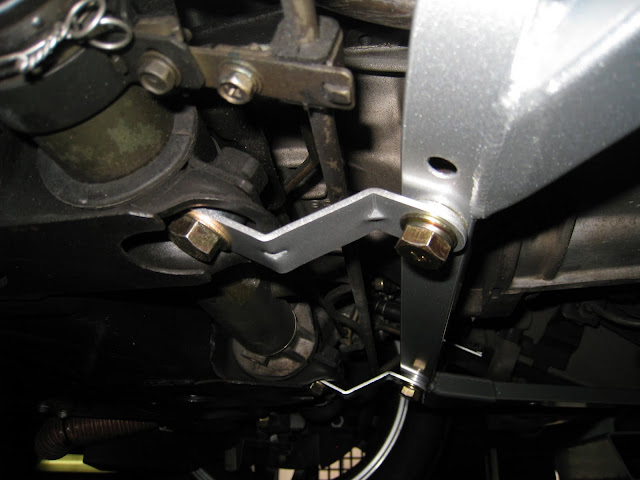 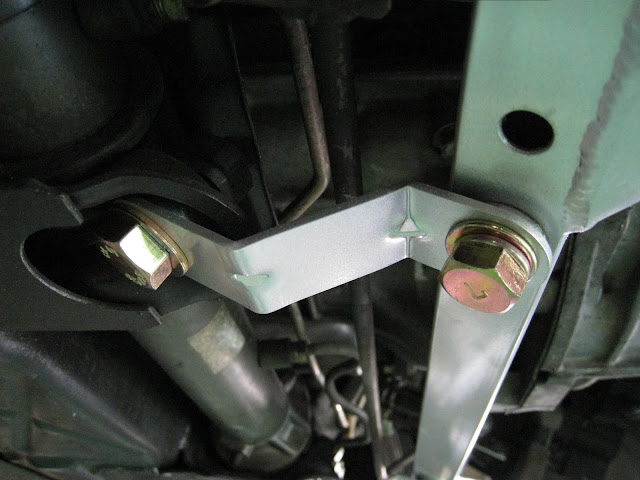 A shot showing the two places where the brace attaches to the steering rack. 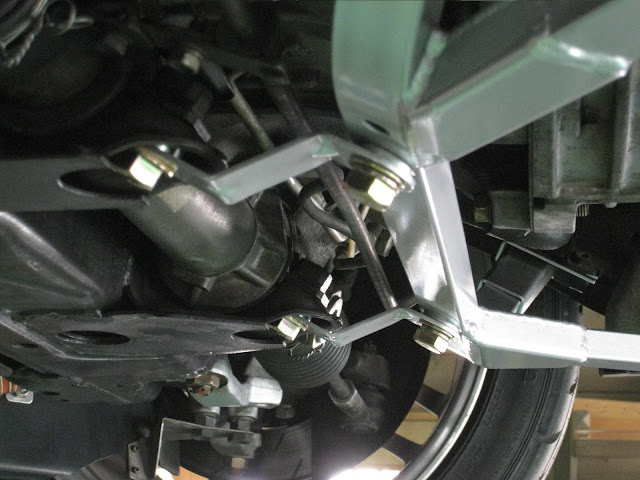 Anyway - got back in the car - and wow - the Mine's front pipe sure makes a difference. Engine seems to respond "just" that much better. Sounds deeper, too. For some reason, with the stock pipe on, the engine felt a bit jittery... too much back pressure? Anyway, I'm happy that the Mine's pipe is back on. Definitely breathing better.

As for the Nismo front underbrace - yes, there sure is a difference. The car has good rigidity to begin with, but with this brace, you can FEEL the body a bit better, and the steering feels a bit more direct. At least to me, the car seems to respond a bit better...

Anyway - future mods will include the Nismo/Yamaha Performance Dampers
- more body rigidity improvements - along with, possibly - the Nismo Rear Member Brace - which are additional bracing that go with the Nismo Circuit Links which I have on my car.

What's cool about the Rear Member Brace is that it was developed for the Z-Tune R34, but made available for all R33 and R34s with the Nismo link upgrade.

However, at least one person in the know has said his lap times got worse when this piece was fitted, giving me something to think about.
Posted by Aki at 10:07 PM