A Couple More Parts for the Interior

So even though I am thrilled at the work that Nismo Omori Factory and Robson did to modernize my interior, there was one final thing that I had left undone. 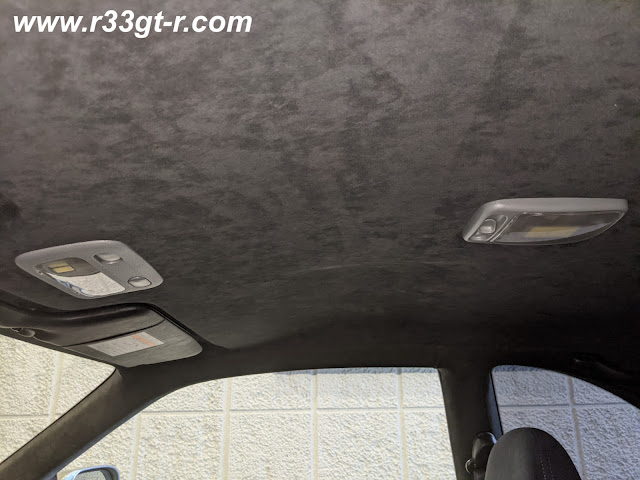 Witness the overhead lamps and the front spot lamps - see how they are still the original grey that I had before the black alcantara lining? Below you can see how the S15 Spec R visors I got are black, and even though they are Nissan OEM vinyl, match the interior much better.  And yes, before anyone asks, I had thought about getting Robson to re-do my OEM sun visors, but as I will explain in an upcoming post, there was an OCD level reason for my decision to use the S15 visors. 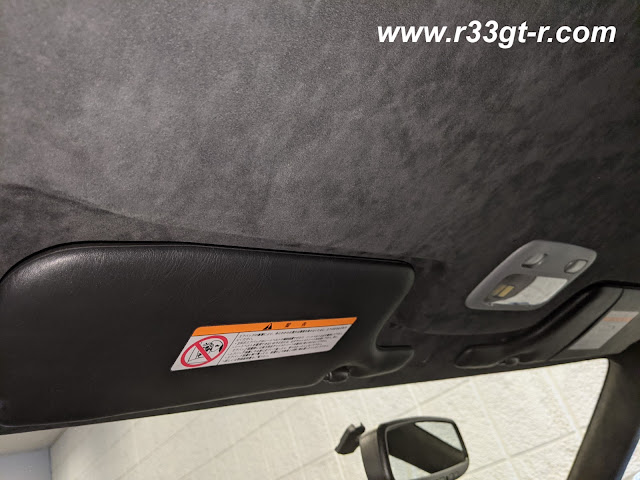 Anyway, with respect to the two overhead light clusters, I had asked Nismo Omori about the CRS car, and I think someone told me that they had simply painted them black. I will have to check it out next time I am at Nismo, but for me, I decided the easier way for now was to find the equivalent S15 Spec R ones, which came in black plastic.
It took awhile, but after a few months of searching on Yahoo Auctions, I was finally able to find the two pieces I needed in used, but decent condition. 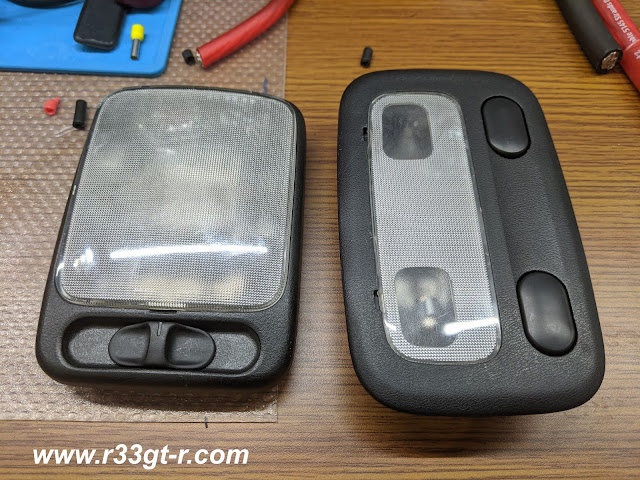 First thing I did of course was to open them both up to make sure they had all the required internal lighting parts. And behold, they even came with the lighbulbs! 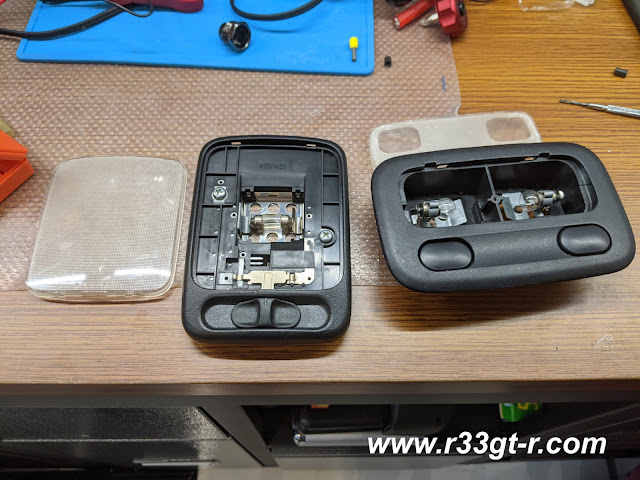 Back to my car - long time readers will know that a few years ago, I had evolved from a "white" interior LED bulb to PIAA's COB flat LEDs.  These COB LEDs are super bright, and while I think as my friend Matt will no doubt remind me there are now LEDs that replicate daylight (link please Matt?), I haven't yet gotten around to making that swap.  These PIAAs however are extremely bright and since I don't drive my car enough anyway...
Here is a close up - see how they use the light bulb form factor to be able to be retrofitted to these older cars: 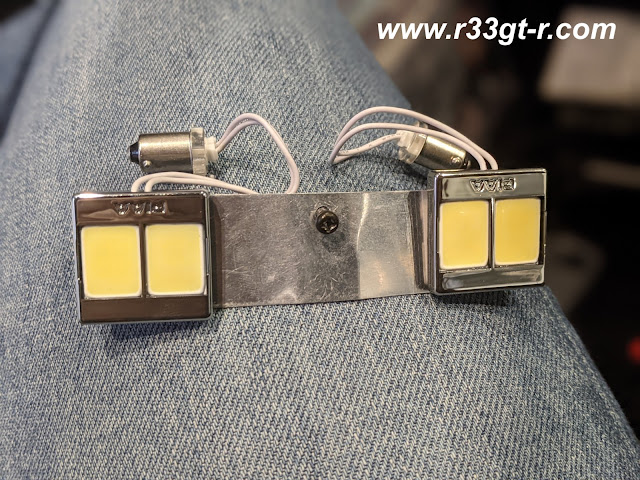 So it was easy enough to take out the bulbs, but now I had a problem. I couldn't figure out how to remove the plastic unit, as there were no screws! And I wasn't about to start pushing and pulling and risk damaging the Alcantara... 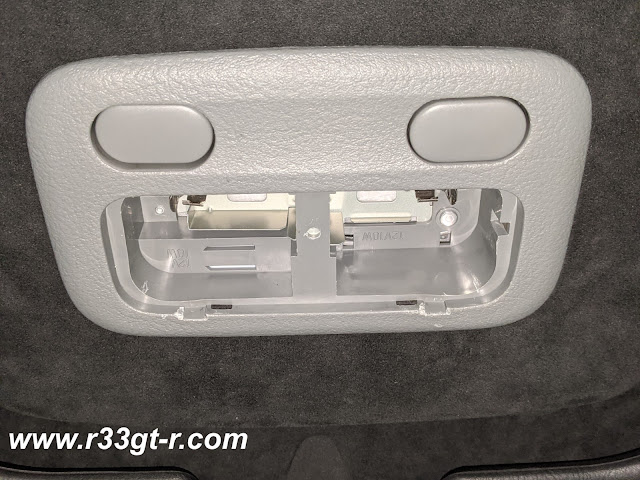 So I shifted my attention to the center light unit, which I know has screws that attach it to the ceiling. After removing the clear plastic lens you can see the PIAA COB I installed. 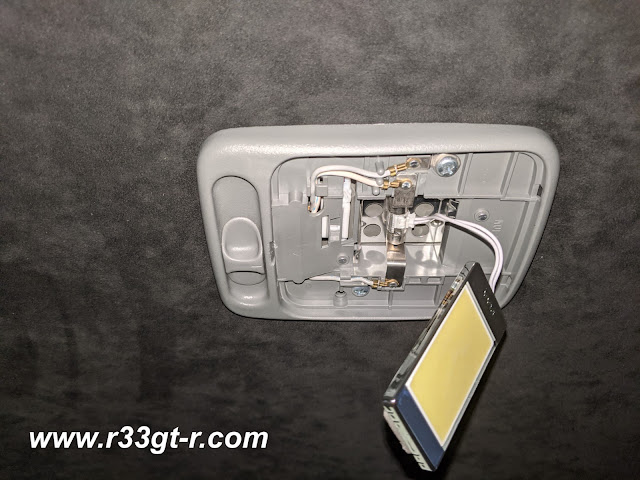 And yes, a few turns of the screwdriver later and the unit just dropped out. I DID have to undo the wiring harness clip though. 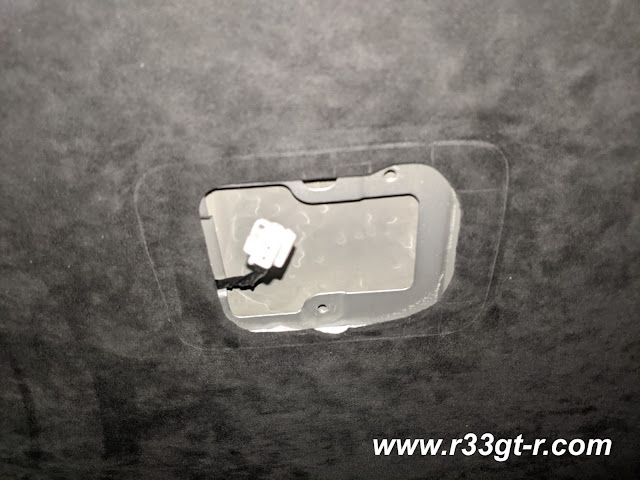 Speaking of the harness clip, that turned out to be a momentary challenge. Take a look below at the green arrows, my old unit on the left has the white female clip facing to the right, while the black S15 unit has no such separate female clip, with the terminals being built into a molded in clip and facing left.
The technological advancement continues on the underside as well - see how the R33 unit has actual wires connecting the bulb leads with the switch, while the S15 unit seems to be built with a one piece metal circuit. 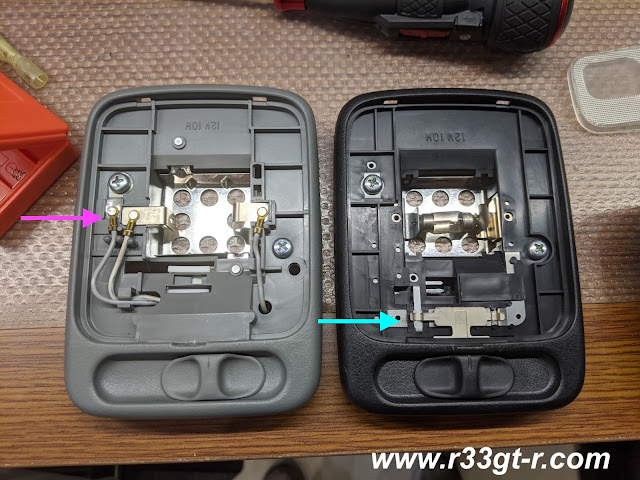 In any case, I hooked up the S15 unit to the male connector on the car side, and was able to confirm it worked! 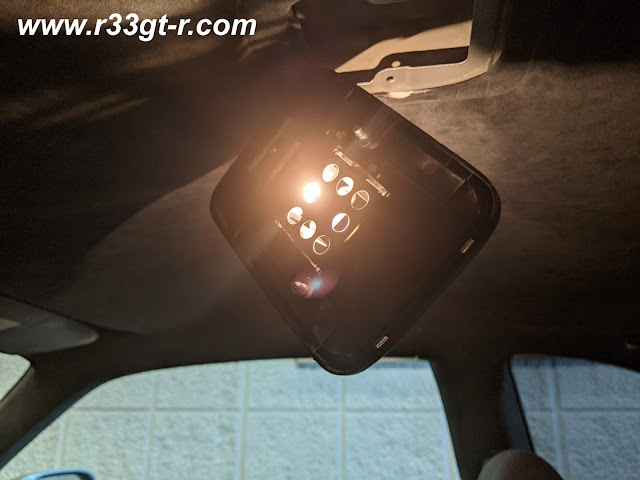 Very hot bulb, but I managed to get it out and replace with the PIAA COB LED unit. 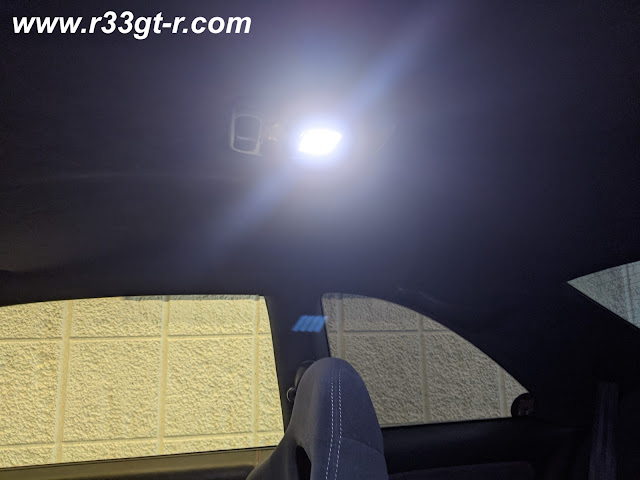 Oops, forgot to turn it off. Here it is now. 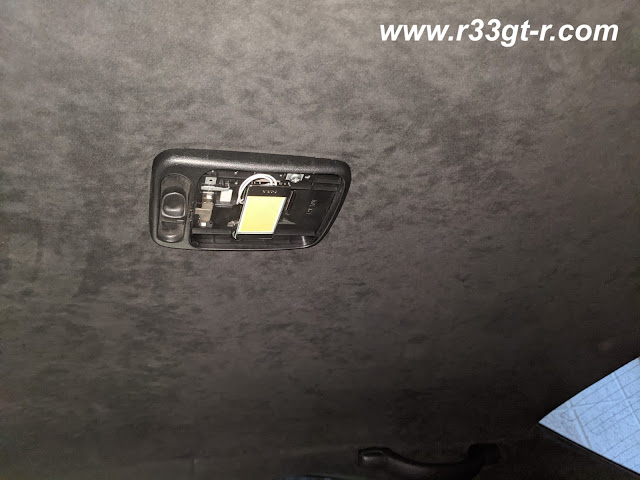 Meanwhile, now having a pair of clear lamp covers, I decided to see which one was in better condition, as they are interchangeable - and why not use the cleaner one? 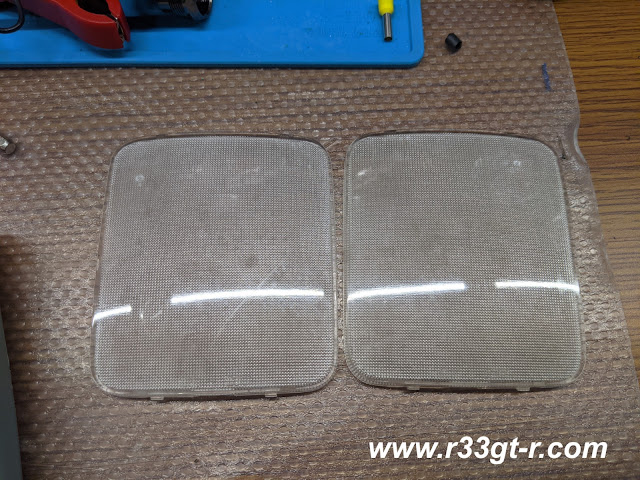 At first glance, the one on the right (which came with the S15 unit) DOES appear cleaner.  But, I got out the Novus plastic polish just in case. 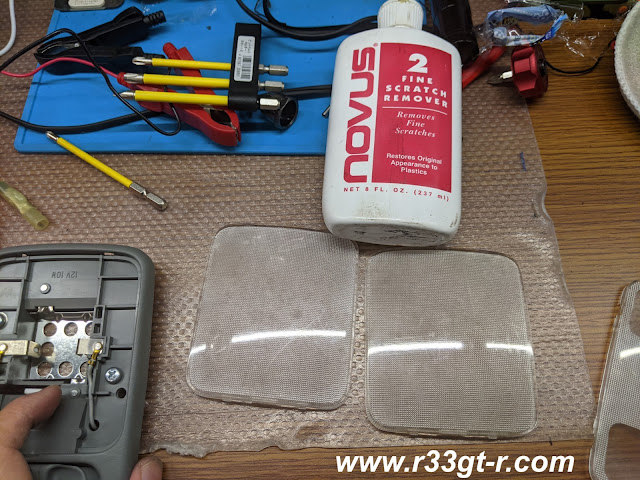 I also decided to extend this prep to the clear lens for the front spotlights - the S15 unit is on the bottom. 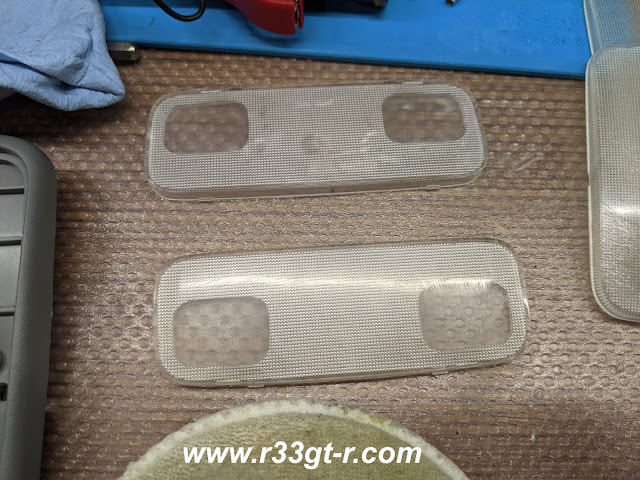 After polishing all 4, this is what I ended up with. And yes, the S15 ones were in better shape. 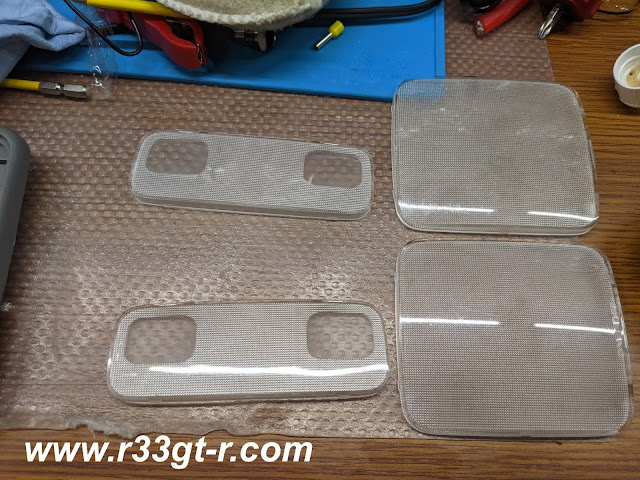 Now, I finally had a chance to figure out how to remove the front spotlight unit assembly. Looking closely at the S15 one, I noticed one side had a metal clip, while the other was solid plastic. 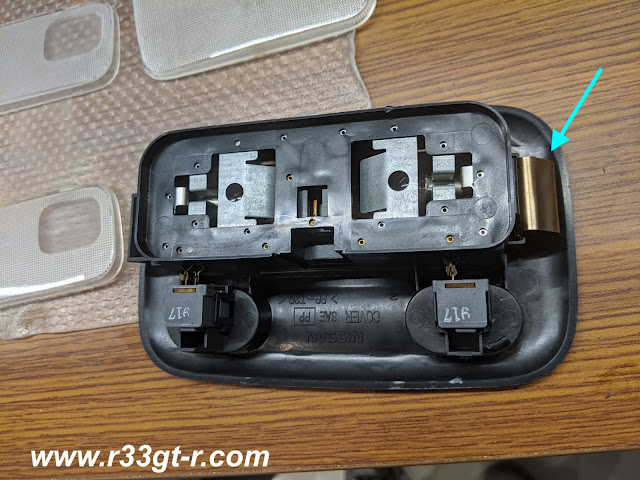 That was my AHA moment. So I decided to use some Novus to clean this piece up: 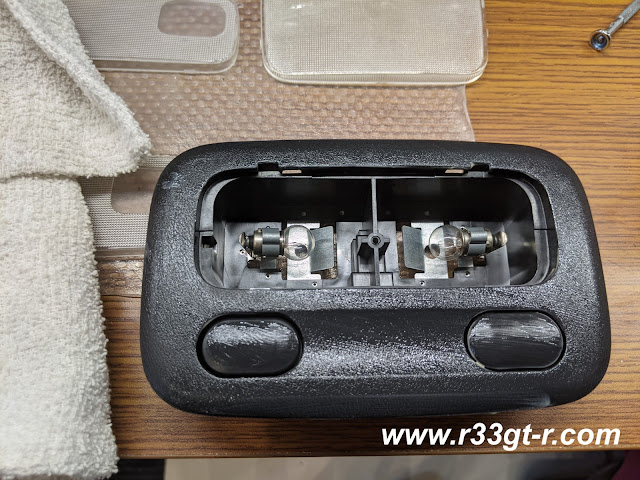 And then after some scrubbing and a wipe down: 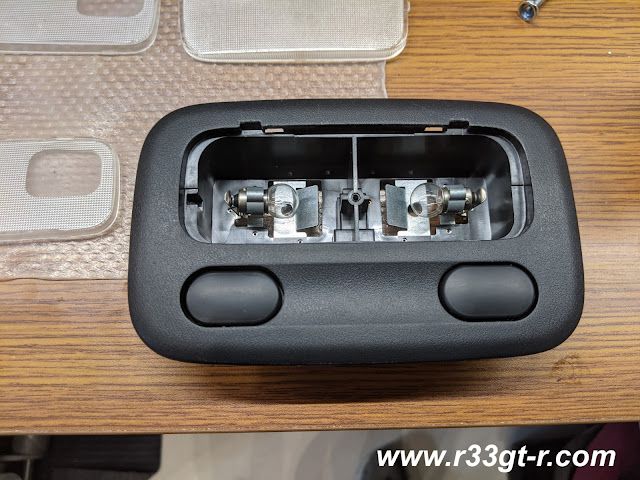 I was able to pull the R33 unit towards the right, where the metal clip is, and then pop out the left side. It happened very quickly!
These two units ALSO had some mechanical differences.  Again the terminal clip is built in on the S15 one (yellow arrow) while the R33 one had the separate external clip (light blue arrow). 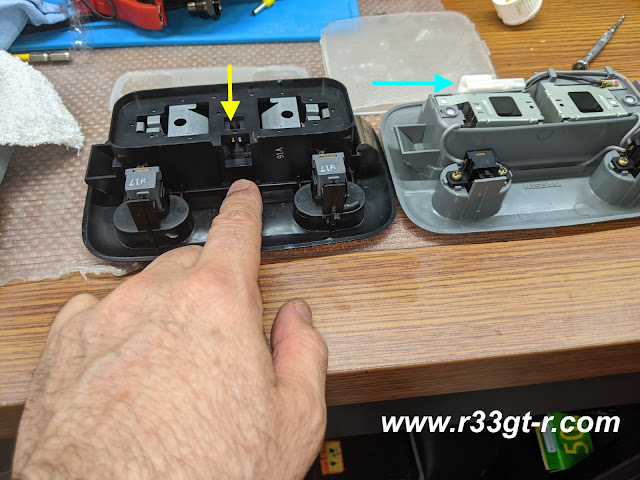 And on the bottom side, differences as well in how the bulbs are held in place. 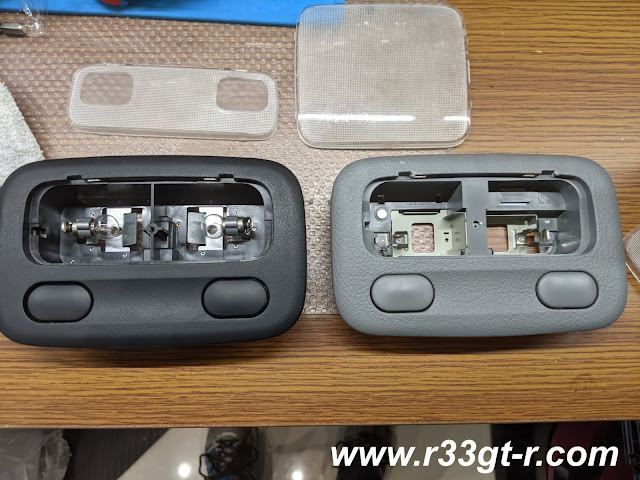 Here is a close up of the S15 one - you can see how the bulb goes in and then is twisted/locked into place, due to the indent (light blue arrow). 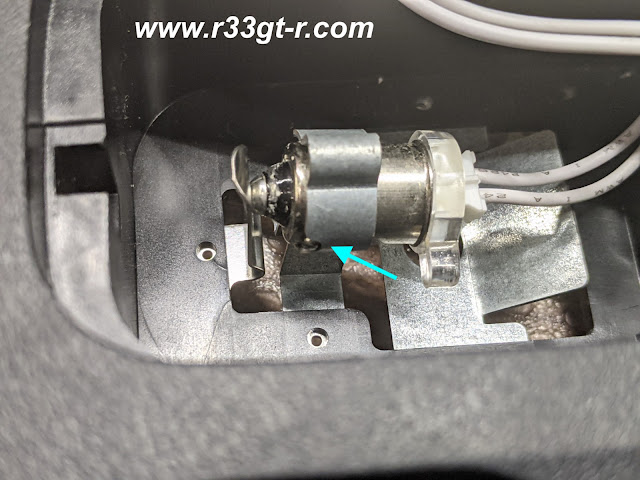 It was a small struggle to reinstall the two PIAA COB LEDs that I had mounted to a strip of spare aluminum, back when I first installed them. (I had to bend the aluminum a bit to make them fit better - or rather, exactly square this time!). 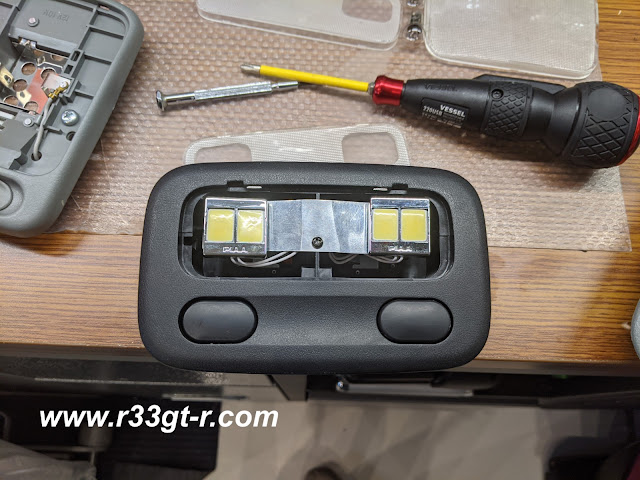 Installation was the same as the center lamp, as the harness was long enough to reach around and snap into place nicely 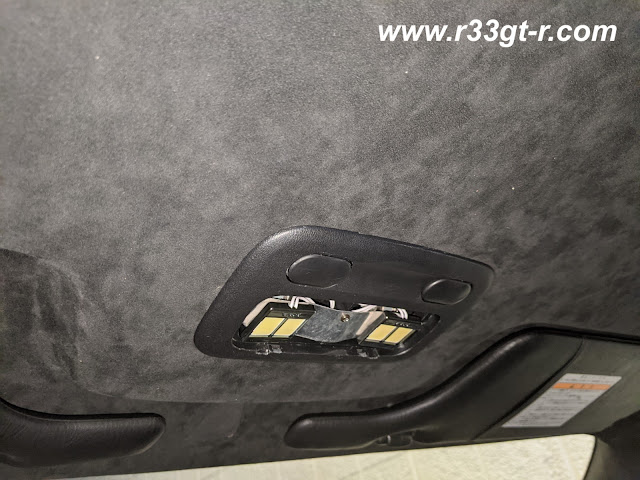 And once installed, I went ahead and snapped in the cleaner clear lenses for both. 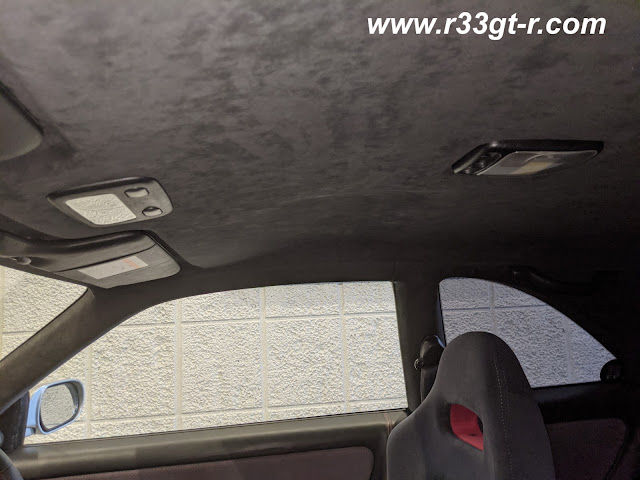 So what do you think? Slowly but surely, fixing the small details is really adding to the overall impression and quality of my "modernized" R33 GT-R!

Looks great, I didn't know that there were all these little parts that interchange with other cars.

Currently my R33 is out of commission due to a coilpack melting down, fingers crossed I figure out that issue soon...

Sorry to hear about your R33 OOC... but yes, that is the beauty of having a mid-90s Nissan when they were trying to save money in building their cars! Good luck and hope you are back on the road soon!

Bro don't get me wrong I love your R-33, when are we getting some post on the Lonely IS-F?

Full colour spectrum interior LEDs are made by PIAA.
https://www.piaa.co.jp/category/4rin/light/backup-led/#12sub07

These aren't as bright as what you are currently using though.

Thanks Matt, something to think about!

Pablo - actually working on one now! Check back in next couple of days!

Can I have more details and pictures on sunvisors. How they fit, bracket swaps all that good stuff. I've got normal grey ones and have turned yellow 🤮

Re the sunvisors, I had Nismo Omori Factory do the replacement work. I tried to do it myself but was afraid to snap those plastic collars, so in this case, left it to the pros...