While swapping the LEDs in the gauges back to some unique handmade ones, I began wondering whether the LEDs I've had in the interior probably needed to be upgraded too.  I had long been suspicious about the Luxer1 brand LEDs I installed for the interior center dome light (and the front spot lights) some time ago (can't recall but probably 2008ish?):


Slick packaging, and although specifically tailored to fit certain cars (i.e. BNR32 and BCNR33 here), as I hadn't really done my research, and also because I bought this back when LEDs were first becoming a popular aftermarket mod, I was always suspicious as to whether these LEDs, although certainly WHITER/BLUER than the OEM bulb, were not as strong from a brightness (Lumens) standpoint. For example, reading maps and other text became harder at night...  It also appeared that, like I experienced with the gauges, there might be a problem with light dispersion?

Recently however I stumbled upon this from PIAA:
These are supposedly a new type of LED - flat one piece, so thinner. These are called "COB" or "chip on board" LEDs which are supposedly brighter than SMDs.  Here is a link for more information about this type of relatively new LED.  Power consumption is 3W and a lumens rating of 170!  More importantly, the PIAA website showed that the OEM dome light is an 8W, 95 lumens bulb, so this means that this LED product should be almost twice as bright.  Further, they claim better light dispersion as well versus other LEDs.

And, as you can see, size-wise it's a bit smaller than the Luxer1 product:
The PIAA product comes with 3 types of adaptors (for T10, T10x31, and G14 bulbs), as well as some double sided tape to secure the LED board. I also like how the LED is embedded into a nice chromed aluminum form factor.

It's hard to tell from these photos, but here is how the Luxer1 product looks:

With the PIAAs, the LEDs were so bright that:
I could tell from the moment I plugged in the PIAAs, they lit up the entire cabin much more brightly than the Luxer1s.  Then, after I used some double stick tape and secured the PIAA unit to the dome light mount, and started testing the unit: 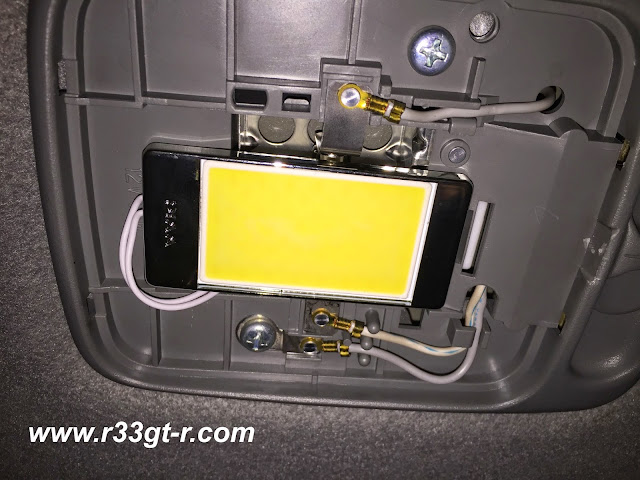 I also immediately realized that the PIAA's Kelvin rating, at 6000K, provides a much more natural light than the Luxer1s (which are more bluish, probably around 7000K).  This is because I still have Luxer1 units up front in the spotlights, and can compare the difference, not just in brightness but in color as well.  Also, the claims were true - this LED design DOES provide a wider, more disperse light.  You can see the color difference, as well as how the PIAA's light is more diffuse, in this photo:
I actually had only been planning to do the update for the center dome light, but I was impressed enough that I immediately ordered and then installed the "MultiD" version from the same PIAA series for the front spot lights:

Like the MultiA, I love the form factor and the shiny aluminum construction: 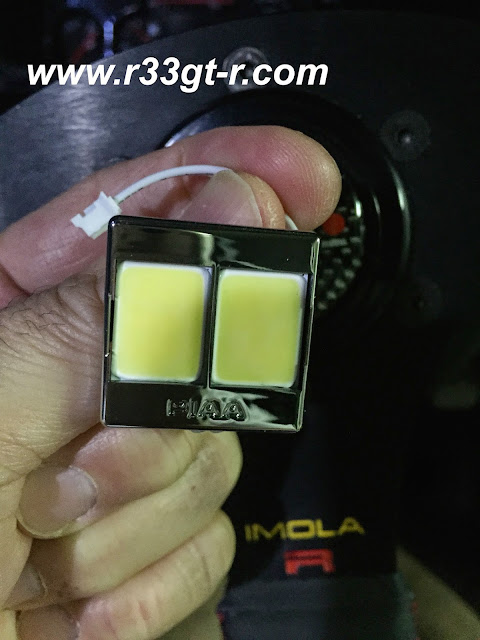 Initially I was going to search for actual aircraft style spot lights that could replace this whole front lamp assembly, but then realized that it would be easier and cleaner to keep the housing but upgrade the LEDs.  Replacement was as simple as unplugging the old and plugging in the new:
And, as the following pictures show, there was no need for a dedicated "spot lights" - these work just fine! Note that for all 4 photos that follow, the lighting used was as show in the above photo - that is, the Luxer1 LEDs were on the left side of the front light assembly and the PIAA was on the right; one was turned on while the other was off (in alternating fashion):

As a friend jokingly remarked, it's like having daylight in your car! Just in case you thought the steering wheel comparison wasn't fair because the PIAAs on the right are closer to the wheel, check out the following.  Can't believe how dark the Luxer1s now appear...


So this mod is highly recommended, if you want to use LED lighting (too bad I don't get paid by PIAA lol).  Not only does the PIAA throw off close to twice the OEM light, compared to at least the previous LED product, the output is noticeably brighter, wider and more natural in terms of the color.  Although, I DID notice that the PIAAs actually run HOT if left on for a while, unlike the Luxer1s.

This is fun! I think I will tinker with LEDs a bit more in the future... stay tuned.
Posted by Aki at 2:04 PM

I need to find myself a PIAA stockist!! Lovely updates as ever. Hoping all is well for you Aki.

Abdul - thanks for the kind comments. I really should set up my own e-store, so we can cut out the middlemen.... What do you do think?

Will look these up, hope i can find them on ebay. I used to have some kind of Aussy LED dome light in my GTST but it wasn't this strong!

guys I just checked... Try Amazon.co.jp sometimes you can get stuff from Japan from them!

No harm in setting up your own e-store.. With your excellent reviews it could well be a hit!

p.s. In other news, did you know that your friend Ross' BNR34 has been written off?!

Lol likely am too lazy to bother unless I team up with someone to do the legwork!

Yep, heard about Ross' car. Real shame how it happened. Hopefully I can convince him to rejoin the 33 community!

Hi Aki. I am a huge fan of your blogging! Reading your blog inspired me to start my own.

I was wondering if you have an email address you would share? I did not find anywhere on the blog.
I have some questions I would like to ask you.
If you want you could send an email to: Igesund@icloud.com

Hey, Jake here again. I was looking into this upgrade as well for my interior dome lights. Question, does the map light upgrade still allow you to turn either the right or the left map light on? Do you get two in the package you are showing? Thanks again!

Jake - the dual PIAA thing I showed - that is for one side. So I used 2 (in 2 packages) to get both left and right map lights working. HTH,