Continuing from the previous post - (How the R33 GT-R Improved Upon the R32 GT-R (Part 1 - Aerodynamics and the High Traction Layout), the following items seem more mundane and evolutionary, versus revolutionary.

Also, these are areas that have been widely discussed in the English press and so the big improvements may not be new to you - however, I still discovered items of interest, as described below.

First, however, this video - this was a promotional VHS video sent to Nissan dealerships upon the launch of the R33 GT-R, to be shown to prospective customers - it's Nissan's explanation as to how the R33 had improved on the R32 (yes it's all in Japanese, but the visuals... and engine noise... and the amazing acrobatics while being driven hard at Nurburgring (at about 8:50 onwards) are worth it!):


Not surprisingly, the video describes or mentions, in addition to the items in this post, most of the items I wrote about, not just in the previous post but also much of what appeared in the design trivia posts (Part 1, Part 2, Part 3).

Engine:
Basically the same, except boost was raised in response to Nissan test drivers who wanted more torque and response.  This resulted in 1.5 kgm more torque (to 37.5kgm) and more horsepower, although due to the gentleman’s agreement, power continued to be listed as “280ps.” Engine management (and thus response) was improved as the engine ECU was changed from 8 bits to 16 bits for more detailed engine control, response and reliability.

Side note: Something that Nissan did not publish, however, is the claim that the standard R33 GT-R RB26 blocks are actually more rigid than the R32 ones, due to slight changes in the block design (i.e. improving the ribs in the block). [Note: Even though this is published in my sources, I have never heard this claim before. I would take with a grain of salt.]

With the BNR32, in addition to high speed corners being tricky as the car generated lots of understeer, there were also times where traction was not satisfactory.  So the goal with the BCNR33 was to have it behave exactly as you wanted it to.

Yes, everyone knows by now that the R33 GT-R V-Spec model came with the electronically controlled Active LSD, while the standard BCNR33 did not. This leads many to believe that the standard R33 GT-R uses the same ATTESA system as the R32 GT-R… which is true for the hardware, but NOT the software.

Hiroki Sasaki, in charge of ATTESA-ETS in Nissan’s Chassis department, explains that the problem with the R32 was that it understeered badly, it simply would not turn.  They researched the issues, and ended up changing (the software on) how the torque split is done.   As a result, the R33's handling is more precise. The R33's ATTESA ECU is able to take into account more road and speed conditions, using higher capacity (higher limits) sensors, to better tune the car's response in light of the driving conditions and compatibility with the tires.

For the ETS-PRO, they initially borrowed the Active LSD that was already being used in the standard (2wd) R33 in a quest to maximize real wheel traction. However, initial testing did not go well, so the engineers spent a lot of time experimenting.  They finally got it to work well, but this also was due to improving body rigidity and tire performance, finally better.

Here are a few photos of the active rear diff - note that it has the finned cover, which the standard differential does not.

The end result is, ETS functions in both R33 GT-Rs to make the car much more FR-like than the R32.  And, with the ETS-PRO, the active LSD allowed Nissan engineers to say the the V-spec is “the GT-R we really wanted to build, with superlative performance.”

Brakes: all cars, both V-Spec and Standard trim, came with the Brembo brakes that made their debut on the R32 GT-R V-Spec models. I occasionally hear about the odd R33 GT-R that doesn't have Brembos on it... unfortunately, those were stripped of the Brembos before being sold to the unsuspecting new owner. 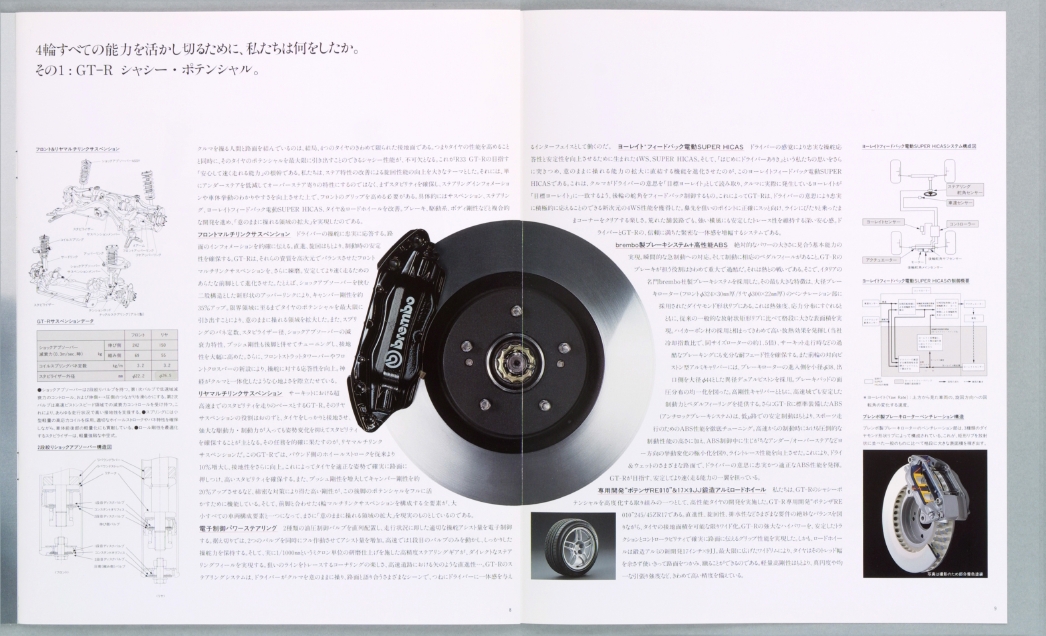 Super HICAS:  The R33 adopted the electrically driven Super HICAS versus the R32’s more primitive Super HICAS which was hydraulically driven, heavier, not as precise and did not utilize a yaw sensor. See my technical note about this from an earlier post.  HICAS appears to be a touchy subject - many people claim that "HICAS kicked in" to explain why they lost control of their GT-R.  I believe this is the result of people not understanding how HICAS works, and not understanding what else could cause handling issues - HICAS is an easy culprit to blame, especially given the number of hydraulic HICAS equipped R32s, the fact that many tuners sell lock out bars, and the apparent complexity of the mechanism itself.  I'm doing research on this issue, and I hope to be doing a future post on this topic, soon.

Putting it All Together:  Along with a more responsive intercooler, all of the changes mentioned above and from the previous post resulted in a car that Nissan engineers claimed was more responsive and faster than the R32 GT-R, as demonstrated by the significantly faster performance at Nurburgring (in Japan, the advertising copy was “Romance of minus 21 seconds”).

Here is the "romance of minus 21 seconds" commercial:


Hiroyoshi Kato, Nissan's main test driver, explained that (due to all the technical improvements, especially the ones mentioned on this page) "the R33's performance completely surpasses the R32s... the first we went to Nur (with the R32), the Nissan team was completely intimidated with how Porsche was testing, but by the time we had the R33, in our hearts we believed we could kick Porsche's ass." (Quote from "Nissan Skyline GT-R R33/R34, Neko Mook 1377")


By the way - here is Nissan's official profile (in English) of Kato-san: Nissan Legends - The Man Who Found His Calling -Hiroyoshi Kato.


Next - time for some mods for my car (finally)!