So I finally got a call from Mine's Takayanagi-san to update me on my car.

Here is what he told me that they've found so far:

Apparently, they found most of the water in the cooling system, gone! So they suspect a broken hose somewhere.   No visible damage anywhere, so likely they will have to lift up the car and/or remove the engine to be sure.

Luckily, I only drove for about 10 minutes once I saw the smoke so there is unlikely to be any damage due to overheating, however Nakayama-san will be inspecting the head of the engine to make sure there is no damage. (keeping fingers crossed, that sounds expensive!!!)

Additionally, they found that the water that remained, was rusty. This is probably my fault, I can't recall the last time I had the coolant changed - I thought it was a couple of years ago - and I've never had any cooling issues.  Takayanagi-san doesn't believe I need a new radiator, but it (and the whole system) will simply need to be flushed out thoroughly.

By the way,  I've circled where I saw the smoke/steam coming from: 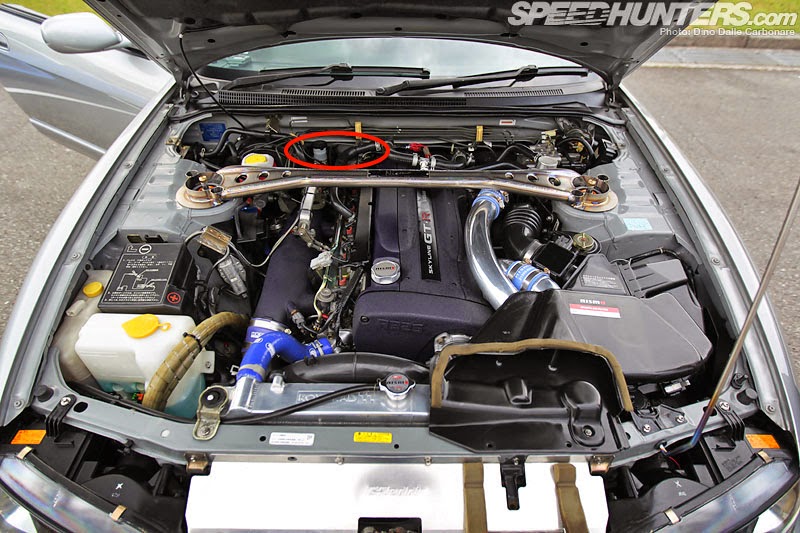 In any case,  I will let them first diagnose exactly where the leak is coming from, but assuming that it is a hose that gave way,  I think I will have to replace some of those hoses back there with something stronger.  Steel braided looks nice, but my understanding is that silicon hoses are just as strong and reliable (so long as you use the proper clamps) and steel braided's drawback is that the braiding prevent you from finding the source of a leak quickly.  People's thoughts on this? If I do silicon, what color? Blue or black? (note I already have the Samco set for the radiator, in blue).

Definitely blue, matches your engine. And maybe its time to get a few Defi Gauges to catch these kind of things early on. Plan on doing so my self.

Yeah I like the blue hoses too... At the same time I like the stealth look. Gauges are a good idea, but I have another idea..

I have a silicon kit installed for 3 years now. No issue.3 to 4 ply all around with 5 ply on radiator hoses. Just make sure the ones you get are at least 3- 5 ply. But its important they are not accidentally cut when installed. A bit of oil on the fitting and the inside of the hose helps a lot when you are sliding them on or the inside of the hose may get cut or damaged.
Black stealth would look great in your engine bay I reckon. Either way they all look great just different.
Good luck mate