Sunako-Jukucho is Back! (or, how I got ready for the SSCT Track Day at Fuji) 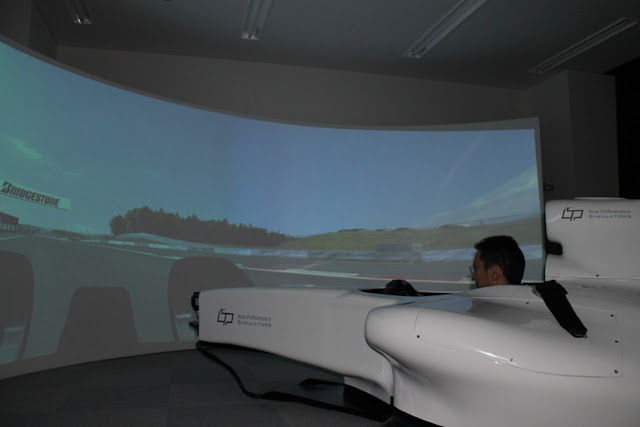 Anyway, I was pleased to find out that his retirement from the car world was short-lived. At a recent social gathering, I found out he was back in Tokyo and now in charge of introducing the Base Performance Simulator (one of only 5 in the world) to Japan. Essentially, it is a high performance racing simulator, kind of like the PlayStation Gran Turismo game series...but on steroids.

Developed by double LeMans winner Darren Turner, the BPS system is recognized as being literally one step below the full on million dollar simulators F1 Teams use to train their drivers. Read more about how fantastic this simulator is here.
http://www.baseperformance.net/

Due to my status as a former juku-sei (prepschool student) of his, I was lucky to be invited to try this machine out before its unveiling to the paying public.

As I had been recently too busy to really think about my past driving both good and bad at Fuji, this was a perfect opportunity to remind myself of my weakpoints - ie sections of the track that I always seem to have trouble with - and work on improving my techniques not only by driving in the simulator, but getting advice directly from Sunako-san.

How fantastic is this? I can try different things before actually hitting the track and risking damage to my car (as well as any others that might happen to be there if I spin out)- Fuji is a high speed track after all, so a mistake can be expensive!

First time I hopped in, I was embarrassingly slow. Yes there was some initial disorientation - I mean the displayed images made me dizzy in the beginning, but then you get used to it. The wheel has force feedback, but this simulator doesn't move up, down or sideways like some others. But it was also the vehicle I was virtually driving, a GP2 formula car... The thing accelerates so quickly that if you're not careful, just like in real life, your car suffers oversteer and... yes, you spin. And braking - no power assist here! Just like a real formula car. And the force feedback is so strong sometimes I was glad I heeded Sunako-san's advice and brought my racing gloves. So getting used to the virtual car for me took some time.

But once I started getting used to the formula car steering wheel, and the DSG style shift paddles, and the acceleration and the braking - then it quickly became apparent that I had a whole list of weak points on how to drive the Fuji track itself - for example, how to take the Coca Cola corner properly without upsetting the balance of the car, the proper entry speed and clipping points for the 100R, braking and acceleration points for Netz Corner, and the proper line for Panasonic Corner - and those are just the obvious ones.

And the result - during the actual SSCT track day, I found myself flying through Coca Cola corner with no fear, my car behaved exactly as predicted and simulated. Other problem areas were not much of an issue too, although the number of cars on the track that day made taking the ideal lines more the exception than the rule...but anyway, the simulator did its job and got me prepared!

No photos from my first session, but after my actual track day at Fuji, I went again - this time with another juku-sei, Russ of RE-Xtreme. Here are some photos he took, plus some more on his blog entry: http://re-xtreme.blogspot.com/2011/12/base-performance-experience.html

So check this out - First Corner approach (Russ driving): 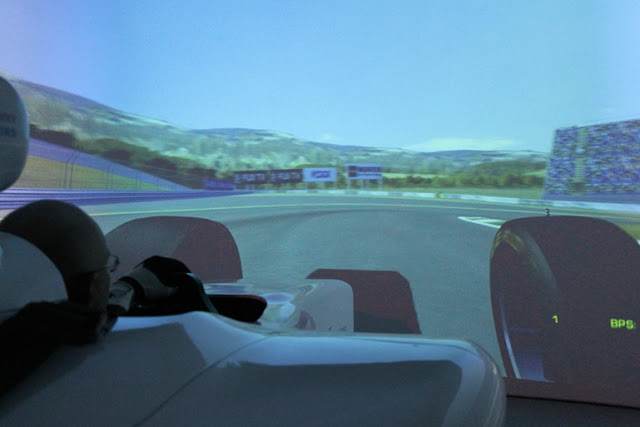 Then coming out of first corner, accelerating and mentally getting ready for Coca Cola Corner (me): 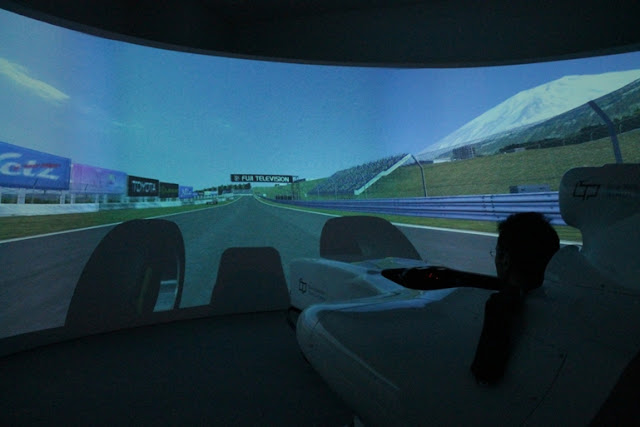 Getting ready to brake before Coca Cola (Russ): 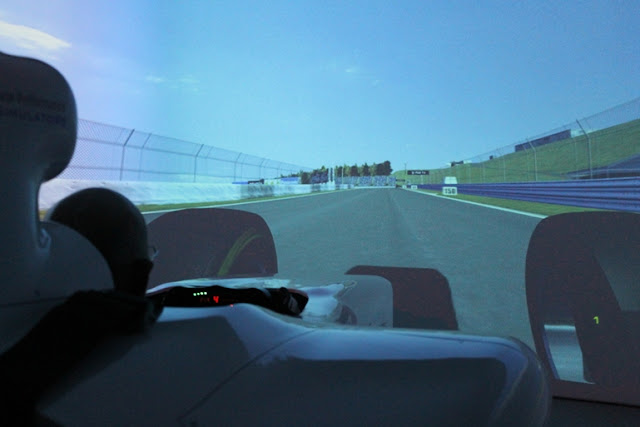 Another tough corner for me, Panasonic Corner (and what's distracting is, that LCD billboard on the upper right, ACTUALLY plays Panasonic TV commercials...!!!) 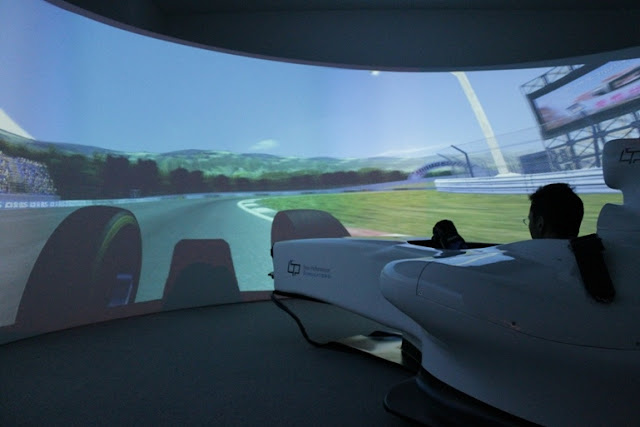 Then down the straight: 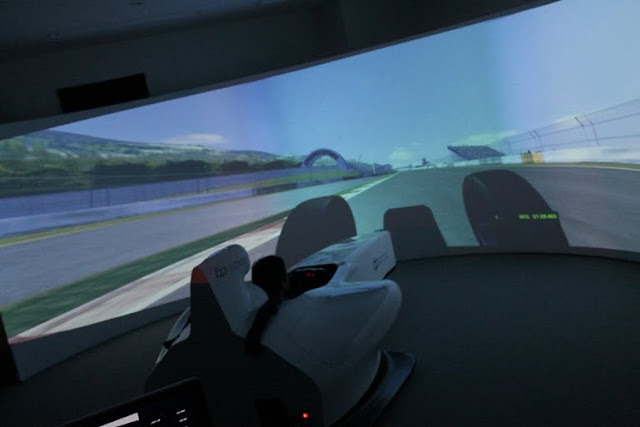 Then the Motec software, which keeps a running tab on what you're doing, displays it all for Sunako-san to breakdown and analyze. Brutally. 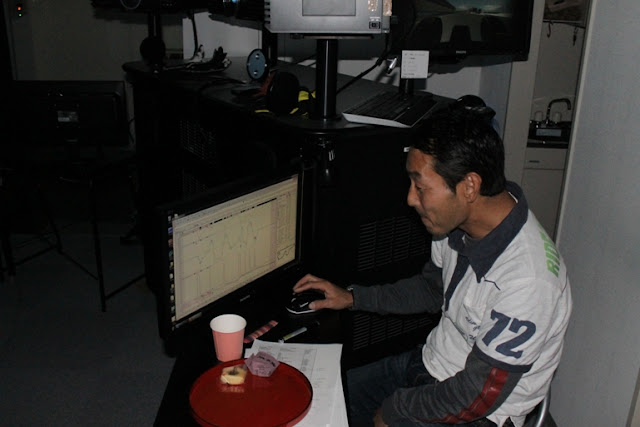 But you know, I'm really glad I had this opportunity. It's so much better to spin out and wreck virtually than in your own pride and joy...

Anyway, for those who might be interested in preparing for their own track days, the simulator has, on file, in addition to the major tracks in Japan, dozens of tracks from around the world, ranging from Laguna Seca to Nurburgring.

Actually, the true benefit of this simulator is - my car is already very well prepped - I am the weak point. So instead of going to the track, which costs time and money, plus puts wear and tear on the car, polish my driving skills on this simulator first! So next time, I will hopefully be able to extract the maximum potential of the car...

For more information or to arrange your own session, Sunako-san can be contacted at: sunako@yukes.co.jp

Here is a link to his blog, where, in addition to more pictures and information on the simulator, if you read long enough, you may stumble upon a picture of me...
http://star.ap.teacup.com/sunakojyukuchou/