Mods for the Track Day, Part 2

Ok so I think we can all agree that changing out the stock steering wheel for the Ital Volanti one was a good move. Whether I can justify it on a street car - I now have no driver's side airbag - remains to be seen (although I have read somewhere the airbags, especially those made in the 80s and 90s, tend to only have a shelf life of around 10 years...)

Another mod that I did - well to be honest it is harder to critique. Either I'm not sensitive enough of a driver (see my next blog post...) or the improvement it made to my car's performance is too subtle to be noticed unless the car is driven on a circuit which results in the rear stepping out more, and causing the front wheels to have power going to them, thanks to the ATTESSA operating.

That's right, despite harsh critiques on the GTROC forum,
http://www.gtr.co.uk/forum/158861-digital-g-sensor-improve-attesa.html

And the fact that apparently someone somewhere is actually developing a new programmable and faster ATTESSA ECU -
http://www.gtr.co.uk/forum/150416-upgraded-programable-faster-attessa-ecu.html

I chose to go ahead and buy this: 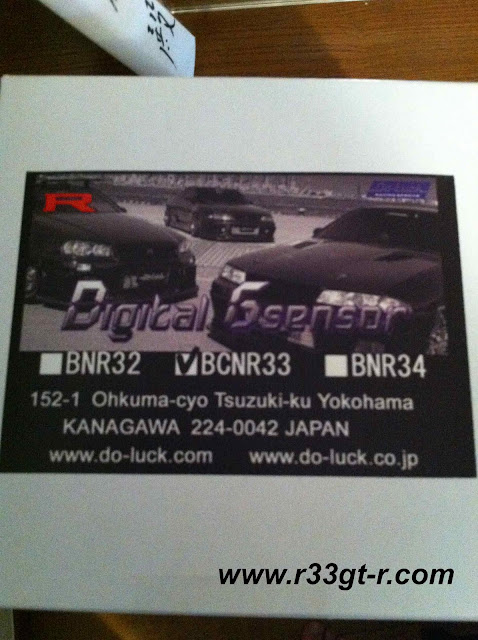 The digital G-sensor for the ATTESSA system from Do-Luck, that replaces the old analog (oil based) one. I mean, if I could get the Do-Luck product NOW but no one seems to know when this new ECU is going to come out - why not? And if it helped me on the track...

Click on this link to go to the Do-Luck website - they have some English describing the theory about how this device works.

Because I was curious about whether a digital g-sensor made such a difference versus an analog one, I actually picked up the phone and called Do-Luck directly. In summary, what I was told was, that in older cars with worn out sensors, this was the cheaper and more reliable replacement alternative, and for the newer R33 and R34 GT-Rs, there was still a difference to be felt.

Orito-san of Do-Luck explained that the units had been tested by several people, both on the street and on the track. Everyone said they could tell the difference, even on the street. Of course the biggest difference was felt in the R32s, as they are older and those initial G-sensors were more primitive.

When I asked about how much of a difference, Orito-san explained it to me this way - the G-sensor feeds a signal to the ECU, and then the ECU tells the ATTESSA pump what to do. So basically they can't do anything downstream of the ECU (that would have to be mechanical), but they are maximizing the speed between the G-sensor and the ECU.

Apparently, with the older analog sensors, people had to be careful not to apply the gas (when sliding) too early. Reports from the track are that, they can get on the gas much quicker now, response is much better in that way. I guess it's like our brain/feet directly activating the ATTESSA pump versus one second time lag that always seems to be there before the pumps activate.
He also mentioned that, compared to the stock system, people said the front torque meter didn't react as wildly - I think this suggests that because the power is getting to the front quicker, the car doesn't need to apply the full 50% to the front wheels?

And the actual result? Well I'm not sure exactly if my full on braking was improved on the Fuji straight before the first corner, but I DID feel the car behave differently than before on two occasions - one at Dunlop corner - (this is when you are forced to slow down to negotiate a low speed hairpin but then immediately get on the gas as you head up towards the main straight) and second when I momentarily lost control, the car reacted immediately to pull me out.

Remove the center console, the gold box is the analog G-sensor. 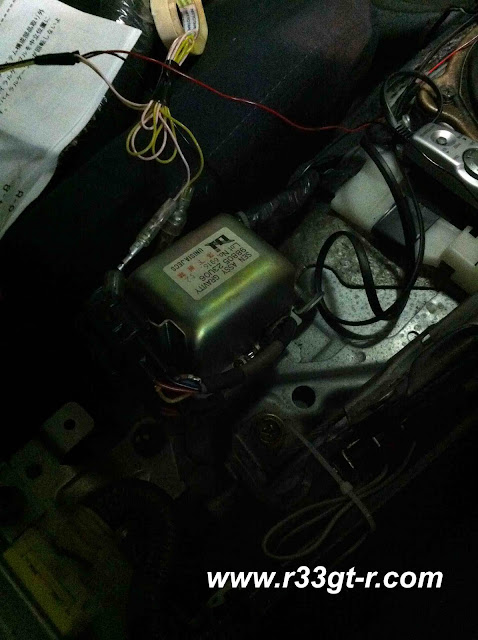 On the R32, apparently you can simply strap the digital sensor on top, but that did not work for me, so I was forced to remove the old G-sensor: 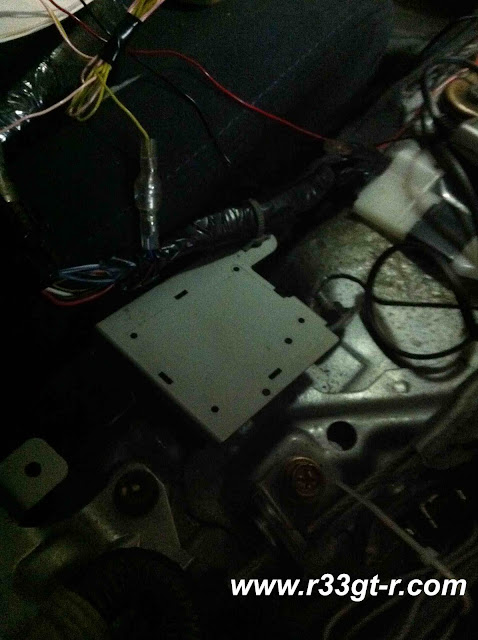 And then just plug in (remove the plugs from the analog sensor), and while they provide some double stick tape, I choose to use a ziptie for good measure. Note that the sensor must be flat, and the arrow pointing towards the front of the car. 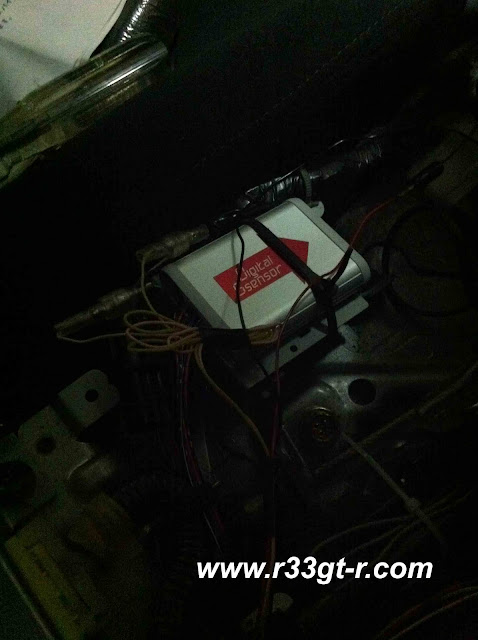 I do hope to have further opportunity to test the G-sensor... maybe I'll do some drag launches next time on the street and see how the car reacts?
Posted by Aki at 11:20 PM

Yes, please do further tests on the road, with a few drag launches thrown-in for good measure. I've been contemplating this upgrade for awhile now.

This sounds pretty good. The OEM sensors are expensive.

A sensor is just a varying output of voltage. In the case of the g-sensor - 8 volts.

Something I will have to try one day.