So I've been hinting at a brake upgrade for awhile.

And finally - here it is, I'll let the pictures do the talking: 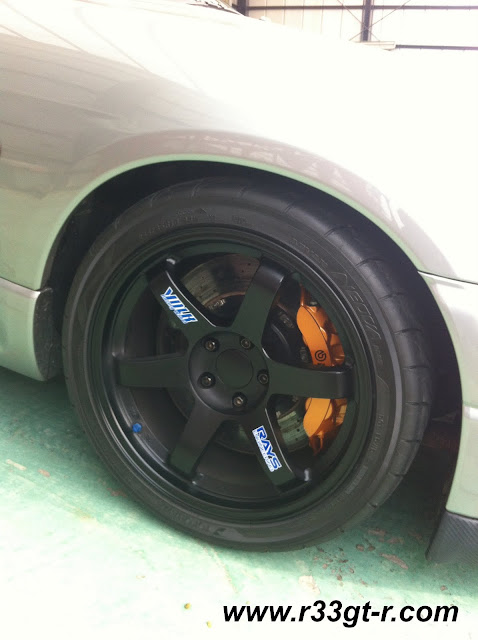 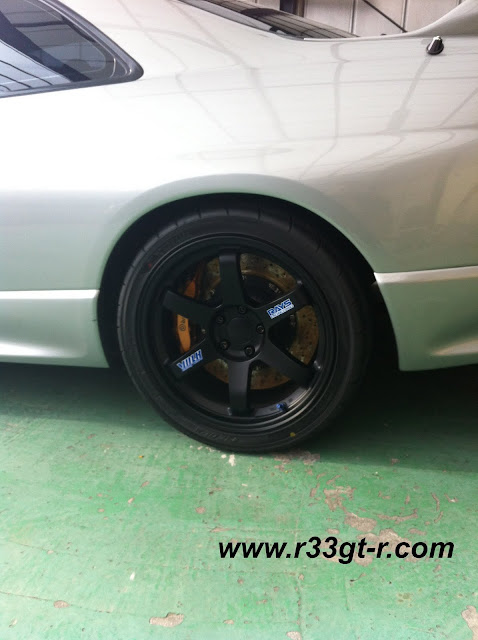 The big problem wasn't finding R35 rotors and calipers - I found those used for decent prices on Yahoo Auctions Japan. It was finding the brackets to make this all work. Actually the front brackets are available here in Japan at EndlessR, but they did not have the rears.

Then, Mine's offered to do the job, but then they backed out - claiming that the rears were too difficult. I found out what they meant by that was, that the inner diameter of the parking brake drum is larger on the R35 vs the R33. Hence some serious modification would be needed - in other words not just a bolt on affair.

I then found a tuner in the UK offering the bracket set, so I ordered from them. Thanks to the world's first R33 GT-R with R35 brakes - he is on the GTROC forum and had this tuner do the work - this tuner was able to offer the brackets for a reasonable price. Unfortunately, for whatever reason, getting the parts to me took about 4 months... and yes required some welding. Specifically, they supplied some steel rings to fit into the rear hubs - to match the R33 parking brake. So the search was on for someone in Japan who was able and willing to do this work.

Enter BE AMBITIOUS and Ninomiya-san, the shop owner.
Here is a link to his shop - http://homepage2.nifty.com/beambitious/ 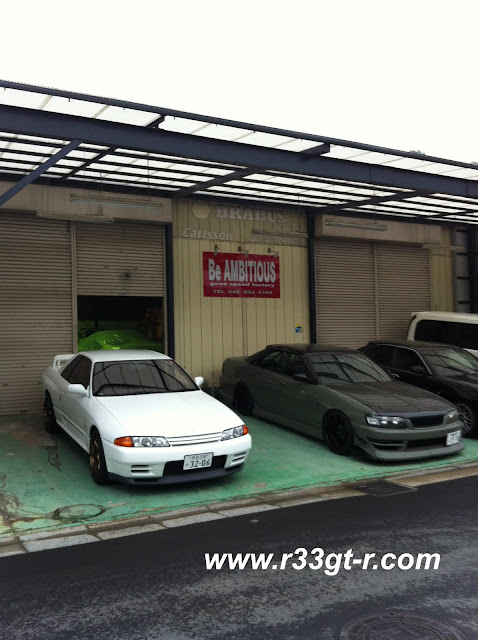 My friend Alex introduced me to Ninomiya-san. Turns out the guy is a bona fide ex Nismo race team mechanic, as well as having been on a few other notable race teams in and outside of Japan, including a LeMans team. He's also well known in the GT-R world, having been featured in GT-R Magazine, as well as knowing and having worked with some people that I know (like Sunako-san).

Anyway, the UK tuner sent me this: 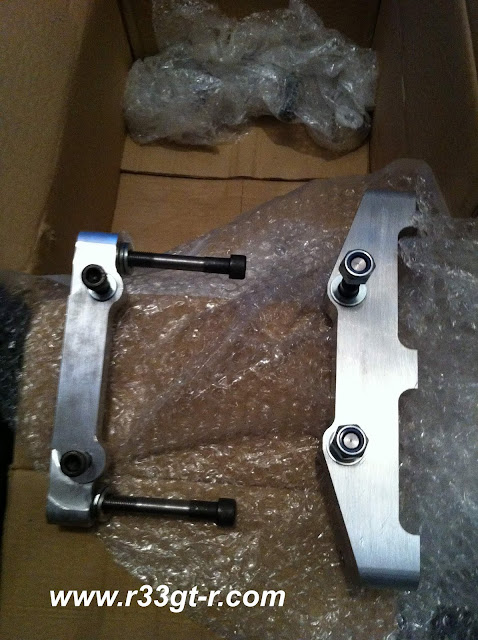 High quality aluminum I'm sure, but not exactly weatherproofed. So when I presented all to Ninomiya-san: 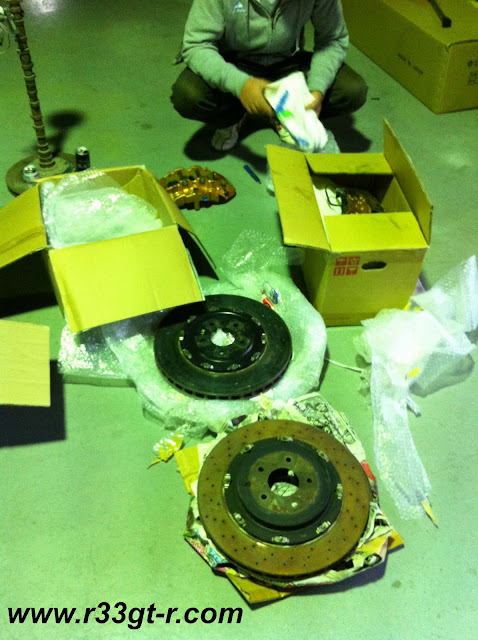 (his interior lighting produces this weird hue...)
First order of business was to get the brackets anodized (to protect against the elements!) 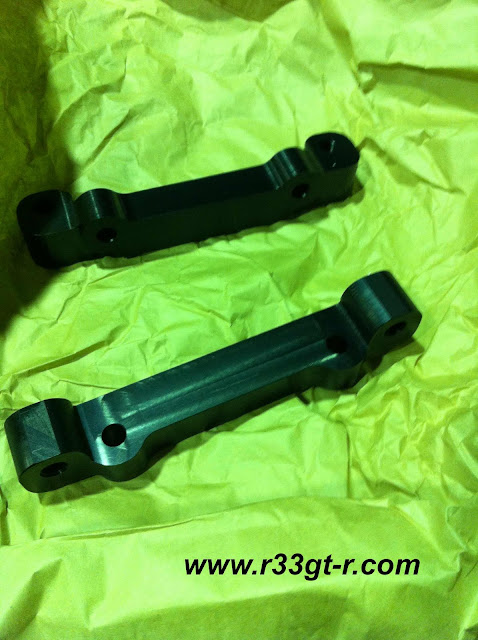 And then it was just a matter of bolting it all on, right?

Well, not quite. First, Ninomiya-san had to order some stainless steel brake lines, which he then had to modify to fit properly. OK, sounds reasonable.

What I found out today when I picked up the car though, however, was that the brackets were not as quality as they were made out to be. Solid, yes, but the dimensions were off a bit, so he had to do some work on the hubs in order to get everything to fit. He also had to insert some bolts the opposite way to clear, etc. What he couldn't fix was, he wanted an additional 1mm gap on the inward side between the rotor and the caliper, but the bracket dimensions couldn't be adjusted for that. (they could for the other side though).

Anyway, what's important is that thanks to Ninomiya-san and his ability to think outside the box, he somehow got it all working.

And working it DID! First I was surprised to learn that the pads that I bought with calipers, had barely been used. So I now have to break them in. Second, I was told that - and I need to check if this is true but no doubt - the R35 Brembo caliper pistons are Titanium? As well as vented - and so I was told no need to get those titanium inserts (I may do so anyway), as the design of these calipers has already taken into account methods to prevent heat transfer from braking.

Third - on the road - wow. The stability it incredible. Unfortunately Sunday traffic meant I really couldn't go too fast, but a blast up to 130kph, then down to about 40 to take an off ramp - I didn't even feel the car's nose tip down as it usually does. The pads themselves do not have the same level of initial "bite" that my PFCs did, so we will have to see how well they do during a track day. But with the larger rotor in the rear doing more work, meant that even with my relatively soft suspension the car was super stable during braking. I suppose I'll have to see if it ever reaches the level where I feel my race harness digging into me.

I asked Ninomiya-san why current thinking on brakes was more even size ratios, versus what I was told a few years ago by Tamura-san at Nissan (he was involved in the R34 GT-R development) - that 355mm/322mm was ideal. Apparently these Skylines have no problems running larger rotors in the back. Even Nissan knew this, which is why for later R34s the P-valve (proportion) in the brake master cylinders gave more bias to the rears (r33 was about 30% rear, later r34s are about 40% to rear). Also Nissan outfitted those later R34s with larger rear rotors as well. I am guessing that cost, and being conservative is why they didn't push the limits on the rears brakes.

Anyway - as I get used to these brakes and how they work out, will report back on how it all works out. For now, just being the only R33 GT-R in Japan with R35 GT-R brakes (I think) is cool enough!

Also - in case you are wondering - yes, these rims are the ones that were fitted to Dino's car during the Tomei photo shoot. These rims are actually his, I had them painted and we agreed I would use them for now as I need them to house the R35 brakes... unfortunately my 18 inch RE30s don't clear the R35 brakes, so will have to use these 18 inch TE37s for now...
Posted by Aki at 12:58 AM

Fabulous piece of work this! However even though I have been looking to somewhat improve my brakes, I don't think I will be following your path and will go for something a little more off the shelf.

Believe me, that is probably the smart thing to do... unless you find some perfectly done brackets and cheap R35 brakes, there are better alternatives out there, especially if you are buying used parts.

Love your blog and car! I may steal some ideas from you!

awwww im so jealous right now. I remember when we were talking on gtroc.uk about brakes i think the 35 ones were brought up. Does the car feel heavier with them if so any plans on changing to alloy rotor hats in the future?

Also, any way i can send you a picture of another car to see if you've seen it down there? Saw it on the parakko blog page but havent gotten any response from him. thanks, matt

Matt - yeah that was awhile ago, right? The car DOES feel heavier - but only slightly. I was worried that with the increase in unsprung weight, (ie below the springs) the car would act funny, but actually the reverse is true - versus just having the TE37s on and standard brakes, when the car felt "lively" - now the car feels more "stable" and "stuck to the road" - but at the same time turn ins are much better, the car feels more "eager" for some reason... PM me on the forum and I'll send you my email. Thanks.

Hello aki, I just recently stumbbled apon your blog and I have to see its amazing I love whst u have done to the 33 im a huge r33 fan not sure why its so un popular but I perfer it over the 32 and 34 anyway I was wondering if I could ask you a few questions. My email is adidas1621@hotmail.com thanks alot :)

Hey Aki, admire what you've done to your BCNR33, just a question the TE37s that u ran before with the R35 brakes, what's the size n offset?

Thanks Adam for message! Size and offset of these wheels are 18x9.5+12

If you move up to 10.5, that means half an inch - that is, 1.75cm wider on each side of the hub, but +15 means 3 cm close in towards the chassis? I would use an online wheel calculator to double check that the internal dimensions have not changed that much...

What wheels do you currently have on your BNR34? Glad to see you agree that these brakes work well for you too!