Some Minor Clean Up

The other day when posting about the work I had done at Nismo Omori Factory,  when I wrote about the new door latch (green arrow), I noticed that the residue from an old oil change reminder sticker was ugly.  And to be honest, not sure why I never removed it before!

Of course, the existence of such sticker residue causes me angst, and so I immediately ordered a product which apparently is made just for sticker removal - in the past I had used whatever I had lying around to remove stickers - brake cleaner, rubbing alcohol, Simple Green, you name it - but this time I wanted easy street. 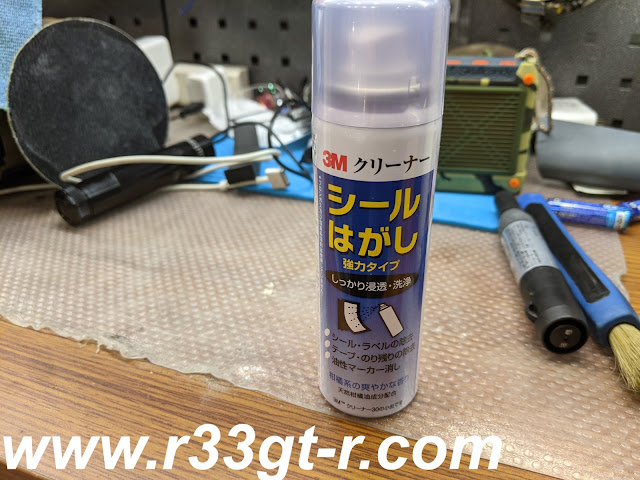 So here are the two former stickers that I was not successful at removal - can't remember what I used to try  to remove them: 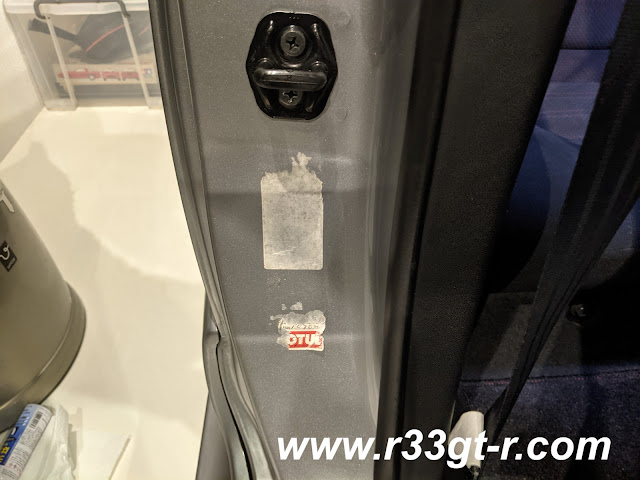 So I just sprayed on the 3M stuff, and let it sit for a few minutes... 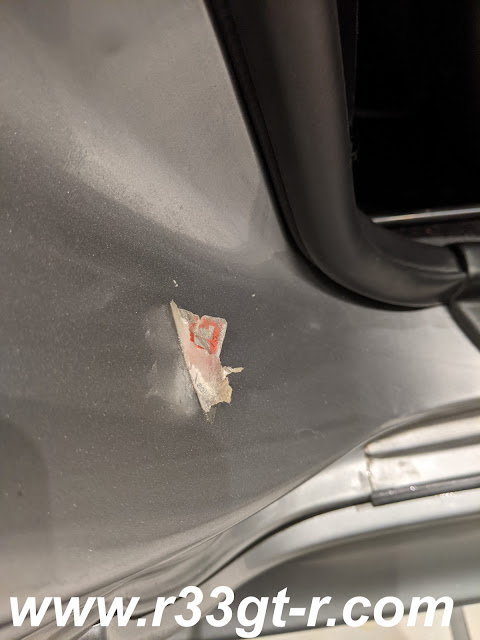 Talk about effortless - a super thin crispy sticker - oh and it smelled good too! Like lemon... 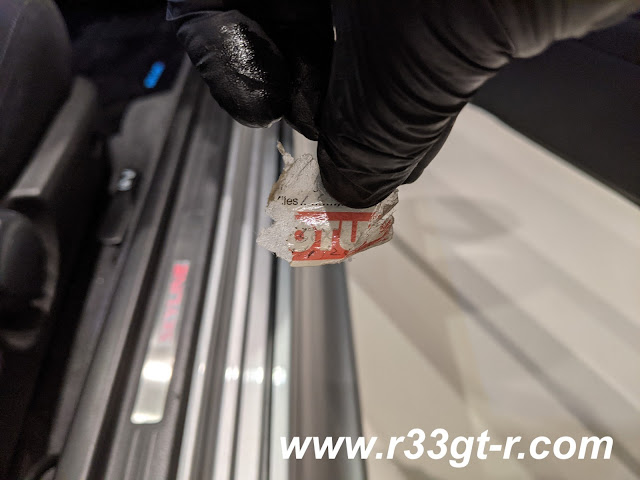 Ta da! Super clean, just the way I like it!

But sure I am not going to devote a whole post to this. No. In fact, I had long been annoyed by another small detail: 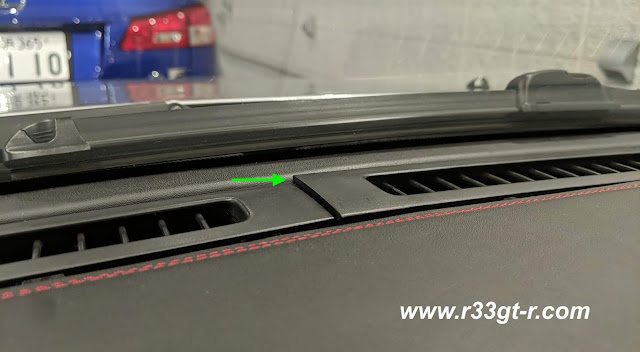 While I would love to blame this on 90s Nissan quality, unfortunately this came about because of this:
So long time readers will know that when I embarked on my leather dash project, I purchased a 33 dash sight unseen from a friend in the UK, who then sent it over to Cesar, the master craftsman in Mexico who did the leather work (check out this video he made to memorialize his work!). This repaired tab was either in the dash at purchase, or maybe Cesar had fixed up in an attempt to make the vent fit into the leather covered dash. In any case, every time I saw how the driver's side vent was not completely flat, it distressed me, and no amount of pushing down seemed to fix it for long.
So while I tried to use a file to sand the tab down to the level of the others, it just wasn't working. So, I quickly found and bought on Yahoo Auctions a replacement set, since these vents are no longer available new: 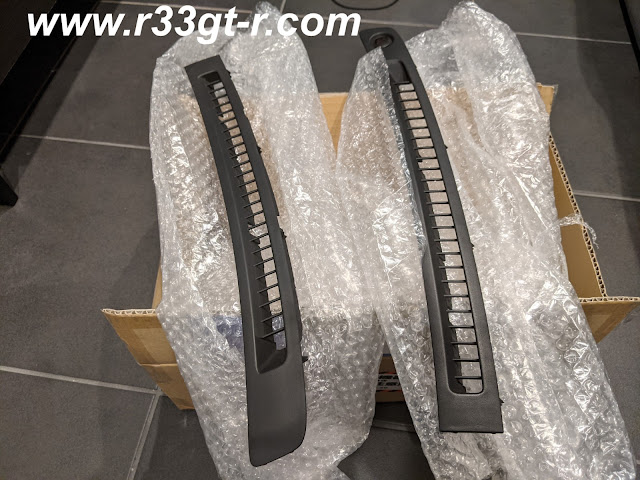 These look to be in great shape, and of course I made sure the tab in question was intact. 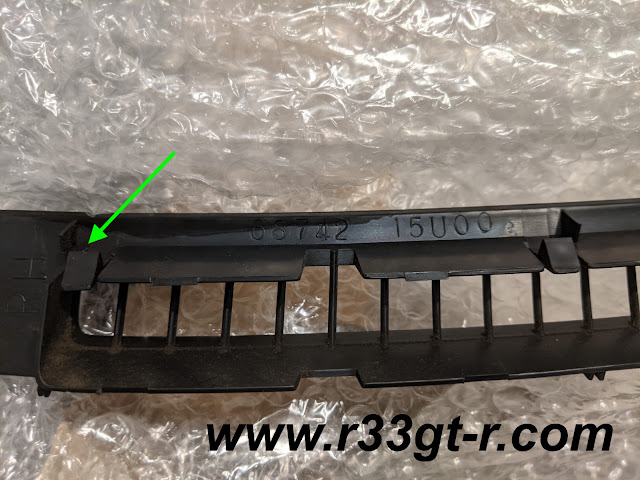 Not knowing what kind of car they had been in previously, I decided to wash the replacement right side vent. 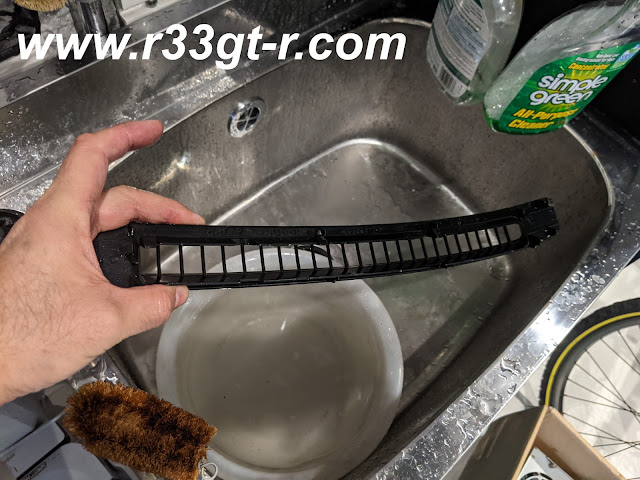 And of course use some cotton swabs to clean the dust and dirt that had accumulated in the corners. 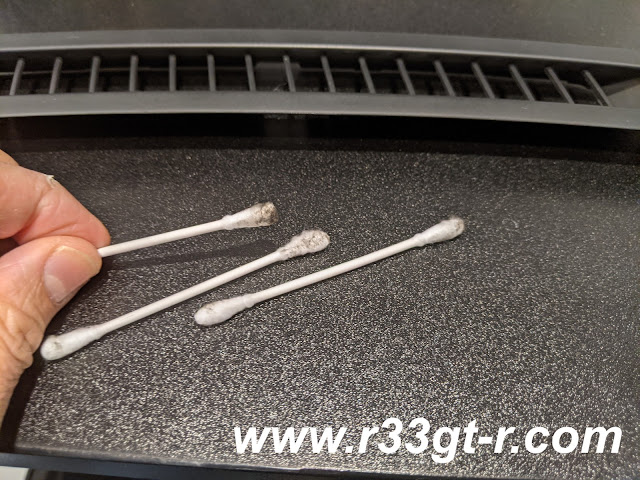 Upon replacement, I found:
I quickly figured out why, however. Take a look at the left side vent that I removed from my car (top) compared to the one I got on Yahoo Auctions (bottom):So I decided to see which fit better. I removed the original left side vent (being very careful around the sunlight sensor) and then washed it and the replacement vent, including the use of the cotton swabs.
That is when I discovered, that the replacement vent had a slight scratch: 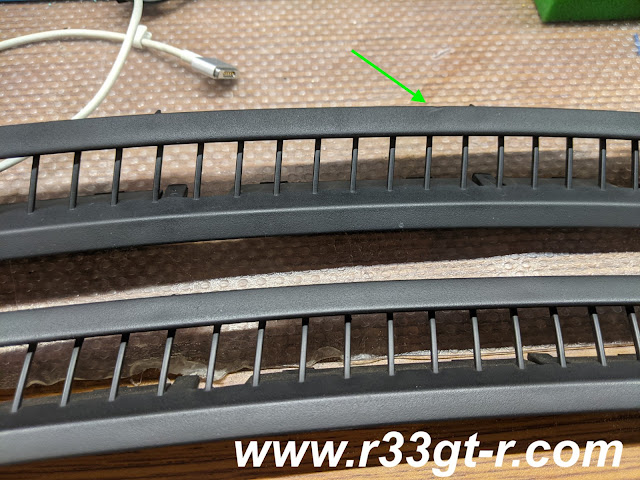 Which meant that, even though color-wise and fit looked like this: 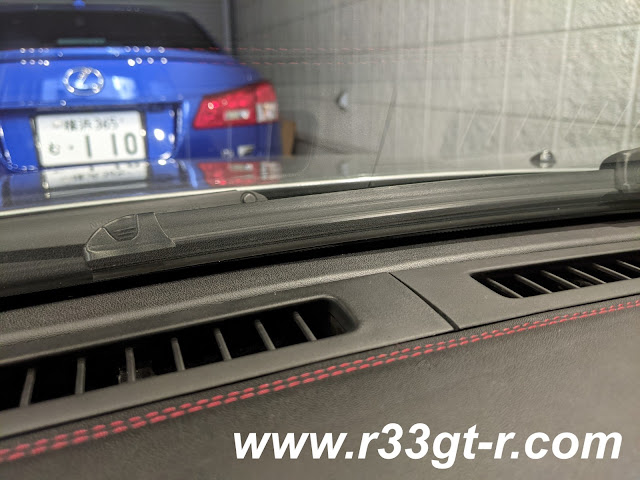 Using my original vent looks like this, even though it appears to my eye that there is a slight color variation (and admittedly I had to push down hard on the replacement vent to make it flat): 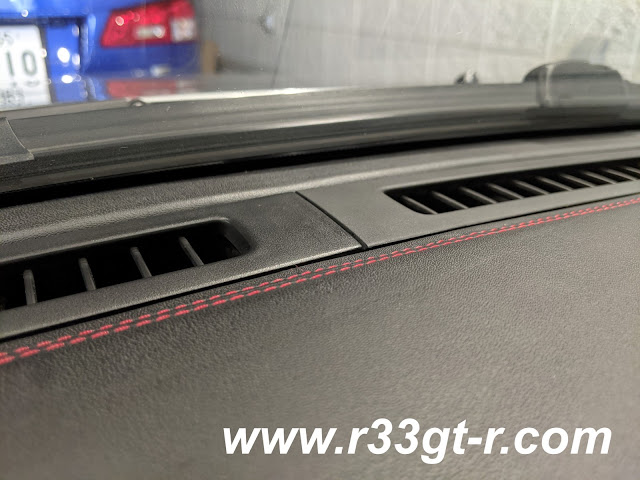 So what would you do? Well for now I have decided to try to see if I can find another pair on Yahoo Auction that not only is structurally perfect, but also the same consistent color. Or, maybe I will get someone to carbonize these vents to match the other carbon upgrades in the interior. I found it easy enough to pull these out so replacement will be easy whenever it happens. Meanwhile I will continue to use the vents I found on Yahoo Auctions, because the fit is better, even with that small scratch.
What I DID replace was the sunlight sensor, which I got from Trust Kikaku - see my last super short post! On both passenger side vents, the part seemed to be very very original - the paper sticker is faded yellow! 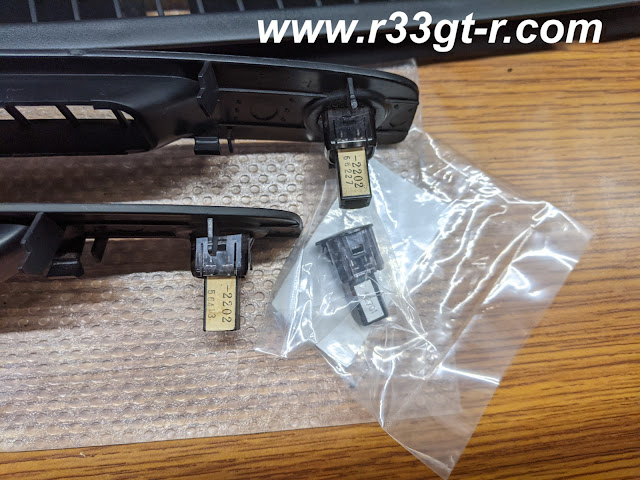 So I decided it would't hurt to buy a new sensor, before it becomes unavailable or out of stock so many other OEM parts seem to be doing these days.  Hence my previous post.  Although, the only thing it would affect would be the HVAC system, I think. Not sure I'd be able to tell the difference either.
Install was easy - there are clips on the side of the sensor, and you just push up and out.
Look at the difference? Even if the sensor is still working perfectly, the darkened clear plastic might be affecting its accuracy? 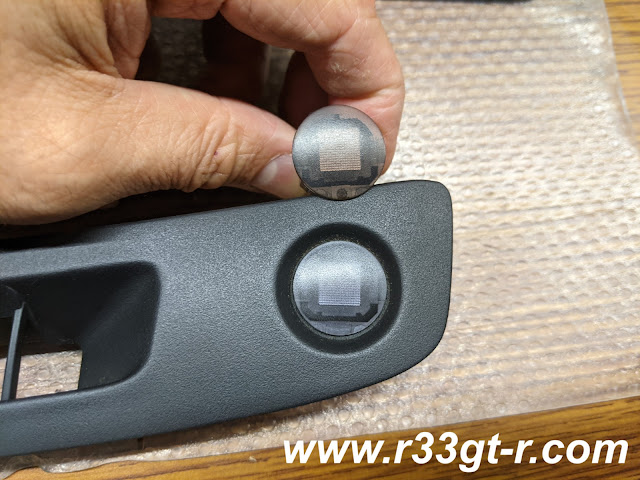 Have you seen this video? At the end Tsuchiya somehow goes into a rant about the R33 but Niikura-san mentions that the R33 he worked on with Nissan Prince Chiba ended up being surprisingly fast. I have a hard time really squaring what Tsuchiya says about the R33 being too big and the R32 being just right, but that's probably because I've been driving the car on US roads where the dimensions of the R33 are right around a new Civic Type R or WRX, all of which seem small compared to the ever-present F150/Silverado/Ram 1500 trucks that are everywhere or even the size of modern Camry/Accord/E-class/5ers. I seem to recall the R33 feeling a bit claustrophobic on Japanese roads when I rented one a few years back, but it's hard to say how much of that was my nervousness about driving on Japanese roads for the first time.

Well, it is well known he never forgave Nissan for his humiliation when he took his own 33 around the track and the 33 press car was faster as it wasn't exactly stock. It's not a big secret that the 34 press car wasn't exactly stock either... he can talk all the smack he wants, but the truth is that the low sales numbers but still affordable now means that the 33 will carve out its own legacy. Perhaps it will one day be considered the best overall - all the mechanical improvements, proper race pedigree but not outrageously priced on the used car market, and subjectively the looks that have aged the best. We shall see...

Thanks for your comment! Agree that back in the USA, this is not a large car at all...

what is the sunlight sensor used for?

I don't know for sure. I assume it's used along with the inside temp sensor in the dash and the external ambient temp sensor get a more accurate reading and help the HVAC unit operate as efficiently as possible.