Research - Where Do All Those Engine Stickers Go?

So normally I don't post until I have done the research in full and I am ready to show everyone something, but in this case I'll make an exception to show how I get an idea and then start moving towards SOME KIND of project.

In this case, I am talking about all those stickers that were on the underside of the hood (bonnet) and in the engine bay when the car was delivered new.  Anyone ever wonder what those were all about? Some of you may have faded remnants of some stickers - but didn't you ever wonder if your car had the full set of stickers as applied at the factory?  And what do some of those stickers say anyway?  And then some of you are like me - you've replaced either the hood itself or the underhood insulation, or both, and want to get "back to OEM" or as close as possible, anyway.

The genesis of this project is when I got the underhood insulation replaced at Nissan Prince Tokyo back in 2016 - so yes, I have been thinking about this for almost 5 years, but have done little except to slowly collect the stickers when I remembered.  As you can see, there is an indent on the insulation which clearly suggests one or more stickers of some sort are supposed to go there. 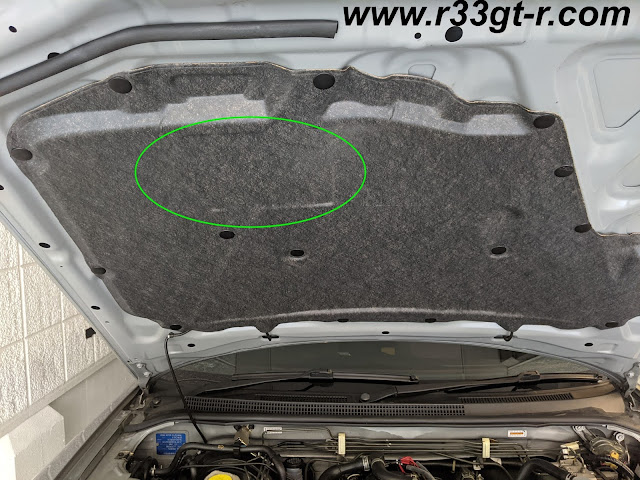 That, and when I googled I found this:

Other search results showed a sticker not on the insulated part, but on the right side directly on the paint:

As well as just one sticker on the insulation:

So, since all of them can't be correct, I had to look it up. My main source was this - Nissan's Main Maintenance Parts Catalog for the R33 Skyline, issued in July 1997, covering vehicles made since 1993: 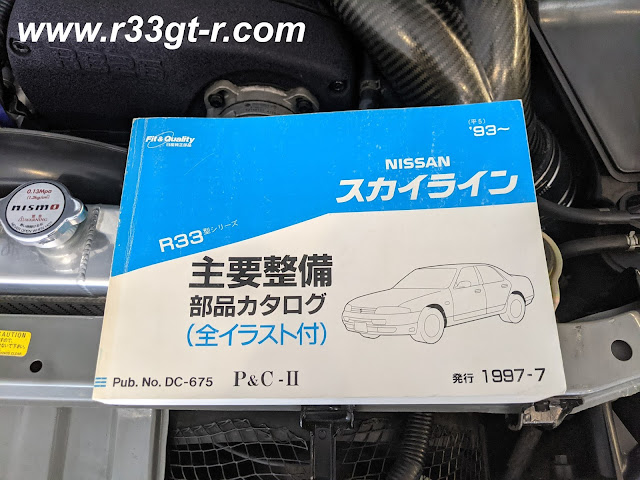 Yes, it is basically the print version of the Nissan FAST. Of course, as some numbers have changed due to the Nismo Heritage Program, I also accessed the Heritage Program as well.

Finally, I also used nissan.epc-data.com, and found this (the same as above, but a bit easier to see the locations under the hood for C, A, and G?):

Anyway - so here are all the stickers I have accumulated over the years. 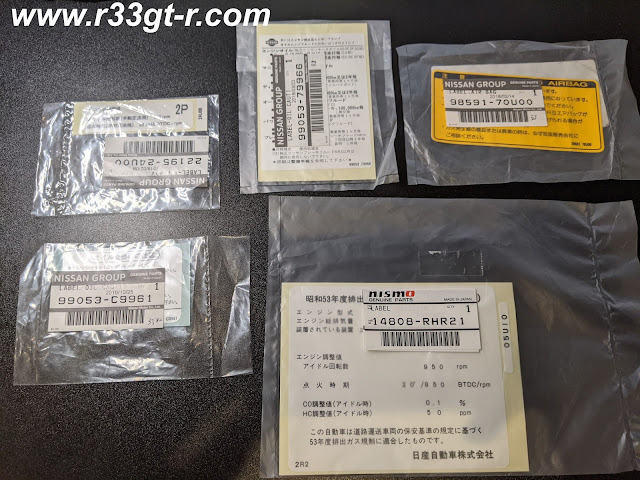 Let's look at these one by one. First, this very yellow SRS Airbag warning sticker ("G" in the diagram above).  I have confirmed this is the correct parts number for the 33.

The next sticker is for emissions.  Note that this one is available only via the Nismo Heritage Parts program.  The sticker for the BNR32, by the way, is identical as the same regulations were in effect and applicable. The difference is in the parts number (ending in RHR20) and the print on the bottom left says "2R1" and the separate small sticker on the side has "05U00." Yeah, I have no idea either.

Next is a more comprehensive fluids check list ("C" above). I have confirmed this parts number is for the 33, although I think this is a period correct sticker for all Nissan vehicles of the era.

Next, I found this Oil Change Warning sticker. I have confirmed that this parts number is for the Series 3 R33:

The only problem is, I have no idea where this goes on my car. Not only was the parts manual not helpful, I could not seem to find out even on Google examples of this sticker and its application.  And yet, it is listed on FAST and in the catalogs as for the R33...

This next sticker (weirdly, also listed as "C" above!) is listed as common for the R33 and R34 - the Ignition timing:

I have no idea what the "2P" here is for, nor why there is a small sticker on the side with the second half of the parts number.  Turns out however that maybe I did not need to order this sticker:

So for the remaining 3 stickers, this is how I THINK they would be applied, according to EPC/the parts book - but to be honest, I am not sure if I even WILL have the stickers applied: 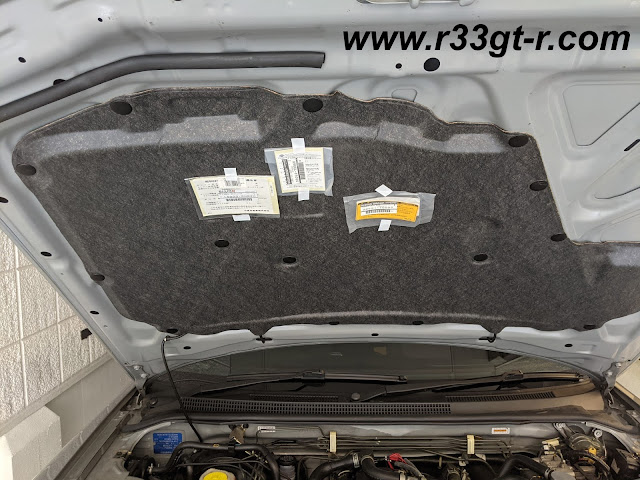 I guess this will simply have to be another question/task for Nismo Omori Factory, next time I go there...

Actually, there was ONE sticker I found and I know where it goes: 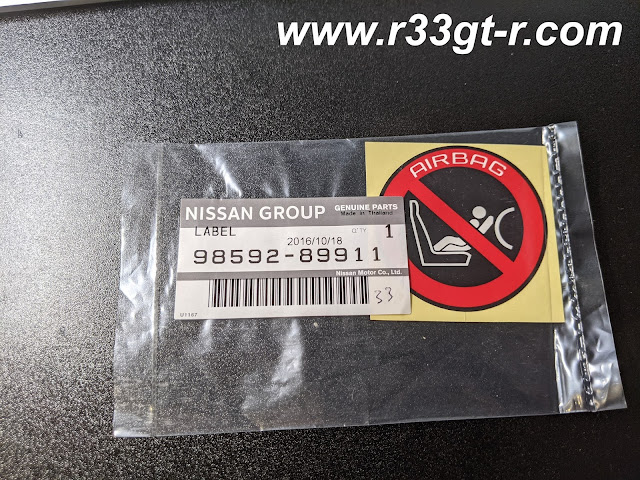 On the side of the dashboard on the passenger side - visible when the door is open. Although whether to apply over that nice leather finish will be another conundrum.

Anyway, most frustrating for me because there simply isn't enough information I was able to find. Not the most pressing parts update for my car, but I did want to share what kind of research I do as well as my decision making in seeking to refine my car even further.

So, I suppose I will have to continue my research before moving forward on actually applying these stickers.

Did you have any weird stickers left by previous owners? I had an itasha-guild.com sticker hidden on the driver side door jamb... very mysterious.

woah the level of detail for your restoration is unreal! respect!

Weird stickers? Not that I can find... then again I've owned this car since 2005. I do remember cleaning out a lot of stuff... lol so the itasha have their guild? Hilarious!

And thanks for that! But why not get it perfect when you can?

You want to know where the sticker "Warning of Time to Oil change...." belongs?
I can help you out!
I have this sticker it is placed in the triangle under the Hood that is direct above the Airbox, at the top when Hood is open.
I can send you a picture when you email me!
And thanks for all the Sticker Numbers, it looks a lot better with new ones !

Hi there. LOVE what you are posting and this website. I have an R33 and about as much OCD on the car and it's cleanliness as you do. Do you have a blog on the door jam stickers and any other location I should pay attention to? Also, any suggestion on where to purchase these stickers?

Kai - thanks - sure what is your email please? Or you can send to me at aitoh at hotmail.com

Jake - thank you for the comments, good to know there are others with OCD and love a clean car! No blog post on the door stickers, but the Nissan FAST - you can find several versions online, notably from companies that sell Nissan parts - have them all listed out. Your car may have originally come with the exta fine hard coating glass, in which case there would be an EFHC sticker on the rear glass somewhere. Any sticker on the windshield is likely one required for registration, as usually stickers are not allowed on the front. Otherwise, if you have a weird one email it to me at the address above! Purchase - Trust Kikaku is a good place to start, as they have native English speakers!