It's Always the Details that Count!

In my last post, I showed you how I changed out the ceiling lights - both front and middle - to OEM S15 pieces which came in black, versus the light grey for the R33 parts, in order to match the new Alcantara headliner I had first modified at Robson Leather and then installed at Nismo Omori Factory back in July of last year as part of a lot of extra work I had them take care of.

However, there was one small detail that had been bothering me ever since I got the headliner installed, which I had actually forgotten about, but then in the course of swapping out the lights this little problem made itself apparent, which forced me to find and then have this sent to me. 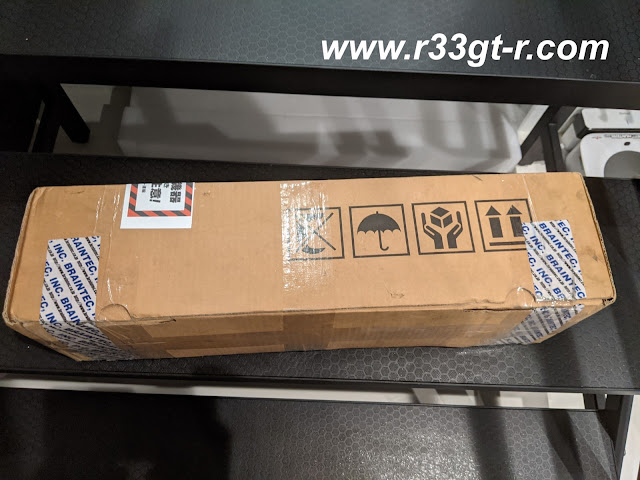 What is it? Well, take a close look. Yep, another pair of S15 sunvisors. And in this case, the only difference being the printed lettering on the warning label:
Can you tell that the ones installed in the car already (top) have smeared lettering? At the time I found them on Yahoo Auctions, they were the cleanest sample I could find. Luckily this time around, I found an even CLEANER pair.  You can see clearly how bad it was in this next photo, after I removed it and lined it up with the one I had newly bought.
The one on the passenger side, however, did not require replacement as it was super clean to begin with:
The better condition driver's side visor wasn't perfect: 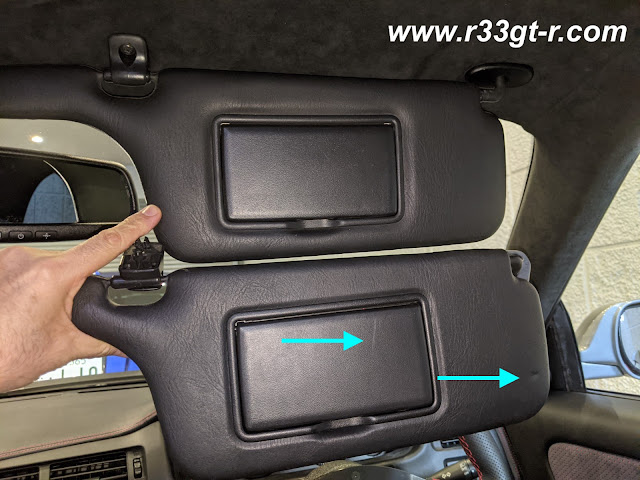 Can you see how there seems to be a scratch on the mirror cover, as well as a small indent on the right as indicated by the arrows? Nothing I can't polish out and also apply a heat gun to (which is what I did to eliminate the indent).
The bigger problem was, as I indicated above, the mounts on both of these were different. Here is what the one one on the newly purchased ones looked like: 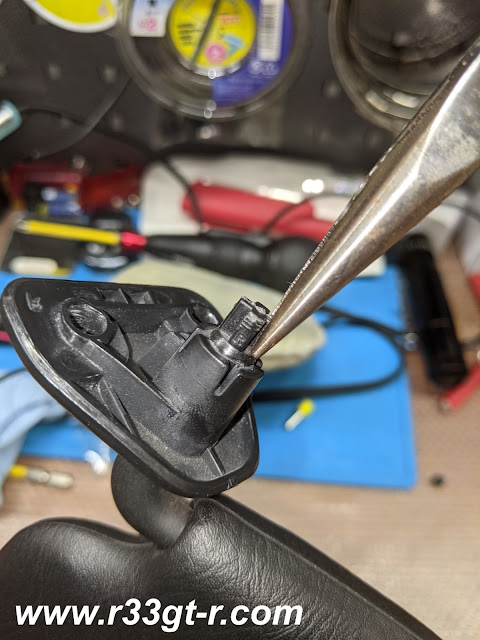 And as you can see here, the ones on the Nismo installed ones looked like this. 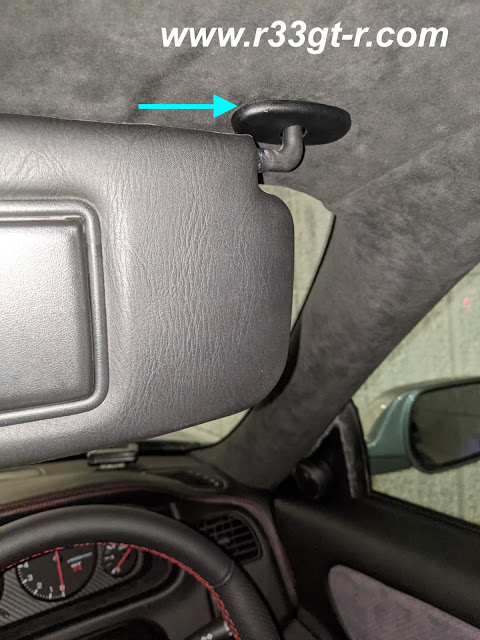 Took a bit of heat and some muscle, but finally loosened the teeth on wider mounts: 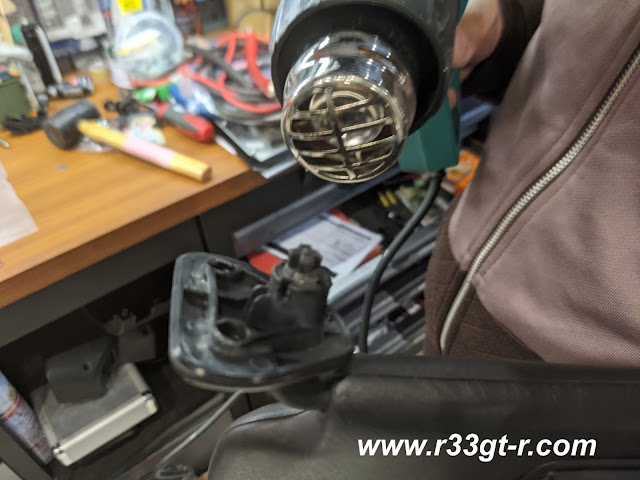 Then all I had to do was to undo the cover, held in place by two small indents on each side (as shown by the blue arrows): 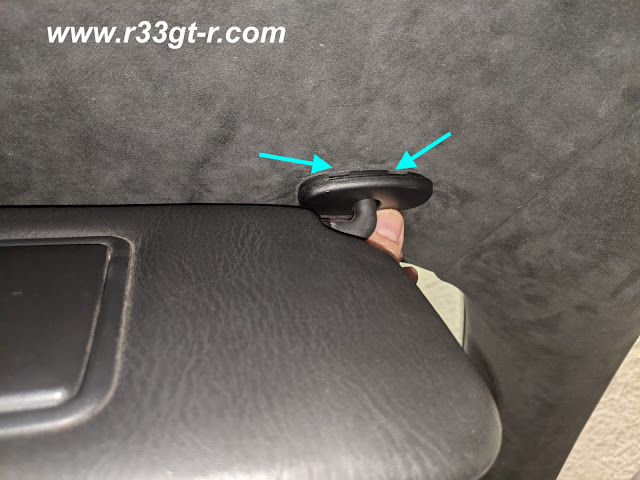 Which then revealed two screws: 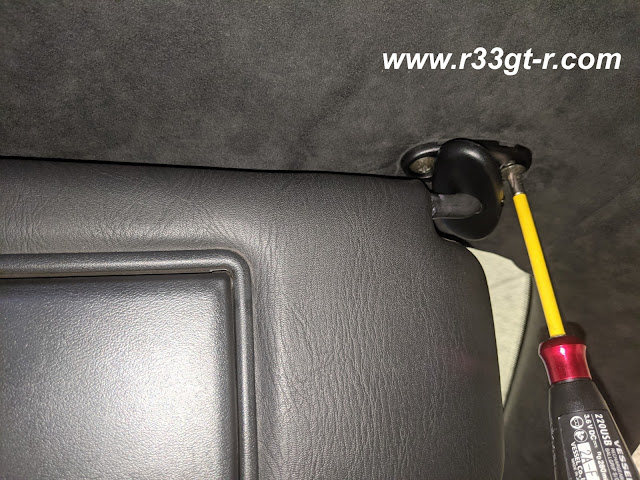 And then the sunvisor simply came off and left this hole: 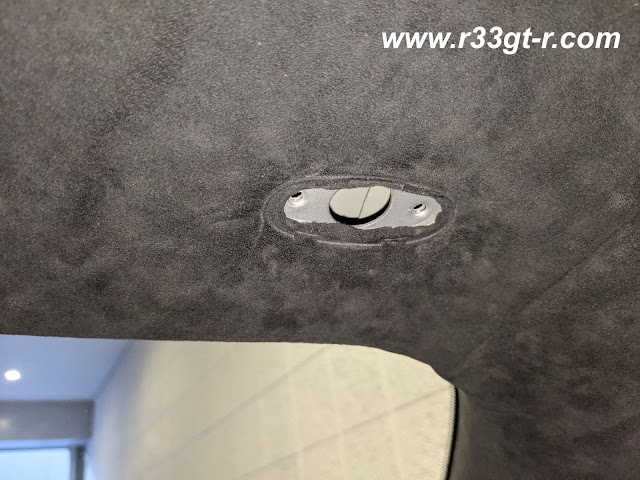 The final step was to swap out the mounts, and then reinstall the cleaner sunvisor. Hard to tell how good it looks as I took the next two photos at night, under artificial light, but I think you get the idea! 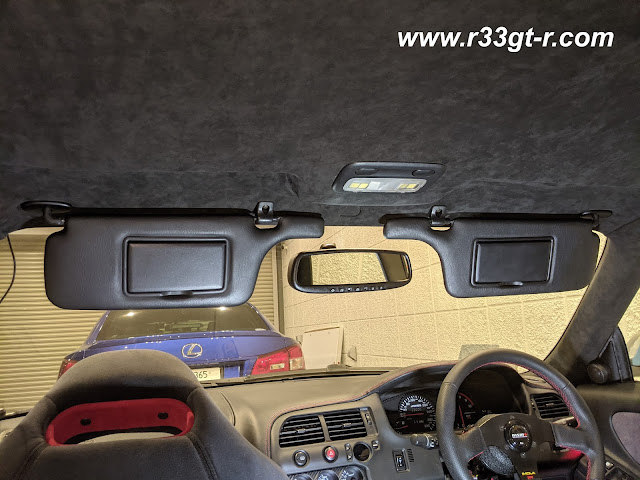 So again yes small details like this really add to making the car even more perfect! Ok nothing is perfect, but if a small issue can be fixed, then why not fix it? Maybe this year is where I do nothing major but just keep making small upgrades like this? Then again, we are already done with 2 months of 2021, better save up some more soon for some interesting projects in the back of my mind...

Those little interior details are always tough, glad you could get the sun visors 100%. I've managed to fix the R33 misfire, somehow changing the spark plugs was enough to get it to go away. That and another used OEM coilpack. Once I get a set of new coilpacks I will replace that and the ignitor and just keep the old ones as spares. One thing I noticed looking at the data logs was that the AAC valve was always targeting a very low duty cycle like 2%, hot idle seems to be a little high as well at about ~1000-1050 rpm. Do you think it's worth getting the car smoke tested?

Unfortunately I had to replace the turbos sooner than planned, so it's currently on the stock ECU with HKS GTIII-SS turbos. I have the boost solenoid unplugged to run wastegate boost, fingers crossed I can do a test run soon with a friend so they can monitor the TP load index and boost gauge so I can back off if I'm hitting dangerous levels. Once I get it properly registered I can put a Haltech in it and start tuning things properly.

Sounds like it's going to get exciting soon! If you are concerned, yes I would have it checked out. Peace of mind may not be cheap but you don't want to take any chances these days - as parts continue to become scarce...good luck!

Have you found proper hook/clips for the visors? I just install the S15 visors in my 33 and noticed I had to install the hooks/clips in reverse.

Not sure which clips you are referring to. The inboard ones? Those came with the S15 visors I ordered...