So taking a break from the Interior Modernization project - I have to publish my Speedhunters article first before continuing here - sorry everyone but thanks for understanding.  As a preview however, I will mention that, the Speedhunters  article will be about my visit to pick up my car from Worx Autoalarm after the leather dashboard had been installed, along with some optional extras! And my excuse for the delay is that I was waiting for Dino, who had come along with me, to share the photos he had taken because frankly, I am barely competent with a camera.

Anyway -  I was lucky enough to be offered a Guest Pass (and an A Paddock Parking pass - right up with the race drivers and Nissan execs) to attend this year's NISMO Festival which took place last Sunday, so naturally I decided to go.  While I took a lot of photos, what I'm posting here of course relate mainly to the Skyline R33.  Dino was there in his professional capacity (check out his Speedhunters article here for a more comprehensive look at the Festival), and my friend Alessandro, who owns but really doesn't drive his 34 GT-R, was also there and posted his impressions and some good photos on his blog.

Because there are so many photos, I've split this post into two parts, in chronological order following my day - Part 1 will be arrival until lunch, and then Part 2 from after lunch until the end. Which, if you read Dino's article, you know it took us 6 hours after leaving to get home...

Anyway we started the day early - I woke up at 0500 and picked up Dino, figuring he'd have a few tricks to share - I don't like crowds and I don't like traffic, so I was hoping by traveling with him I could avoid those. I also figured he could make some key introductions for future GT-R projects.
We arrived at Fuji Speedway at 0720, and were waived through by the security guards. We then made our way up to the parking lot closest to the main Pit Building (Pit Building A) and promptly parked in the front row. As I was parking, we saw pro racers Motoyama, Hoshino, Krumm, Matsuda, Quintarelli, and others all arrive in their personal cars.  All Nissans of course, with Krumm in his R35. Obviously, I was parking with the greats...

As we then made our way to the main pit area, we ran across many of the vendors setting up for the day - at Nismo Festival famous and not so famous vendors set up their wares, usually selling items at fairly hefty discounts.  Some of the items include cars! Dino and I killed some time chatting with Nakayama-san at Mine's, as well as a few other people at these shops.

We started peeking into the various pits in the Pit Building and the drooling started...
The gates opened to the public at 0800, so about 10 minutes before then we headed upstairs in the main pit building, where all of the conference and meeting rooms are located.
So Dino and I went our separate ways.
I found my way to the Guest Room and walked in, unsure what to expect.  After checking my ID and signing in, I was lead to a very nice table.
Trackside seats!
Just as I started sipping my coffee, I realized there was some activity on the track.  The first cars had starting warming up on the track.

After enjoying a few biscuits with my coffee, I heard a commotion outside on the parking lot side, so went to take a look.


Oh right. It's 0800. That means gates are open to the public, and those who have been waiting patiently (even some from the day before!) are now rushing in to try to grab bargains from the vendors! 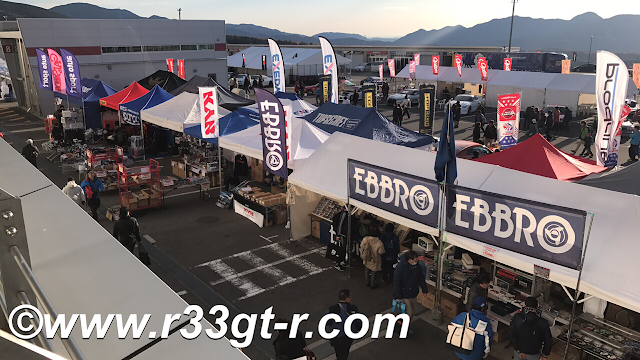 It was just about then that Dino texted me that he was on the move; so we headed downstairs to check out the action.


Somehow Dino convinced me to hang outside the pits trackside - Bonus points for anyone who can spot me in his Speedhunters article photos.
Dino kept making his way down the pit but we then turned around and wandered outside, first stopping by the GT-R Magazine booth.
And then I spotted something to make any boy happy. 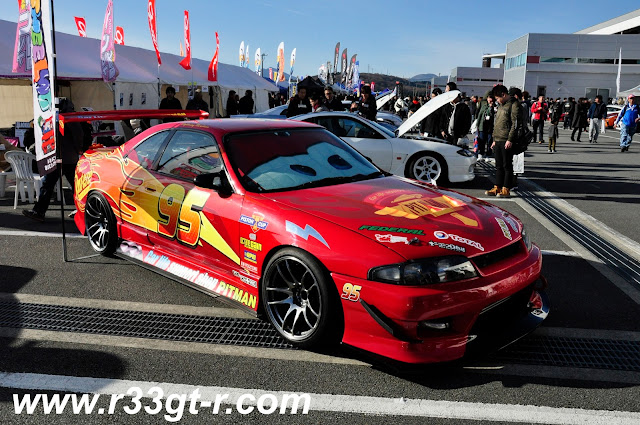 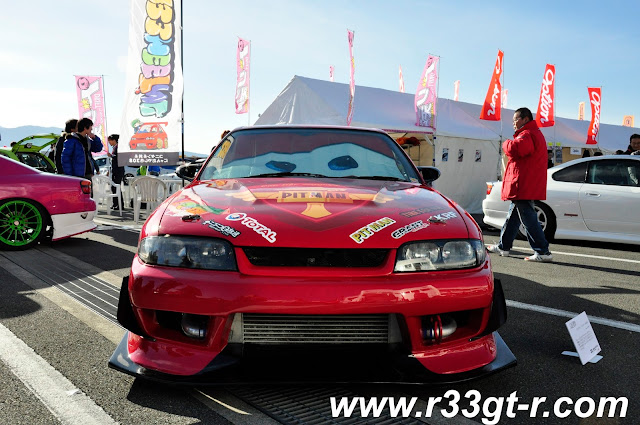 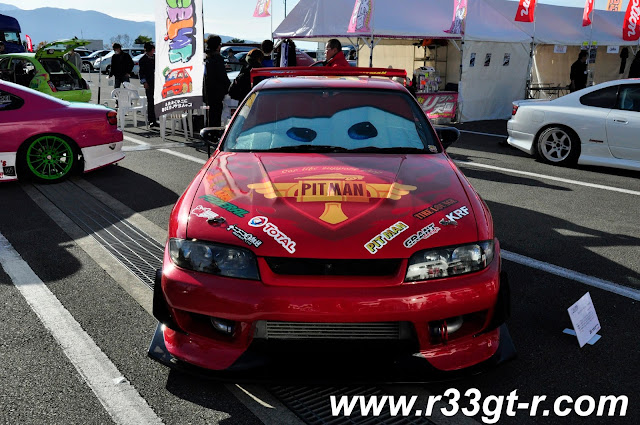 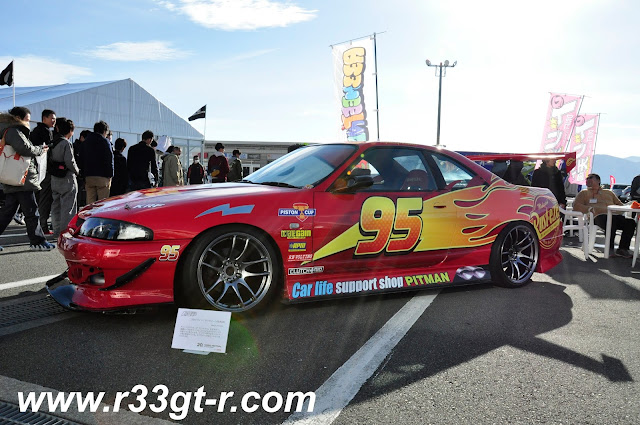 I think it was about this time Alessandro met up with us, having patiently waited outside with the other paying ticket folks. Because I wanted to check out the 33 machines, we headed back to the pits and found them being checked before their track runs later in the day. 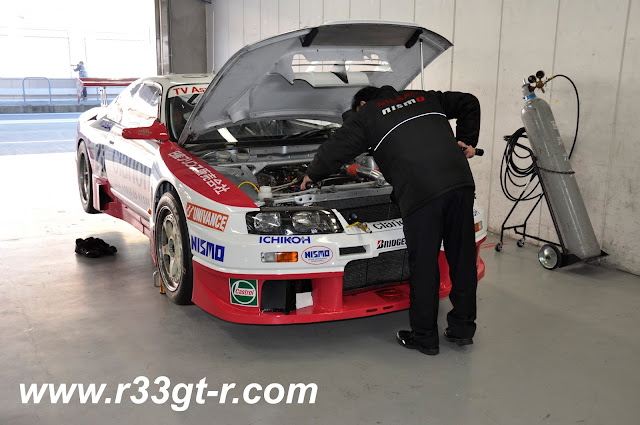 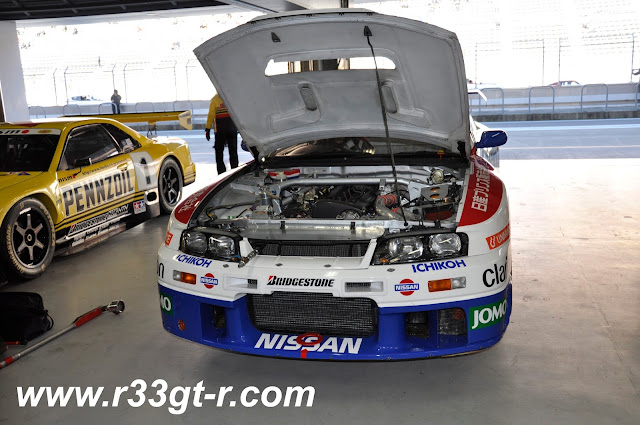 While this isn't a video of the 33 machines, this is the kind of noise (music?) we experienced when checking out the pits.

Without Dino, Alessandro and I then wandered over to the exit gate to the track, curious to see what kind of machines were being driven back in.
As Alessandro and I walked back towards the Pit Building, he found something familiar...
Readers of his blog will recall this post from his visit to last year's NISMO Festival where he spotted the same car. To be honest though, the car wasn't in good shape. Sure, it may have the NISMO R1 crate engine, but without looking under the bonnet it's hard to tell. But the carbon bonnet itself did not look well taken care of, and I'm not a fan of those LED lights in the front bumper...maybe some day I'll meet the owner and we can swap notes. In any case, he seems to be more addicted to NISMO parts than even me.

Speaking of NISMO, we then walked over to the tent which was showcasing NISMO's new Heritage Parts Collection.
NISMO also had several parts on the walls of the tent "being considered." I guess we will see whether or not NISMO makes them.  NISMO also had all of their Clubman Sports cars on display, as well as a new package they are now offering early model R35 owners, to bring their cars up to the latest specs.

We found Dino and then followed him back to the pits where we also found these cars again.
Finally, it was time to meet up with my hosts who had invited me to the event, so I parted with Dino and Alessandro and made my way back to the Guest Room, where I had a free lunch and drinks waiting for me.
After a quick meet and greet, we decided to hold off on lunch and walk over to the other side of the track to the Event Area to check out what NISMO was offering for sale to the public. This meant crossing UNDER the main track, but it was a nice 10 minute walk.
But this wasn't what I was expecting, so I walked outside looking for where all the other parts might be sold. And across the way, I saw:
Disappointed but secretly relieved I would not torture my finances, my host and I continued to wander around. 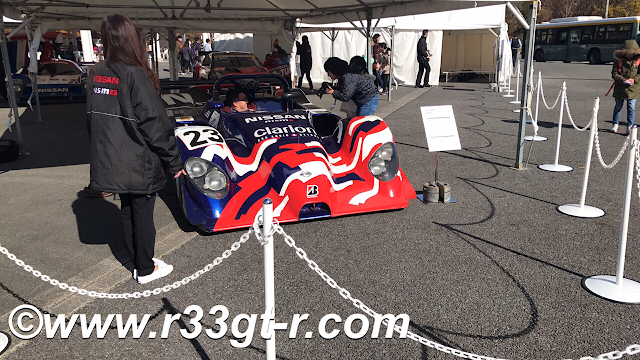 My host however was trying to find some Nismo Festival limited edition model cars, and so I lost him, but I did see that some model cars were on sale. 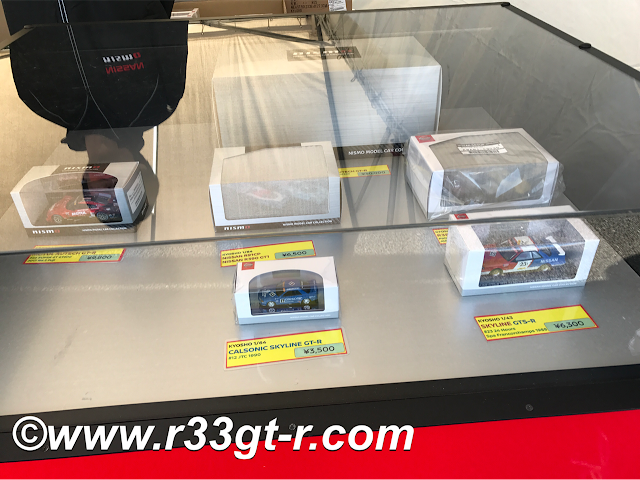 This being a Nissan/NISMO event, Nissan was also taking advantage to show off some of their cars. 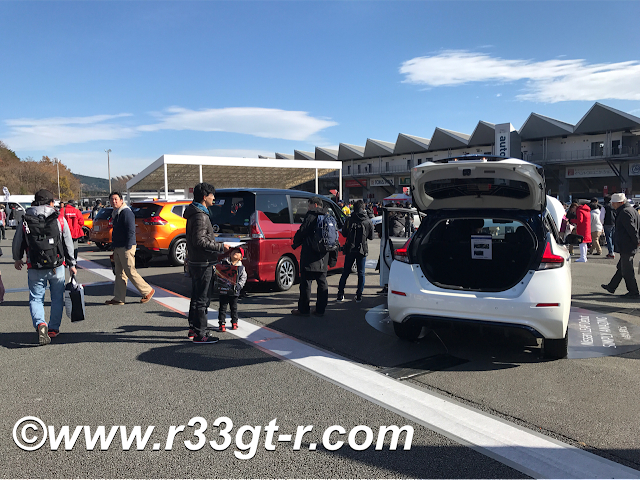 Finally, my host reappeared with his hard won limited edition model cars, and we walked back to the Guest Room for a bento lunch.

And right as I finished lunch and was checking to the schedule to see what was happening in the afternoon, I run into THIS guy:
It was only after I took this selfie did I realize I forgot to ask for his autograph! Darn! Well I guess I'll just have to hunt him down at Tokyo Auto Salon...

In any case, an eventful morning.  The afternoon would prove to be just as excited, stay tuned for Part  2 coming soon...
Posted by Aki at 12:54 AM

You probably didn't miss anything without a press pass. Been there, done that.

If you're friends with any engineers at Nismo/Autech though you'll probably have more info/background than any member of the press would. A company like Apple will instantly dismiss people that do so without PR present...

Also interesting to note that there is a port in each runner in the Nismo plenum. Could be interesting for secondary injection applications. But that's probably an engine-out procedure.