(Temporarily) Back on the S-Tunes! My Impressions...

So as I mentioned in my last post, I had my old NISMO S-Tunes shock absorbers temporarily re-installed by Ninomiya-san at BeAmbitious onto my car while the Ohlins DFVs usually on the car are being re-built at Labo Carrozzeria, the Ohlins distributor/service factory here in Japan.


When I went to pick up the car after Ninomiya-san had gotten the GT-R successfully registered for another 2 years, the first thing I noticed was that the front of the car seemed lower than before. But, as he had told me that the car did not pass shaken until he put the S-Tunes on, I assumed that the ground clearance was better with the NISMOs than with the Ohlins.

Anyway, on my short drive home, I immediately could tell the difference - after driving around for a while on the stiffer sprung Ohlins (which were probably more stiff than usual because it was long overdue for a rebuild), the S-Tunes felt amazingly smooth and supple. Still very sporty, and in fact, they responded very well to the dips and bumps in the road.  In short, the car feels very close to OEM, in that most people might be satisfied with level of firmness combined with good ride comfort.

Although these S-Tunes are sporty enough that I went to several track days such as at Fuji Speedway, as you can see in the photo below (sorry for the low-def), hard braking meant that the car would literally scrape the front lip. So, one impetus for switching to the DFVs was a higher (stiffer) spring rate. Although, as I mentioned in my previous post, the DFV technology also results in a very smooth ride.


Then, pulling into the garage, the front lip scraped... meaning that in fact, the car WAS lower than before.  So I don't quite understand how the car could pass the shaken rules with the S-Tunes when it was lower than the Ohlins, but oh well.  When I called Ninomiya-san about it, he thinks it might be due to the Do-Luck Roll Center Adjusters, and while that makes sense about the height, I'm still a bit confused about how it could pass Shaken... 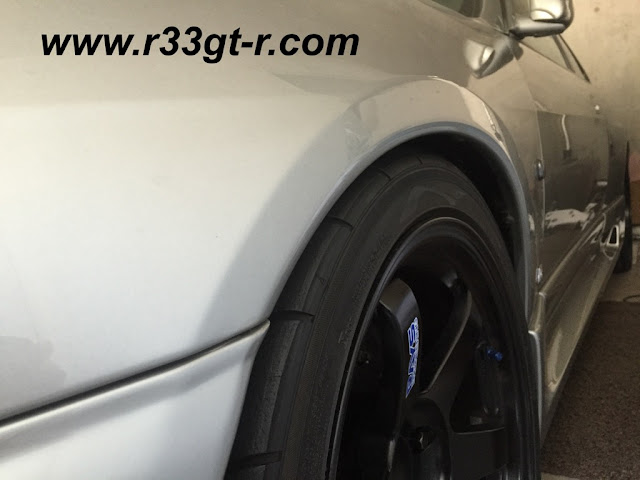 In any case, the car needs a proper alignment so I'm not driving it until I get the Ohlins re-installed and the alignment done.  Of course meanwhile I will simply have to have other projects to keep me busy, although I expect the Ohlins to be rebuilt and ready to go fairly soon. I'm really looking forward to experiencing the DFVs when as good as new!
Posted by Aki at 10:41 PM

Nice read, as was part one.

Love my Nismo S-Tunes on my R33 GTST S2. perfect combo for daily and track abuse

Glad you agree. They are very good for the price, the essence of balance.

Hi Ibo, yes I almost made that typo a few times...

Thanks both of you!