So the same Sunday I visited Nissan Prince to pick up some parts and replace the under bonnet insulation, afterwards I drove over to drop off my car with Ninomiya-san at his shop, BeAmbitious, in Yokohama near my house.  He is the only tuner/mechanic I've found who's been willing to do stuff most shops here in Japan won't.  For example, he had no problems (and even fixed an issue with the UK made brackets) installing the R35 brakes on my car (this was after Nissan Prince, Three-H, and even Mine's refused to install them), as well as the BNR34 diffuser install (again coming up with custom brackets). 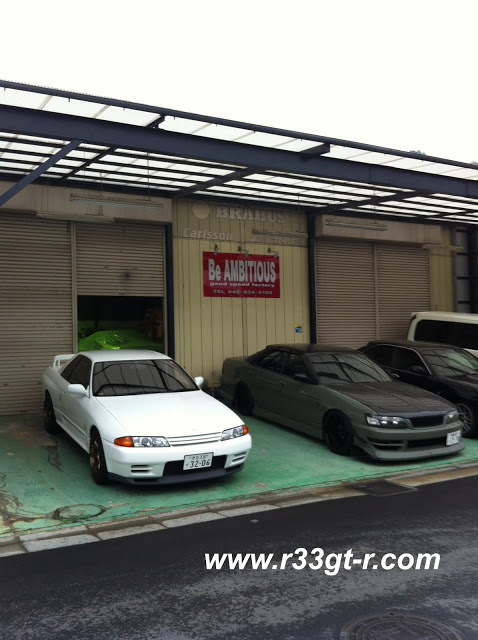 This time, I asked him to take care of the bi-annual "shaken" - the road-worthiness "inspection" + plus tax payment required for all street legal cars in Japan and then, as Dino had agreed with me when he drove my car, to have the Öhlins DFV coil-overs rebuilt.

The shaken is something that HAS to be done, by law... unfortunately, the stringent rules means that, for any car that is moderately tuned, unless you leave your car with someone who knows a few tricks, or is required to be scrupulously honest and "by the book" (i.e. a dealership), your car will fail and be "mandated" to have expensive repairs done to make it "roadworthy" again.

Because Ninomiya-san has a long history of working on race and drift cars, he knows how to "massage" them to get them road legal.  For example, I'm pretty sure (and he agrees) the Tomei ExPreme titanium exhaust, as fitted on my car, is too loud to be road legal. And yet he apparently has a special exhaust insert which he uses to muffle the sound to legal levels. For cars that are lowered, there are ways from setting coil-overs to their highest setting, to over-inflating the tires, etc., to ensure the car has 9cm between its lowest point and the road. In any case, I can trust him to get the car to pass shaken with minimum hassle and fuss.

Also, I figured that, since the car would be with him, I would leave my old Nismo S-Tunes shocks with him (that I did not throw out), so he could put those on the car while he sent the Öhlins in to be rebuilt. Even though I don't drive my GT-R as much as I used to, as I have mentioned earlier I had recently begun noticing that the ride seemed a bit too stiff, with the coil overs not responding quickly enough.

As a refresher, here is the link to when I first had these Öhlins installed, as well as the propaganda from Öhlins  (Japan) as to what makes them better than the average aftermarket coilover. And here is what Öhlins (Sweden) says (they are now called their "Road & Track" model).  These following two diagrams, both taken from the English language website, demonstrate the difference:


When I first had the DFVs installed, even though they were pre-used the car would glide over small imperfections... and now, on the same settings, I seem to feel imperfections more, and at speed sometimes the rebound clearly doesn't react as quickly as it should, meaning the car bounces fairly hard.

Also, since the model I have was released, there have been some improvements Öhlins has made to the DFV model. Or rather, it appears that they now offer a "rubber bushing upper mount" model in addition to the standard "pillow ball upper mount" model which is what mine are.

So I left the car with Ninomiya-san asking him to take care of everything, the shaken as well as getting the Öhlins rebuilt with those rubber bushings...

The following Friday, Ninomiya-san called me, with the shaken already done!
But when I went to pick up the car, he had some stories:

First, my car on the height adjustable Öhlins, set at their highest setting, only resulted in 8.5+cm off the ground.  So, he had to install the S-Tunes, which apparently cleared 9.0cm.

Second, my car was failed because the window film on the driver's side window was not clear enough(!) When I had the rear window and quarters tinted with dark film, I also had anti-UV film applied to the passenger and driver's side windows.  I did not recall what percentage of light they let in but compared to the rears the sides were relatively clear.  It turns out that the legal limit is 70%... that is 70% or more of the light has to be let through.  For some reason, the passenger side film DID let in exactly 70% and is thus legal... but the driver's side film let in only 69.5%!!!  Ninomiya-san thinks this is probably from all the usage (opening/closing) that the driver's side window which may have added minute scratches which then caused the difference.  The solution was to have the tint stripped off at the inspections center.  This however is a blessing in disguise as I will explain in an upcoming post.

Otherwise, he had no problems at the shaken center with the Tomei exhaust, or the Getrag conversion, or even the darkly tinted rear windows.

Didn't know that Shaken was so strict with all those extremely tuned cars you see in Japan. Guess most people know a person or a garage that ain't that strict to let them pass without complying to all the rules.

Enjoy the fact that your 'road worthiness' examination is almost but not quite according to the rules. Every year in the UK we also undergo the same (but less rigorous) 'rite of passage'. I would readily admit that even here we have interpretation of the rules from some chains generating work for themselves from the 'average Joe' fabricating work requirements just to squeeze a few extra pounds out of the job, to independent garages that actually know what they are doing. One year (in a rush) mine was taken to a chain (not by me but the garage where it was located at the time). Although passing with flying colours I did get a surprise that my car was listed as a Skyline 240K! A year later when at my usual garage I asked "why am I a 240K?" Turns out that as an import with no recognizable labels on the car the original garage didn't know what to call it so simply selected the only 'Skyline' on the list! I asked "can we change this then" the answer was simply "no, it is now listed on the government database as a 240K". Quite interestingly this has slowly spread near and far, the amount of road worthy 240K's in the UK are increasing!

My DFV on the NC roadster were always good, but I usually ran them on the stiff side and right at the bottom of the ride height adjustment. About #10 on the #12 point setting gave great bump feel without shaking the convertible to death.

These are all vague feeling things of course. Some people love long stroke suspension and the car diving up and down soaking up bumps. But I still like my cars flat and stiff even if they don't go point to point on a bumpy mountain road ultimately as fast.

stj88, yes, Shaken is a real pain in the okole, as they say in Hawaii. But it also depends on the inspector and his mood that day. Different test stations have different reputations for strictness. I guess I got a strict guy this year...

Russ - flat and stiff is good, except when it's like mine where the rebound didn't match. Was weird - had the right stiffness, but was bouncy. I'm hoping the rebuild (it's done, just have to get it installed) will make me happy.

Stay tuned and thanks everyone!

In Germany we have to do TÜV every 2 years for older cars, but the cost is a lot lower. If you pass first time it's under 100€.

Yep. It IS a rip-off. It's really designed to encourage people to buy new cars, keep the Japanese car industry humming along...