So for the past few years I’ve heard about, read about, and researched this ignition device: 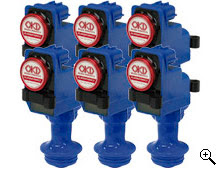 
For the R33 and R32 GT-Rs, as the amplifiers are contained within each of the Okada coils themselves, the PlasmaDirects, in addition to having more spark energy and multiple spark discharge, also do away with the transistor unit, which, being susceptible to early degradation due to the heat of the engine, is often a cause of ignition problems.

Here you can see the transistor unit, it's the grilled silver metal box on the back of the coil cover: 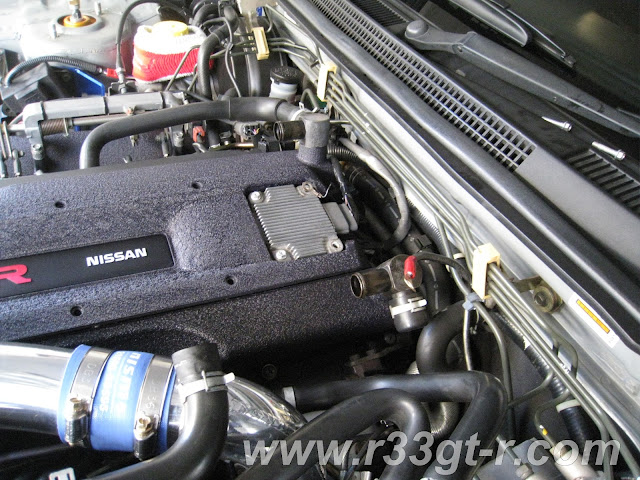 The Okada product itself seems similar to the direct ignition coils sold by Splitfire, which are priced less. Much less. While normally that would be an attractive proposition, I had heard and read about problems associated with this brand. And so, having spent LOTS of money for the Mine’s engine, there was no way I was going to risk being cheap this time. Research on the Okadas revealed either glowing reviews (all in Japan with GT-Rs) or “blah too expensive, not much difference” write ups on English language forums (for various other vehicles). But in any case, no reports of problems associated with the part.

Consistent with my goal of bringing my car into the 21st century, one thing I’ve wanted to do with the engine is to improve its efficiency, but maintain its performance. In the past, I messed around with a homemade “ram-air” system which I (placebo effect?) honestly believe made a slight difference in engine sound and pick up, but have not, to this date, experimented with spark or fuel.  And when I say “efficiency” – I am talking about gas mileage, cleaner burning, fewer hydrocarbons produced (standing behind my car with the engine at idle, one notices how poorly the fuel is burnt – especially as I think the sport catalytic converter may be on its last legs…)

So, having also asked around (and as my friend Thomas Mangum installed a set without any apparent problems), I decided that the next step would be these PlasmaDirects. Especially as he claims to run NO catalytic converter, yet his exhaust is not as “stinky” as mine!

Hence I began searching for the best price I could get on the Okadas, but soon discovered that well known tuning shop Jing TechnoEngineering (aka simply as "Jing-R") – claimed to sell an improved version of the PlasmaDirects -  having done something to the circuitry to improve upon the originals (unfortunately, their asking for price for their unit negated any discounts I could find).  Exactly what Jing-R did so is not stated anywhere, but the differences in this "kai" (改) version are supposedly as follows (translation below):

For 1-3, normally upon acceleration, needed additional fuel is injected into the cylinders, resulting in a high concentrate of fuel, but not all of it can be burned during acceleration and this unburnt fuel is can be seen as black smoke expelled from the exhaust.

As for 4), with a reduction in the percentage of carbon build up due to more complete burning at all engine rev levels, the life of the O2 sensor will be extended, and there will be less carbon buildup in the combustion chamber, the pistons, piston rings, and valves.”

Anyway so that is the theory. Just how different the standard PlasmaDirects are, compared to this Jing-R version, will probably be difficult to determine, unless someone has driven the same car back to back with both versions.  I found that for the price difference, and given all the glowing reviews I found on Minkara about the Jing-R version, that I would take a chance and go with this version - figure any little bit extra to help, right?

So anyway, had a few spare hours today, and the weather was right, so went down to the garage and did the install - but not before taking the car for one last spin to provide a baseline for comparison. 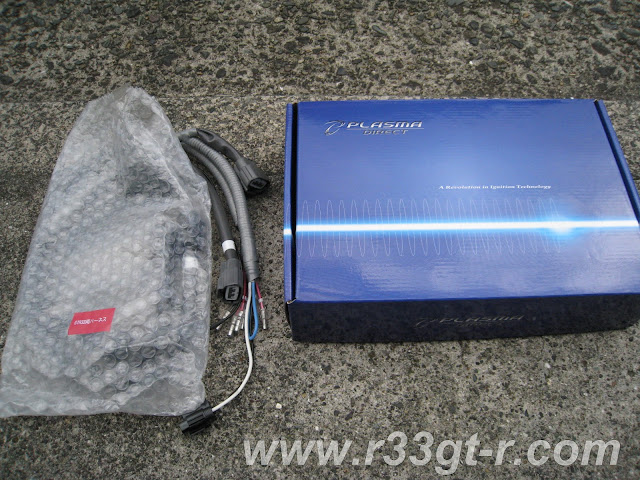 Stay tuned, my next write up will be on the install process, and then my impressions afterwards after I took the car for a spin.
Posted by Aki at 2:51 AM

Thanks for the write up Aki, have seen the Okada name floating around for a while, first saw it on youtube on Thomas' car and he seems to speak highly of it in his blog. Will be interesting to see your impressions as well as they are generally a little more in depth :p

Well first GM coils are hard to find here in Japan. Second I like to stick to tried and true. Third, if in using GM coils you have problems with the cover on, then I would be worried that those coils are not conducive to RB26 use, at least from a heat perspective?

Lastly, call me a schmuck, but I love having the "Skyline GT-R" displayed on the engine lol