Installation:
So when I opened the package, this is what I saw.  Six very pretty blue coils in the box, all wrapped in plastic, and then a dedicated harness for the R33 GT-R. 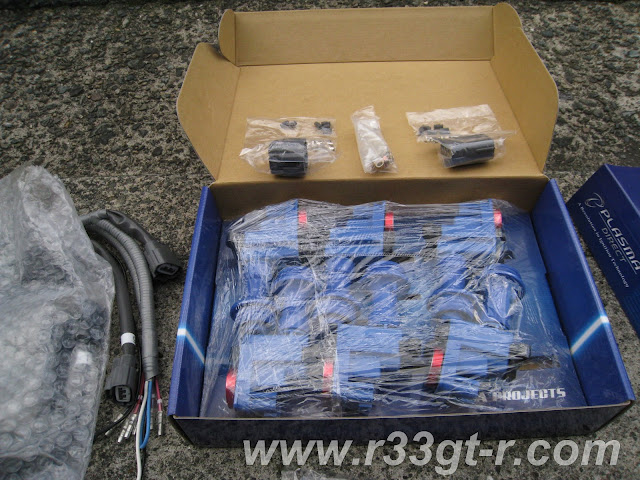 There were other bits and pieces which you can see at the top. (which I did not realize were electrical connectors for the harness for until AFTER I finished wiring…) which I didn't technically need following the directions, but as I discovered later would have been the smarter choice.

Anyway, first step was to remove everything in the way – this includes the tower bar, and the rubber breather tubes that on my car are connected to the Nismo Oil Separator.  Once out of the way, it was easy to remove the 8 Allen bolts holding the center cover (the one with the Skyline GT-R logo) on. However, in order to completely remove the center cover, the wiring involving the transistor unit also had to be disconnected. Once this was done, I was finally looking at this. 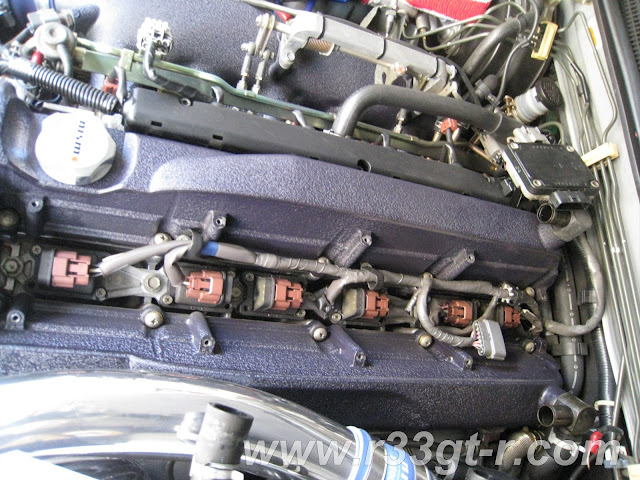 The next step was to remove the old harness (carefully) 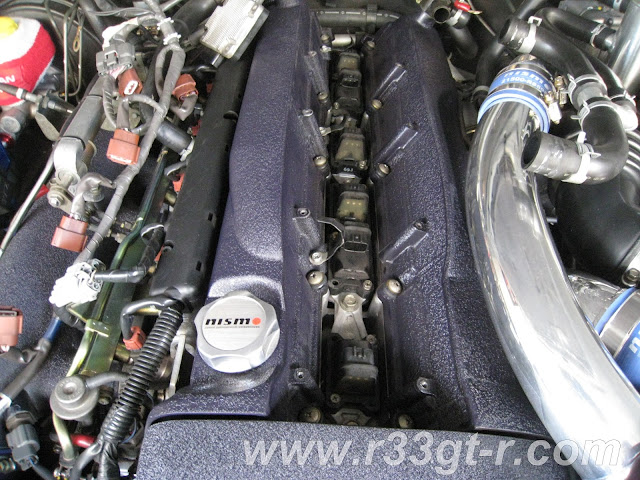 and then the old coils, which I then replaced one by one with the PlasmaDirects – making sure to ensure that the coil orientation stayed true to the OEM coils. This is important due to how the harness fits.  Only two bolts hold each coil in, and you reuse these bolts with the PlasmaDirects. Here is a comparison of the old and new: 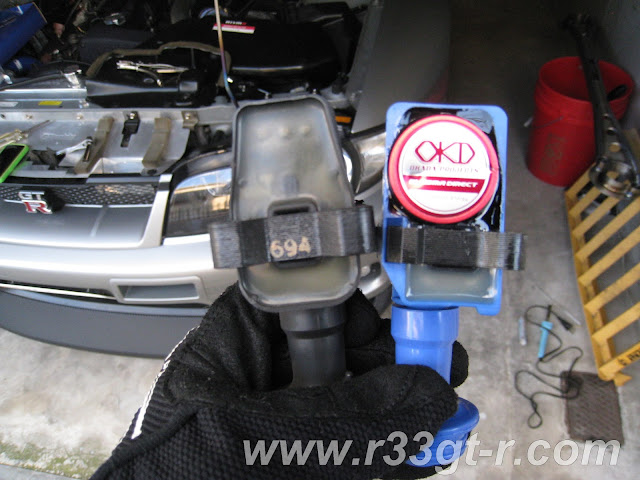 Once the new coils were in, the new harness was clicked in. Then, the real challenge began. The new wiring harness is supplied with the male pin leads already done up – so the idea is to for you to cut and install the female leads on the transistor side (making sure that you keep the numbers straight for each coil – hence the markings on the bottom of the transistor as shown). 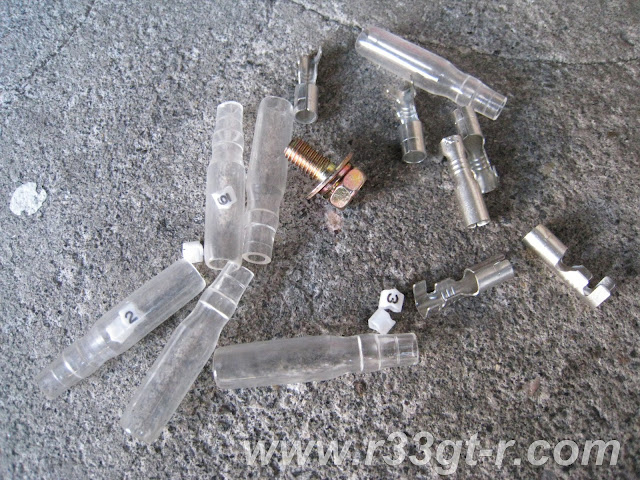 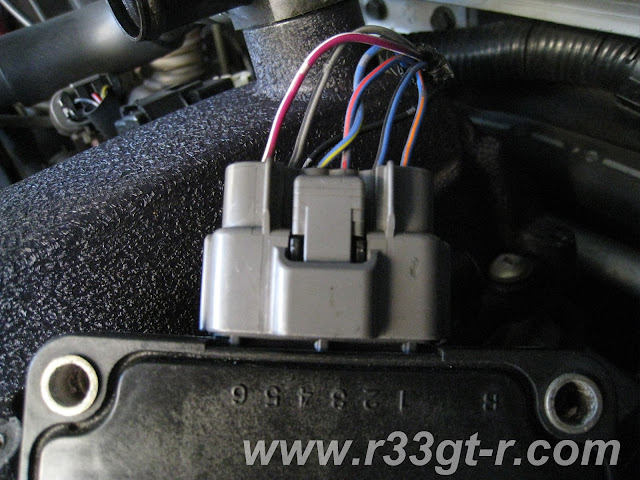 Putting aside the fact that there is very little space to work on this, I decided that I wanted to solder the female leads to the wires, in order to ensure proper connectivity.

About an hour later, with my fingers aching, I was done. I hooked the pins together, making sure not to mix up the wires (each lead comes with a number from 1 to 6 to ensure you don't), then affixed the nifty metal plate to the bottom of the engine cover, and replaced the cover. 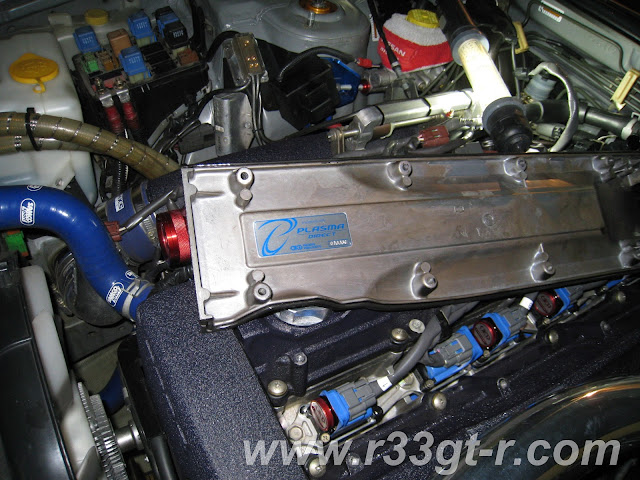 So now for a quick drive.

Driving Impressions:
Turning on the ignition, the exhaust note was definitely different. Hard to describe, but sounded a bit raspier and also slightly quieter than before.  As I had disconnected the battery for safety reasons, and also to put the ECU in learning mode, I went through the recommended procedure for learning mode – idled for a few minutes, then turned on the A/C while idling.  The engine sounded fine, although when the A/C compressor came on, it seemed to make more noise than usual.  But what was amazing was, even though the car was still in the garage, the amount of stinky exhaust was much less than what I had noticed before. Of course it wasn’t completely clean burning, but instead of choking fumes threatening to kill me after about 90 seconds, it was more like 4 minutes until the same effect… I then hopped in and took the car out.

Once actually driving – well the car seems to have more torque from the get go. Starting from a red light, the car seemed to want to leap forward.  I guess it felt like the engine was more “lively” so in essence I would say that there is definitely more torque on tap, which I could feel at lower RPMs.  Hard to say the car had more power, but the throttle did seem more sensitive to input. But with the car already making over 500ps, gains in torque at higher RPM were hard to detect.
This is consistent with the reviews in Japan (there are tons more but these are just those for the RB26 GT-Rs):

The 4, not 5 stars given by some all reflect the relative high cost.

Obviously I will have to wait awhile to report back on whether my bumper remains cleaner longer, and if there is an improvement in gas mileage - as well as a full drive report (ie continued high revs).  In the meantime, I will go ahead and say this is a worthwhile mod, easily installable but probably something that can be saved to the very last after all suspension, engine oil/cooling, exhaust, etc. mods have all been done.

Looking forward to people's comments! Placebo effect, or does this make sense?
Posted by Aki at 12:47 AM

Thanks for the review, Aki! I was really looking forward to your write up because I am planning to install these coils in the future, albeit the un-modified ones.

What I hope to achieve is better response and better fuel combustion (which leads to cleaner emissions!) And if I'm lucky, a small increase in horsepower and torque.

Does Okada Projects recommend a specific type of spark plug for using with the Plasma Directs?

But I'm glad you pointed out there are other modifications that should come first, such as suspension and cooling!

Was considering these as well Aki, I'd love to have the money to splurge on coil packs but I also agree with other modifications coming first.

Matto san, how much power are you aiming for, what type of fuel and at what injector duty cycle %? The 550cc doesn't seem like much of a jump from the standard 440cc?

Exactly what I was thinking too about the next step - except as Michael points out, I'm not sure it would result in much of a power increase from what my car currently makes?

Michael - I had to break out the credit card for these. Actually, I think the best pricing is if you buy from Okada USA - if you are located in Japan and given the exchange rate. While the JING version is not discounted, the standard Okadas are, and I personally am not convinced there is much of a difference between the two - if any it is not much, the biggest difference being the nature of the PlasmaDirects themselves.

Thanks for the comments guys, I would appreciate sharing of knowledge on the 550cc issue - I think the alternative are Bosch 1000cc injectors, but two questions - whether they are easily purchasable, and also whether they fit the stock fuel rail.

Unfortunately I'm not that clued up on the 12 hole injectors. I have heard countless good feedback on ID1000 injectors though. Not sure how popular these are in Japan Aki but many people in Australia rave on about how they idle better than stock injectors, have plenty of room for tuning, variance in dynamic flow rate between each injector is very low at less than 1%. To my understanding, these are Bosch EV12 1000cc injectors modified by Injector Dynamics to achieve the results they have. They are high impedance injectors so apparently you get rid of the resistor pack and the injector has an 11mm bore on the rail end which means either machining the rail from 10.5mm to 11mm is required or use of the adaptor plugs. I have also heard of people JUST managing to squeeze them into the stock rail by using lube and stock o rings.

Michael - thank you thank you thank you! I've actually stumbled across those ID1000 injectors but this is the first anyone has confirmed that they are modified Bosch EV12s. Turns out that the Tomei fuel rail is 11mm so sounds like that might be a good combo... know of any resources so I can get answers on fuel pumps, etc. and other mods to support this (already have a high capacity pump but someone has suggested I get a dual pump set up). Any help would be great! Thanks!

The Sard 550cc 12-hole fuel injectors are easy to get hold of, especially if you're in Japan.

They are a direct fit for the BNR32, BCNR33, and BNR34, so you can use the stock fuel rail (a bit of re-wiring needed though). These are also high impedance injectors, so there's no need for the resistor pack.

Check out Midori Seibi Centre's blog, they have helped many GT-R owners install the Sard 550cc. They run every car on the dyno afterwards, so you can check whether those power levels match your car.

I'm not aiming for big power, just a light tuned engine. That's why 550cc should be sufficient for me. They only serve 98RON here, and I'm still running the stock 444cc injectors.

Aki, what injectors are you currently using and what's the max injector duty cycle%? Might be able to hold off getting larger injectors unless you have some big changes planned that we are not aware of! :P

For reference, a single 276litre/hour (nismo, tomei etc)fuel pump at 12.5v has seen up to 540PS on a few gtr's here in Australia. Bear in mind the fuel pump needs to be rewired for a constant 12.5v to achieve such results and injectors with enough capacity are also required.

So you may not have to fork out for another fuel pump just yet. Adding another pump in many cases can be a costly exercise.

Matt, you're spot on, I think it's not really necessary to have massive injectors in order to make power, take the Mine's GTR's for example, they all use 600cc injectors.

I don't think I'd need more than 600cc either unless I go down the E85 route in the future. Too bad Injector dynamics does not make 600cc injectors.

Guys - thanks for the replies! Well I suspect my car, with the Mine's engine, uses those 600cc injectors. So yeah if I am not after more power, then the R35 570cc injectors or the SARD 550cc ones are fine, so long as they fit.

I guess the question is, would I need a remap if I replace the current 600cc ones with one of these? I mean the smart man would say yes - so in conjunction with these Okadas, and some other items I'm thinking about, I would wait to replace the current injectors until then. But then again, if I want to produce more than the approx 550ps I have now, I would think larger injectors are needed? Any such thing as a 1000cc 12 hole? (turns out the ID1000s are not 12 hole).

Michael for the 540ps figure, was that rolling road or dynapack? If you recall when I got the Tomei exhaust installed we did a run and got similar numbers with the current setup.

Although I should also mention that I'm happy with current power output - but I DO want cleaner burning, more responsive, which I think the 12 holes would be able to deliver. But, if I'm going to the effort, might as well have the flexibility of more power in the future...

I think the ECU should definitely be remapped for new injectors. It's better than having bad air fuel ratio which might lead to something bad in the long run.

And while you're remapping the ECU, and in the process of finding more response, maybe you might want to consider switching to R35 mass air flow sensors?

Good point マット - although some of the ECUs can go MAF-less, right? Will have to research the pros/cons for this.

Yeah thanks for the reminder on these 6 hole injectors! I'll have to talk to some tuners here and see what they say about going for the 550 vs these 850s.

Nice write up glad i found your blog.
first time ive heard of these coils