Every once in a while, a friend of mine (usually a fellow R33 GT-R owner) sends me something interesting.  In this case, my friend Tom from the UK, owner of a very clean black R33 GT-R (and a fellow admin in the owners only Facebook ClubR33) happened to mention that he was about to take apart and repair one of his folding mirrors. So thinking ahead I had asked Tom to take photos as he repaired his side mirror, and not only did he do that, he also wrote up a guide! Which he has kindly allowed me to publish on this site.  Please enjoy (not sure why the font changed on me when I cut and pasted over):

Firstly, it’s important to note this is not really an easy job, more for someone confident with small fiddly components. That said its more than possible with simple tools and for me at least it fixed my issue. I found a guide on a site in Australia but that one was distinctly lacking in pictures so hopefully this one is easier to follow. Remember when working with 25 year old plastics they can be brittle so take your time and be gentle.

*Please note that the screws to be undone are JIS Japanese industrial standard. That means they are subtly different to Philips and Pozidriv. Make sure you have a good fitting screwdriver. For the 3 screws on the mirror base you may even need a bit to fit in a socket wrench. They are very tight and have thread lock applied*

First task is to remove the door panel. This is done by removing the 3 screws along the lower edge. Then the one in the bottom of the door pull. Gently lever the door handle surround away and put that to one side. Same with the window control switches pull up gently and unplug the switches. Last is the little pop clips just pull gently on them (located along the sides of the door panel) and the door panel will lift out of the groove at the top. Lay the panel down safely somewhere safe so as not to damage it. Before you go further if it works, using the adjustment point the mirror glass up to the sky. (this gives room to pull the glass from the bottom with your fingers)

Once that is done, we can now start to remove the door mirror itself using the following steps:

1. Remove the small plastic triangular trim from the inside of the mirror base. This just pulls off.

2. You will now see the wiring loom for the mirror, the mirror needs to be unplugged so trace the loom along the door you will see the white connector. If you still have it the plastic membrane on the door can be peeled back to gain access to the plug.

3. Unplug the mirror and using a multi meter we now need to test the wiring and switch in the car for functionality.

4. The plug in the door has 5 wires. We are interested in the 2 green ones (one light green with black stripe, one dark green with black stripe) very carefully with the ignition key turned to accessory position we need to probe the pins in the plug for the two green wires. With the mirror in the folded position first you should see 12v (or -12v) and in the open position the opposite of what you saw in the folded (either 12v or -12v). *If you short the probes on the multi meter across more than one pin it will blow the fuse so be careful- Perhaps ask someone to hold the plug as you test it*

5. If you see a reading of 12v or -12v in both folded and open positions, you know the car side of the wiring loom is good.

6. Next step is to remove the mirror from the door and thread the wiring through the hole. This is done by removing the 3 10mm bolts from the mirror base. *Be careful not to drop the mirror*

7. Now the mirror is free from the car, we can remove the glass. As it is adjusted up there is room to slide your fingers under from the bottom edge and gently pull it away. The glass hooks in the top and clips at the bottom so must be done this way. Place it down somewhere safe.

8. With the mirror free, next is to undo the retaining screw for the loom. This is located behind the foam as shown in the picture. Cut the foam neatly with a sharp blade for the best chance of putting it back where it was. In this case it had just fallen apart. 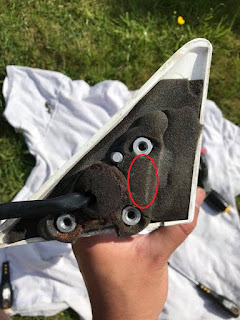 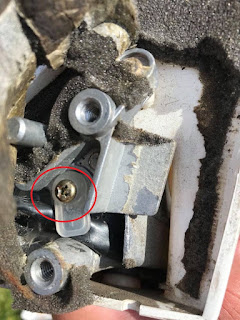 9. Next the three screws on the base of the mirror need to be removed, as previously stated these are tight. They have thread lock on them. For this I used a ¼ drive socket wrench with suitable bit to undo them. 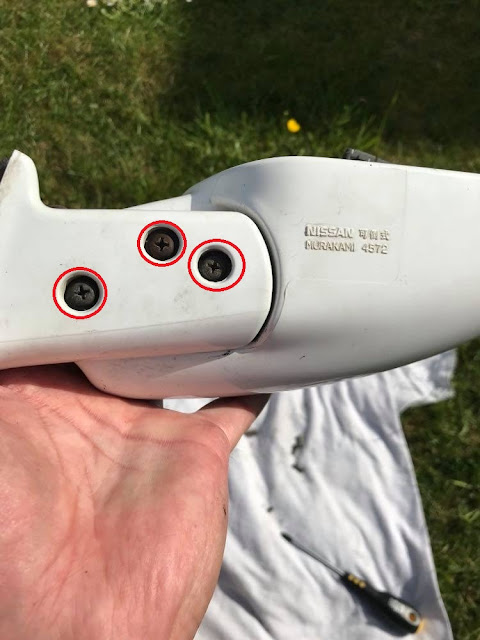 11. You should now have access to the screw on the base, remove this as shown. 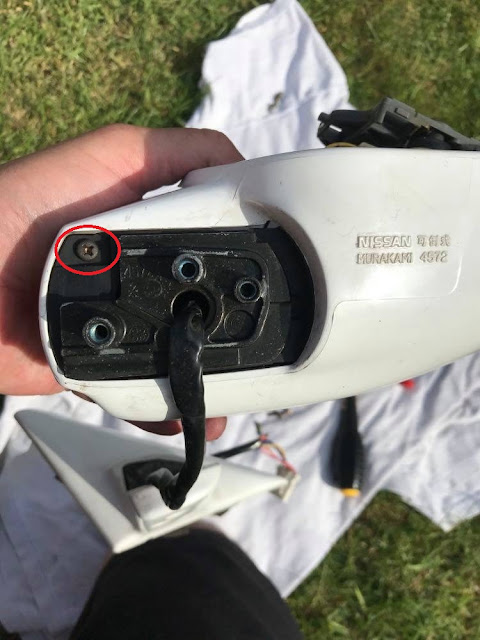 12. Now looking at the mirror aperture where the glass was, there are 3 screws to remove the glass adjustment motor from the bracket behind, these are shown below. 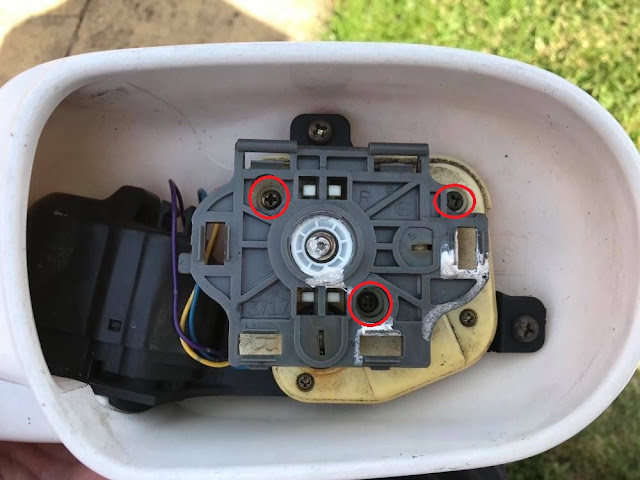 13. With this removed you can now remove the three holding the mirror folding mechanism from the painted mirror cap. Undo the screws as shown below. The painted cap now can be removed and slid down the loom to move it out of the way as best you can. 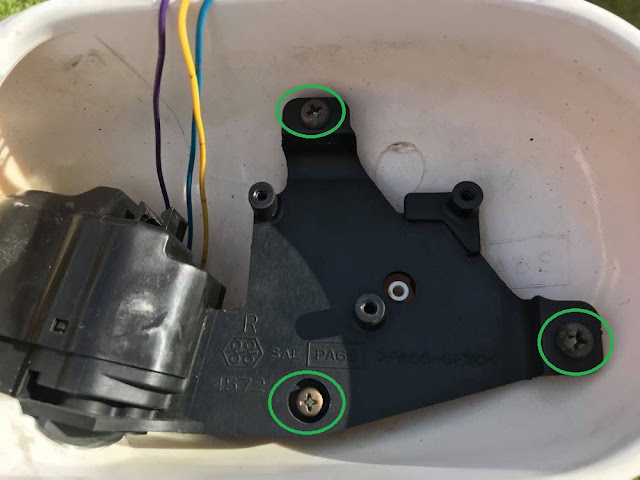 14. Next is to remove the cap from the motor / gearbox assembly. This is held on with 3 little tabs 2 are easily visible but the third is behind some tape. Carefully peel the tape back to reveal the third clip. I used a small flat blade screwdriver to pry the cover off the clips and lift it off. *Pay attention to the routing of the loom as it exits from under the cover as it will need to go back in the same place, this is easy to see* 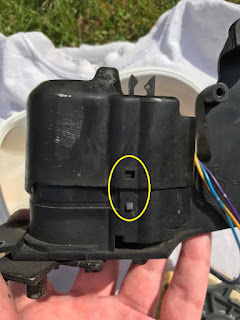 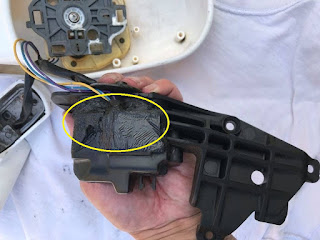 15. With the lid removed you are presented with the motor, the PCB for the folding mechanism and the gearbox. 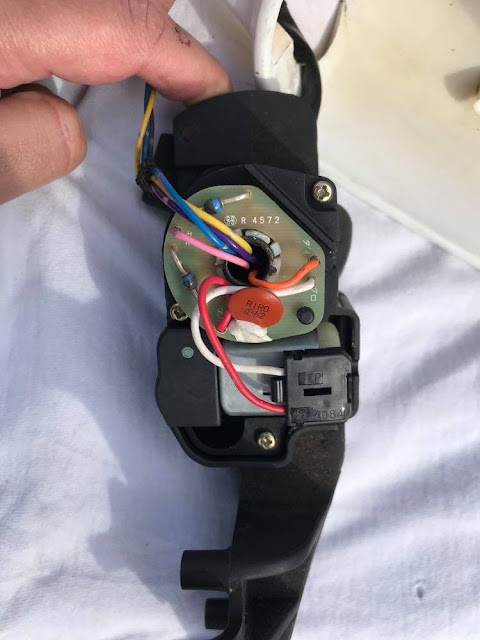 16.  Now this is where the fun begins. Remove the connector from the top of the motor, this is just 2 pins and pulls off easily. Then undo the 3 screws highlighted below. I have also highlighted the split line on the gearbox this is important as we need to pry this open on the next step. *Note the PCB is held onto the cylindrical post by the white clips but also has a locating peg on the lower right of the board to make sure its in the correct place* 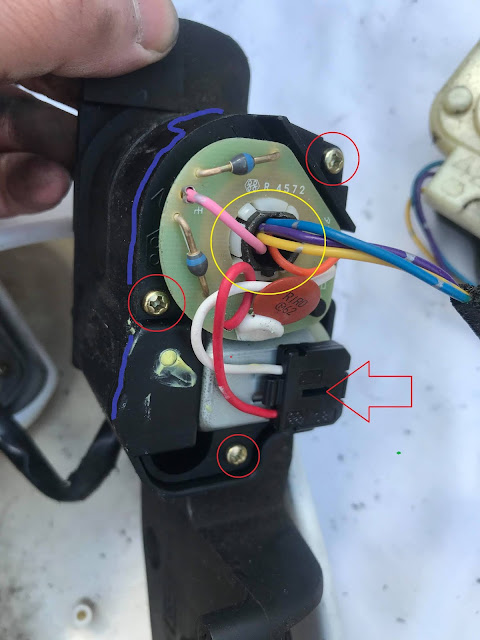 17. The next step is to lever the lid up off the gearbox. The reason for doing this is to slide the PCB and the white tabs holding it on off the black cylindrical post running up the centre of the 2. This subsequently allows the white tabs to be pressed in and the PCB lifted off the white plastic base. This is where the troublesome contacts are. The image shows the gearbox lid pried up around 5mm you want to lift it around 10mm to be able to press the white clips in. If you lift it all the way off it exposes the gears and ideally you don’t want to do that. 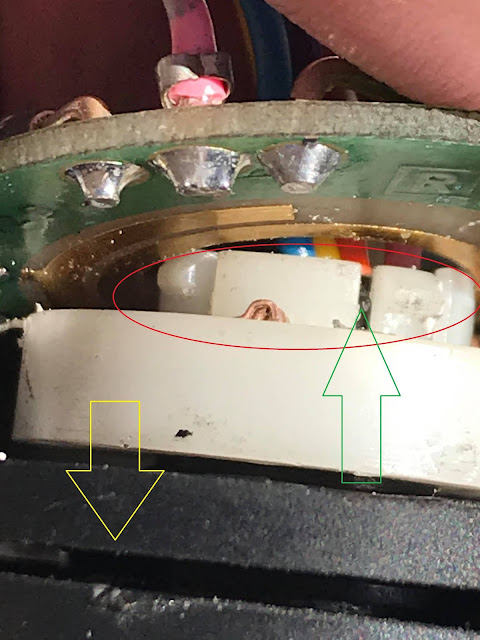 18. What you will see once the white plastic and the PCB are separated is the two copper coloured contacts. One or both will be just broken away from their mounting points. This is what causes the folding function to stop working either in one way or both. In mine one was still in place hence it opened but wouldn’t fold. 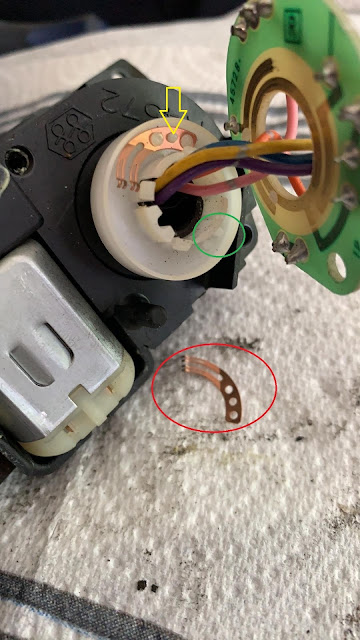 19. The way to fix the issue is to reunite the contacts with their mounting post and glue them carefully back into place. The centre hole lines up with the peg in the white plastic section. Note the orientation from the picture above. The contacts are designed to touch the tracks on the PCB above it so they must be proud of the base when glued back in. 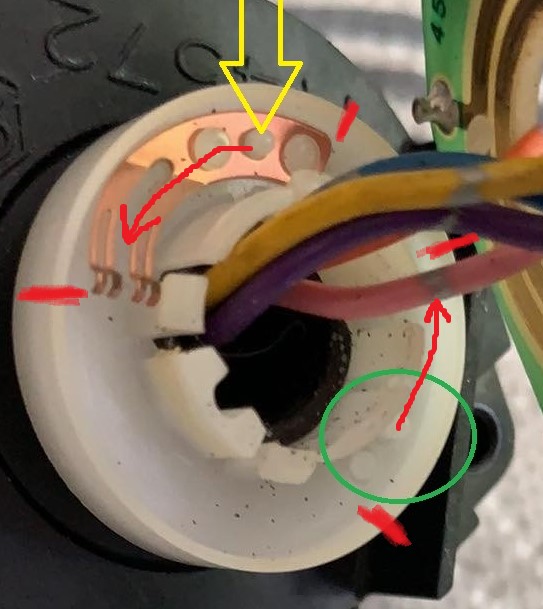 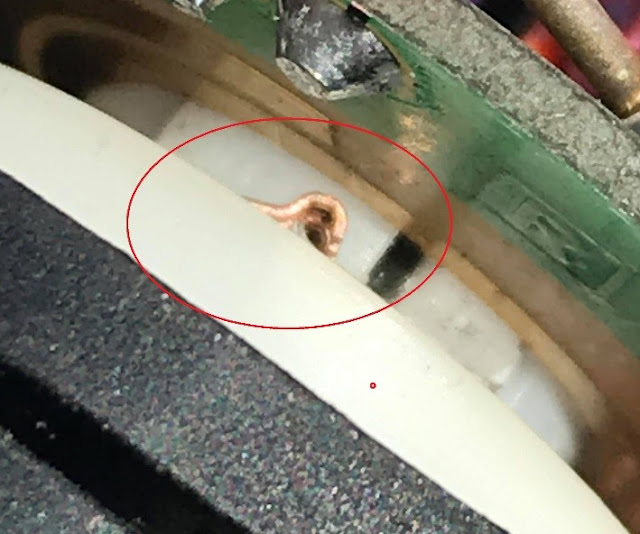 I have tried my best to show here the orientation at which they go back in. Bear in mind the arrow on the right shows the placement for the second contact. If both contacts have fallen out with the motor at the bottom the left side runs as shown and the right side the opposite.

20. With the contact glued back into place give the PCB a clean with some electrical contact cleaner and carefully push it back over the white clips in the contact housing below. The assembly can then be slid over the black plastic cylinder on the gearbox cover. *Note as with disassembly the plastic posts will not depress if the black plastic tube is up inside it too far, so be sure to keep the white part free of the black part (shown by yellow arrows) until the PCB and contact housing are clipped securely back together. 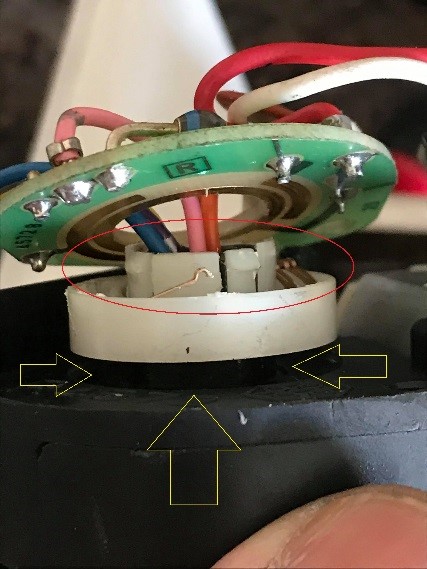 21. Reassembly is the reversal of the above steps. Be careful not to damage any of the screw threads when putting them back together. After step 20 it may be a good idea to take the mirror out to the car and test it. I asked my wife to help me hold the mirror while I checked the function of it. * Be careful when reinstalling the glass remember it hooks in the top and clips at the lower edge*
*****
Anyway - hope people found this kind of post useful. If you've got something you would be willing to share, please drop a line and let me know!
And now back to posts about my car...
Posted by Aki at 5:57 PM

I recommend using an impact driver if pressure and a normal screwdriver won't break the screw free, use a good amount of pressure on those screws to ensure it cannot cam-out the bit. I've done this before on phillips bolts that were bent to such a great degree that the bolt was actually very hot when I removed it. I would normally recommend heating the bolt to break the thread locker but that's a good way to destroy the plastic so...

Looking to get these repaired.Both of mine are messed up. =( Do you know anyone in the US that I could pay to repair these?