OK OK - Maybe I have an LED addiction?

So in my last LED post for 2018, I mentioned that I had been tempted to replace the rear turn signal bulbs with LED ones as well.  But, I was too lazy to figure out how to wire in the resistors - but a couple of you quickly educated me on replacing the OEM turn signal relay with one that works for LEDs.

I may just have to go that route in the end, but for now, I was able to find some orange LEDs that not only claimed to be super bright, but had the required resistors already built in! I am too lazy to figure it out, but one question I had on the relays was, would using such relay require me to change out ALL bulbs in the turn signal circuit (so all of the orange ones - front, side and rear) or would the relay be able to handle a mix?

So for now, since I wanted to experiment and see how much brighter LEDs were for the turn signals, I went ahead and ordered these:

Flash forward a few days and I got this in the mail: 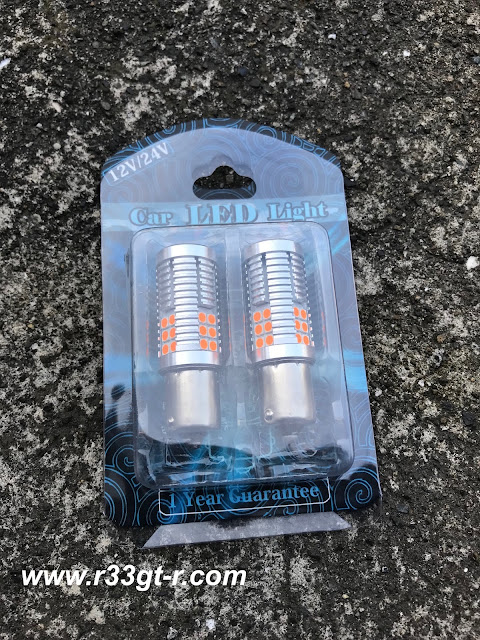 With apologies to my Chinese friends, yes, it appears Chinese quality cheap... But hey since most  smart phones and electronics are now made in China, I'm not going to just on packaging... for now. After all, performance is everything in the end.

So here is how my car looks with regular bulbs:


And then the difference between the LED on the left and the regular bulb on the right (check out how the incandescent bulb on the left turns on slightly before the LED bulb does).

And finally with these LEDs on both sides:


So what do you all think? Frankly, while I like the brightness, here is what bothers me - the light isn't as evenly diffused across the lamp housing. It's more pinpoint really. Also, yes it is very bright - I wonder if it's too bright?  Finally, while I was handling the bulbs and switching between the LEDs and the regular bulbs (to take these videos - I neglected to take the one with regular bulbs until AFTER I put one LED bulb in), I realized these LEDs run VERY HOT!  Is this normal?

In any case - I think more research is needed here. Maybe a cool upgrade would be an LED strip that lights up directionally, like the newer cars? Keep the outside housing the same but just replace in the inside with such a strip... that might work?

But I'll keep these for now!

The LEDs run very hot because the built-in resistors that keep the flashing at the same speed are going to dissipate the energy as heat.

It looks like the "smart relay" replacements will work whether you use incandescent or LED: https://www.theretrofitsource.com/original-tapturn-strobe-led-flasher-relay.html

Regarding "Chinese quality" - I think most people that are not blind to their flaws will admit that mainland China especially has a "chabuduo" attitude towards quality. It is an admirable trait for getting through hard times but to keep growing as a society it is important to care about attention to detail. The safety record for many things in China is not good and I think people in Hong Kong and Taiwan are quite aware of these things...

I understand why you're doing it but most LED bulbs won't give you the result you want or are expecting because they were not properly designed to work with reflectors to start with. They will give you the brightness - and those look way too bright IMO - but quite often fail at giving you a uniform spread or even giving out more usable light.

If you really want to update the look of them you're better off buying another pair of taillights and having someone do a custom job with SMDs on a circuit board, COB, Rings, etc, which would also allow for some creativity and customization. Example, having the indicator/reverse/fog as one bigger indicator with separate LEDs for reverse AND fog on both sides.

I know this might go against your stock look style philosophy, but aside from cost, why not go with zleds?

As the other anon has said most LED bulbs won't give the desired result but it is 100% possible to create an LED bulb that has the proper light pattern. Midori Seibi has managed to figure out how to retrofit LEDs to the R32 headlights with proper cut-off and improved light output, you just have to have some actual optical engineering in the design instead of blinding sticking SMD LEDs in a random pattern and expecting great results.

They run hot because of the light output. A LED that has the same lumen output as an incandescent globe will always be cooler. Does it annoy you that they are flashing at slightly different rates? That must be to do with the internal circuitry of the individual LED modules (quality control) as well as the slight difference in impedance through the cars wiring L/R (slightly longer copper wire run).

where are the updates sir? are you ok?

He's a lawyer at Nissan right now, I'm sure he's very busy given some of the things going on in the news.

Sorry guys for the silence. And thanks for the comments on the LED mod. To be honest, thinking about going back to regular bulbs, at least for the turn signals. I DO like the brightness on the taillamps...

And yes, it's been quite crazy at Nissan's legal department lately...