With my mind made up to order the Phillips red LED bulbs for the rear parking/brake lamps, I went ahead and placed my order with Rakuten, and then a few days later:

First thing I did was to measure the width to ensure it would fit. 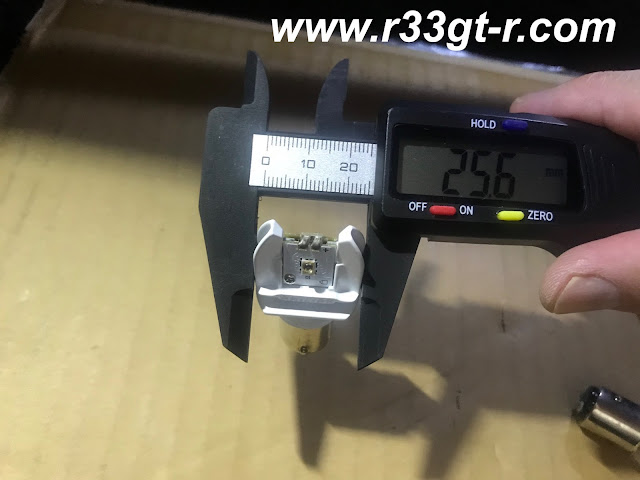 Then it was off to the garage to install on the car.
So after installing, the increase in brightness was immediately apparent. I was definitely going to switch to these!
You can see that the left lamp, which is the standard incandescent, looks a bit dimmer, and a bit more reddish, than the the brighter LED on the right lamp. Although - is it my imagination - the LED side actually appears more orange than red??

First, brake lights only - note how the LED on the left lights up a few milliseconds before the standard incandescent bulb on the right.

More interesting actually is how the right side lamp "fades out" - which I actually think is very cool! (Should I keep the standard incandescent bulb??)

But, with the brake lamps coming on a few milliseconds faster, that means a quicker reaction by the car behind me, thus resulting in a lowered chance of being rear ended, right?
Second, the parking lights only. Again see how the LEDs light up faster.

Third, the parking lights on - then braking - so this is how it would look like running at night.


Putting aside the coolness factor of the standard bulb fading out, and of course the safety factor due to the LEDs coming on more quickly - I noticed upon close inspection that the "fins" of the LED bulbs were causing shadows.

As you can see above,  it looks like the standard incandescent bulb side also has some vertical lines but they are not as obvious as the LED side... what to do...love the brightness but not so sure about these lines... (and yeah the orangish color bothers me a bit too...)
Posted by Aki at 11:19 PM

The LEDs I use actually eliminated the "shadows" caused by the incandescents. It all comes down to how the LED chips are placed and the "housing" of the bulb itself.

Keep to stock. Unless you find a good LED ones with no shadows... wasted money tho, but you can always sell it. hehe.

so did you replace all four lights? or just the outside two