So even though the aftermarket offers full LED conversions for the 33's iconic rear lights:
I never thought it looked right. Somehow, the natural analog glow from a light source behind the four red rings always looked perfect. And while modernization is a good thing, not at the expense of loss of character, I believe.  So I never really thought about an LED upgrade for the rear lights.

However...After my last visit to Hong Kong late last year, I had the pleasure to meet with a few like minded GT-R friends.  One of them had an R32 GT-R with impressively bright brake lamps.  When I asked, he told me he was using red LEDs in place of the standard bulbs. I had previously tried out a white LED bulb in the rear foglamp area and always thought it a bit uninspiring.

Doing some research, I found out that indeed, with a red lens, one SHOULD use a red LED. The Sylvania Automotive lighting website was particularly useful.

So the answer seemed simple - just buy one of the 1157R LED ZEVO bulbs from Sylvania Automotive's lineup - except the Amazon sellers I found would not ship to Japan. Plus, of course, just in case I would want a bulb that is recognized as legal for use in Japan, right?

Thus, I began hunting for other LED manufacturers who sold directly in Japan.

Meanwhile, another issue raised its head. As you know, I have a Series 3 (kohki) BCNR33, which means when braking, only the OUTER 2 of the 4 afterburners lights up brighter. When not braking,  at night, the inner two and outer two turn on and have the same brightness.
I knew that the outer two thus used a 2 filament bulb (1157 aka S25 double) rated for 21W and 5W, but had assumed that since the inside ones did not light up, those bulbs were single filament bulbs (1156 or S25 single).  Thus, I was planning on buying or creating my own adaptor  - 1156 socket (in the car) to 1157 socket.

Luckily, I then checked my own BCNR33 technical page and found that the series 3/kohki cars listed the usage of four 1157 bulbs - meaning that while the inside bulbs were also the two filament 1157s, apparently they never receive current for the higher voltage (because the braking current never reaches them).  Intrigued, I went to the car and found that indeed, the inside bulbs were 1157 bulbs, and their sockets were designed for 1157 bulb bases (180 degrees difference in the pins but pins at different heights).  But, only 2 wires leaving each socket, thus confirming that only one filament would be lit up.

So, this meant I could simply buy four 1157 LEDs. It also meant that I would not have to worry about different levels of brightness across different bulbs, if I used bulbs from the same brand and which had the same model number.

The next step was to find an LED that actually fit! Many that I saw seemed to have new shapes much larger than a regular incandescent bulb. And, the LED would have to give off light not only to the sides but also directly to the rear (so near 360 degree illumination, just like the incandescent bulb).

So, back to the car to measure depth from the base of the socket to the edge of the inside of the lens (68.5mm) as well as the diameter of the hole the socket would have to pass through (26 mm).  The S25 bulb I measured was 24.6mm in diameter and 48 mm tall from the base. 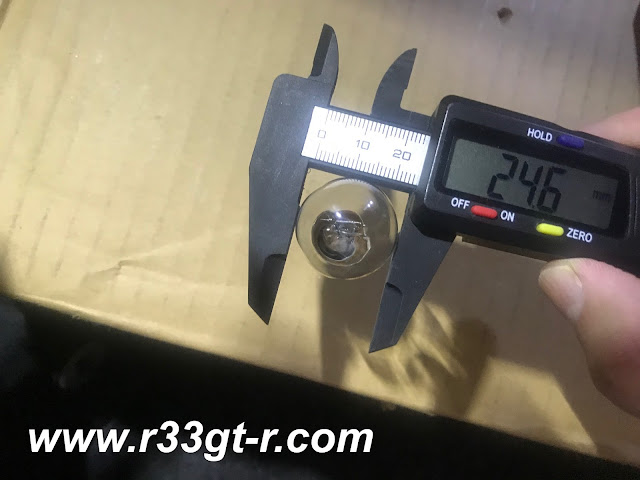 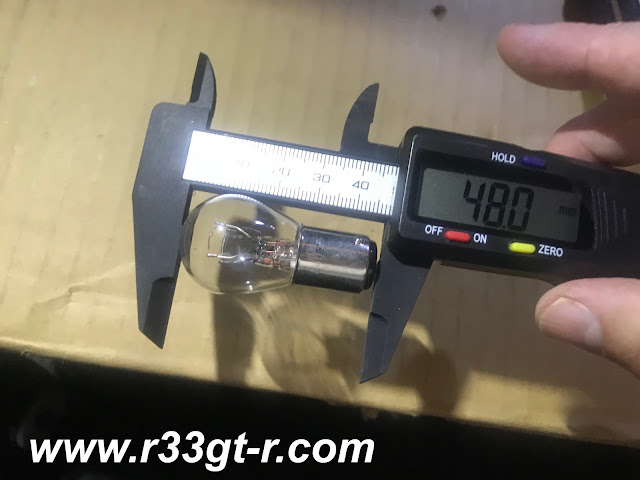 Now came the heavy duty research part. First, while I studied the various designs available, most of these seemed to be cheap Chinese ebay-type offerings. I am NOT going to entrust my own personal safety to LEDs which might prematurely fail without warning.  That means I would like to stick to name brands, presuming their products are built to last.

Second, I wanted LEDs that would be brighter than the regular halogen bulbs.  To do this, I first had to look up the brightness of the average incandescent 1175 bulb. One site I found claimed a standard 21/5W bulb would have a brightness of 440lm and 35lm. I wasn't sure what to think of this as no LED 1157/S25 double bulb I found, could match these numbers. And yet, major brands like Sylvania and Phillips seem to be offering bulbs with lower lumens numbers yet claim they are brighter than the standard bulb.

I found another guide that demonstrated that for the same lumens, it takes more wattage for an incandescent bulb versus an LED bulb. And yet another showing conversion formulas as well as showing that incandescent bulbs have a typical luminous efficiency of 12.5-17.5 lumens/W versus LEDs at 80-100 lumens/W.

At this point, I was totally confused. The only thing I could figure out was there there appeared to be two types of aftermarket LEDs - those that use SMD ("surface mount diodes") and those that use CREE chips of various specs. The SMD bulbs almost always listed a large number of chips, while the CREE chip bulbs seemed to be more compact and have 8 chips or less.

What I ended up doing was ordering, again from Philips, their red S25 double bulb - approved for car use in Japan, and having a light output of 115 lumens (braking) and 15 lumens (taillight). 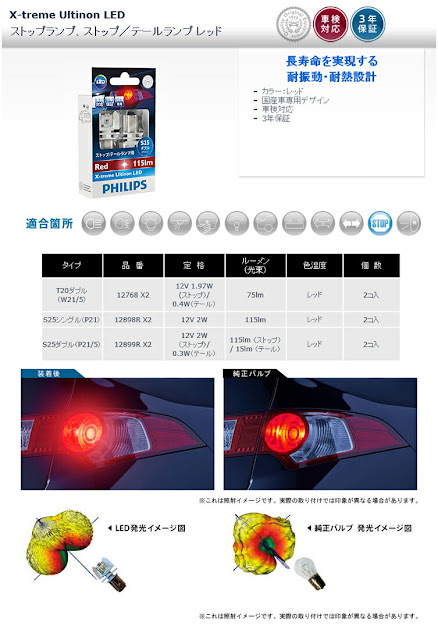 In my next post, I will demonstrate what happened when I got them...and my final decision on using LED bulbs...
Posted by Aki at 11:42 PM

I have been running these on my R33. the Philips parkers are brighter in a daylight test against the OEM halogen bulbs.

I've tried Philips LEDs too, but wasn't that impressed in terms of colour.