Here in Japan, it's a tradition at the end of the year to "clean up" - your house, your car(s), your finances, whatever... in fact it was hard to get a reservation to get my car professionally detailed so the following actually took place in late November of last year.

Anyway, so while I've been to RAPT several times in the past to get my windows tinted, my wheels painted, get a new look by painting the front lip spoiler and NISMO 400R side skirts installed, and the interior professionally cleaned, I've never yet had the exterior properly detailed. Until NOW.

So here is the car before I took it in. This was when I went back to the Nissan dealership to pick up a few parts - details coming soon! LOL.
When I dropped the car off at RAPT, initially we decided to go with his "standard" glass coating package, which is "G'Zox" from Soft99 Corporation.

I found an English website here that somewhat describes it: http://www.gzox.com/english/

Now, I'm not an expert on these so called "glass coatings" - I know they are big here in Japan, and presumably do away with the need to wax, polish or apply sealant to one's car on a frequent basis. Supposedly, instead of just coating the paint, these products "bond" to the paint, hence their longevity of 2-3 years at a time.

However, a day later Kabe-san called me to explain he had changed his mind. He wanted to use a different product, the top of the line one he offered called "Echelon Nano-fil" - and this also is a "glass coating" like the G'Zox. Best I can tell from the propaganda, this one has a more interlocked structure, which presumably explains why it lasts longer, but also might take longer to set.

Kabe-san explained the reason why he wanted to use the Echelon is because I keep my car fully garaged all year round, and don't drive in the rain, this would allow me to take advantage of the month that it takes for this coating to fully cure.  The G'zox works great but has a much shorter curing time, and he confessed, a shorter lifespan.  With the Nano-fil, he expected protection to continue for SIX YEARS, although I would not feel the slickness after "only" two years.   For the price I paid, I think I can redo this every two years without my wallet complaining...

Anyway when I picked up the car 10 days later (both Kabe-san and myself laughed at how over the years I had until now never gotten him to detail the car... "Finally!!"):

First, at RAPT (the pictures don't do the work justice - there is a certain gloss and sheen the human eye picks up that simply can't be replicated even with a DSLR - and of course the paint feels super slick and smooth): 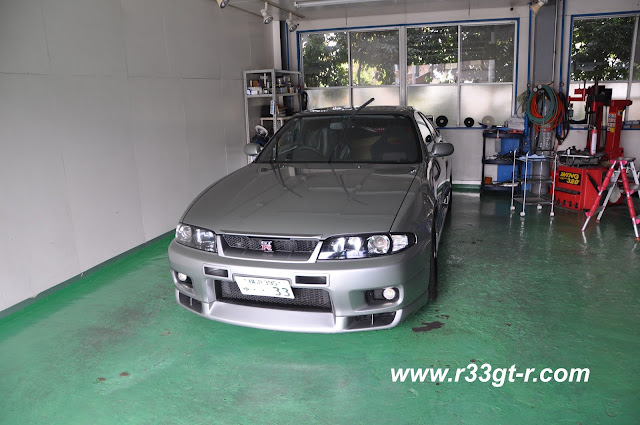 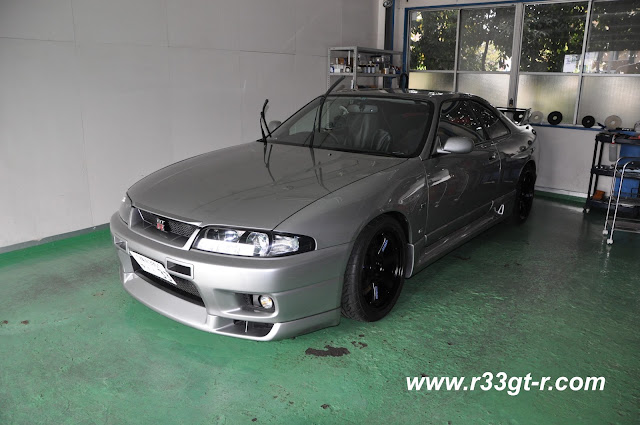 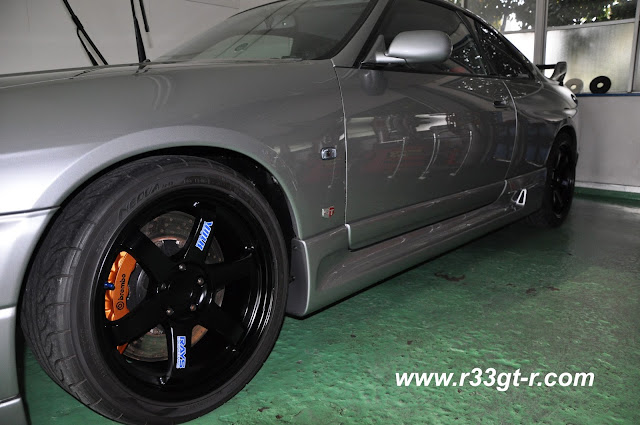 I took this opportunity to replace both rubber bump stops on the hood. A worn out one on the right side was causing the hood to droop a little on one side.

So now the bonnet is lined up properly, or at least, the best it can be given 1990s Nissan body gap quality/technology:

Before bidding me farewell he also gave me this nice little maintenance kit: 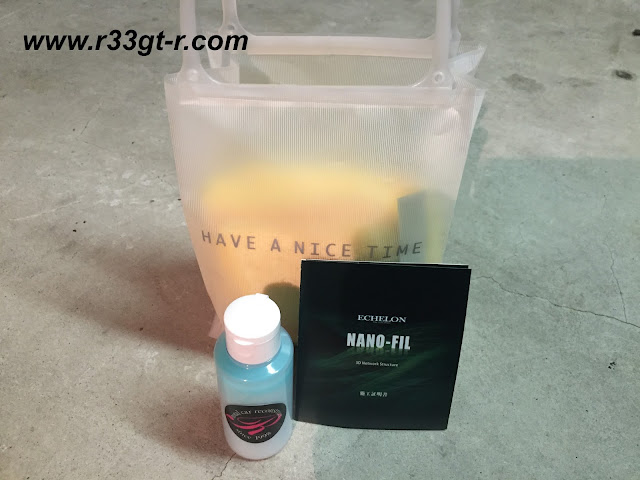 Then later in my garage at home, under daylight and "normal" fluorescent lights: 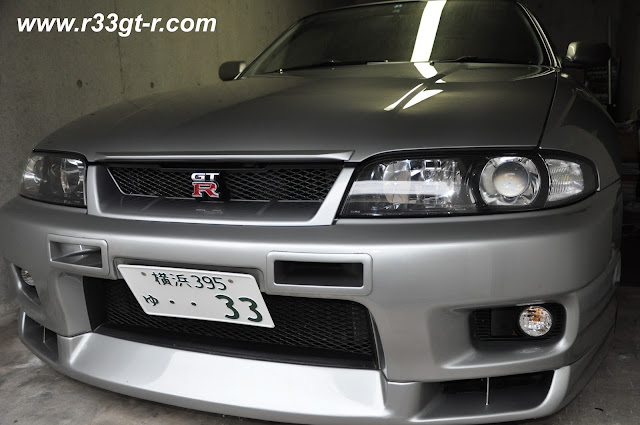 Admittedly, on a silver car it's very difficult to see the differences, at least in a photo. Up close in real life, what I notice most is the marked reduction in swirls in the clear coat (the existing paint has to be perfected before a glass coating is applied), as well as the removal of built up grime and such in crevices.  For example, he took special care around the headlights, bringing back the black lining on top of the headlights, as well restoring the black on the turn signal grill slits and other black plastic. 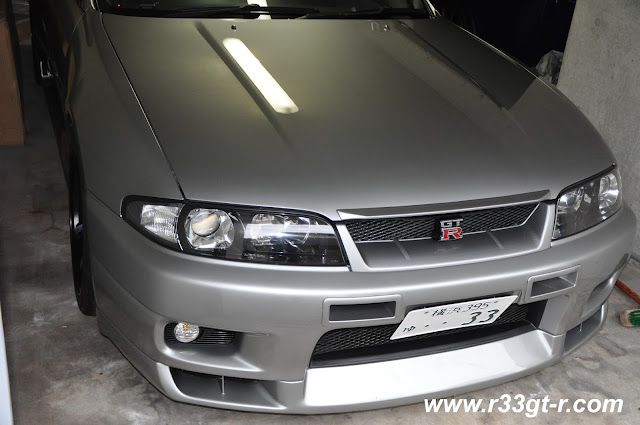 Anyway, the car now looks great. Now, going forward, anything body work related will be to touch up or fix areas that need work, such as the front lip spoiler which always gets scraped up, and maybe replace the front GT-R emblem which always gets dinged up.   I also have collected some interesting parts that need to be added too, so eventually need to add those.

Most problematic now is, what am I going to do with all the Zaino stuff I have now... Kabe-San says that application of other products can sometimes make things look worse...??

Nice post again Aki, as always i'm pleasantly surprised by the quality of service in Japan! Here in Holland its horrible and has really thought me to do as much as possible by my self to my car! Further more about that G'zox tried to find it outside Japan sadly no luck, i only turtle wax my car but would like to try that.

And about your emblem, i would advice to get a R35 one. Does take some work to get if fitted properly, but the look and quality is worlds apart form the BCNR33 one. Got a rear R35 emblem for my car and really love the look.

Such a beautiful car. And a clean one too so win win. Keep the Zaino products; you can always use them on the Lexus.

It's really worth it. The brighter, cold lights from the detailer are probably because scatches are more visible in a cold light vs warm light.

Great updates all around, from bonnet to the sillcovers.

Oh my goodness! TE37s! You definitely have a great choice, BCNR33 is my dream car, and when it's legal to have one in the US I'm definitely getting TE37s (my dream wheels).

Why i wouldnt use it (it will be something similar like C-Quartz UK, ETC.) ,

it is a coat that lays on the paint surface. To achieve that it needs a tight bond to the paintwork, therefore it does some kind of chemical burn which you can see after a while. The only thing that you can do is repaint the whole car.
This was found out by several hobby detailers e.g. glossboss.de etc

I would recommend using the zaino which needs to be applied two to three times a year.

Stj88 - don't go with the G'zox, go with the Echelon Nanofil! - I had Kabe-san use the lesser grade of Echelon on my Lexus and wasn't that happy with it, to be honest.

Abdul - yes, I am finding that Zaino works well with these "glass" type coatings just fine. In fact brings out the gloss even more!

Ibo, Russ and Ella, thanks.

2fast, yeah well if it ends up burning the paint, it'll give me an excuse to repaint the car. Never mind that, as a lawyer, I'll be the first to sue Echelon for the new paint job.