Using Desiccants to Preserve/Freshen Up the GT-R Interior

A couple of months ago during a business trip to Hong Kong I made time to meet up with my friend Matthew, who owns and actually drives one of the world's most pristine BNR32s.  Not only was his car clean and very stock looking on the outside, but the interior was super clean and moreover, smelled new!

Here is a bad photo, taken at night: 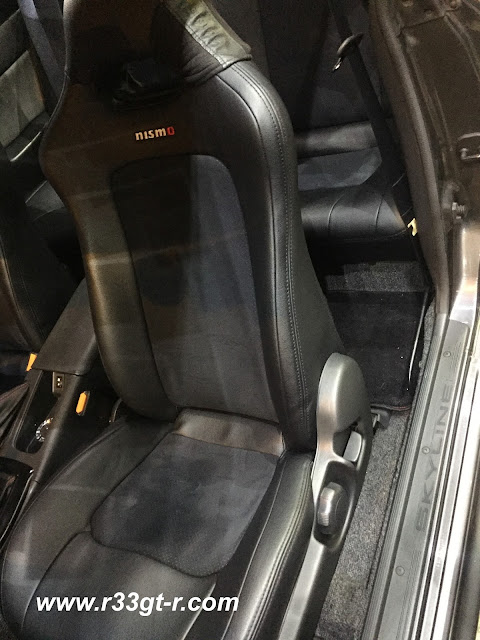 Part of that might be these new (gorgeous!) NISMO seat covers he recently installed, but in scrolling through his car build album on his Facebook page, I found that he has also this nifty trick to ensure that the perpetually humid Hong Kong air doesn't cause "stuff" to grow in his car and possibly cause some smells.  Obviously, what separates a clean car from a pristine one (OCD approved) are the details - note clever use of the coat hangar (I'll explain why this is genius down below):

It's currently somewhat rainy and cold in Japan (with its four seasons the country always seems to be raining every 3 months or so, with the change in seasons) and that means lots of humidity (but summer is the worst, actually). In Japan, there are many different types of these humidity reducing, desiccant containing products, usually shaped like the ones Matthew used, placed strategically throughout one's residence to keep moisture from building up - e.g. in clothes and linen closets, under sinks, etc.

Here are some of the more popular ones you can find for a few hundred yen each at your neighborhood drugstore or supermarket:

I had actually a long time ago purchased a car specific desiccant product, however running to AutoBacs and paying a huge premium isn't exactly the smart thing to do. Car specific models tend to be those modified "flat" types or flattened versions of the carbon/calcium salt versions designed not to tip over in a car.

As Matthew figured out, using these desiccant products is key. However, the stuff easily found, while it works well, has a tendency to tip over and possibly spill.  Thus, I was impressed by his genius in using a coat hangar to make a quick and easy custom rack to secure the desiccants around the transmission well.

Inspired, I was going to do the same thing, but then found these:
The trick of course is to make sure they don't tip over and spill. In my case, I decided to place these under the front seats, as they are flat enough to do so.  And, they are tall enough so that they won't tip over, if they are placed under the seats.

However I was still concerned that they might end up moving about and ending up in the rear footwell, where someone could knock if over.

Hence, these super compact ones are great as they should slide UNDER my front seats and fit - but how to ensure they stay there?
And then because I'm not as clever as Matthew (and I'm lazy):
On the driver's side, it similarly fits underneath the seat as well.

Of course I know the best way to prevent weird stuff buildup is to run the A/C occasionally - this also helps to lubricate all the A/C hosing/seals - but since I don't drive my car much anymore (lots of future mod planning at the moment, however), and even though my car is always parked in my covered garage, just in case, at minimum this will prevent any moisture in the air from collecting and causing any weird issues.  Not that my A/C or the car smells weird, this is strictly a prevention issue.

Have a couple more posts before the end of year coming up so stay tuned!
Posted by Aki at 12:30 AM

Hi Aki, I see that these seat covers are available for 33's as well. What did you think? I was slightly put off by the fact that they are covers and made from vinyl.

Well they didn't seem bad at all, the quality is very high but obvious doesn't have the same smell as the real thing. Likely more durable, but yes I agree.