Yes folks, I'm pretty sure some of you are not going to like this one. But hear me out!

Truth be told, this post was also long in the making - not only did it take 3 months for this made-to-order part to be made, right after I did get them I didn't have time to install them before taking the GT-R in for its new transmission.  Then, various business trips etc. have kept me from finishing the install and posting.  In any case, excuses are done, here is the post.

Now I realize some people will think this is not tasteful, nor functional, and others will call it "bling" (hence the title), but for me, I always felt that Nissan just had not gone quite far enough to differentiate the R33 GT-R from its non GT-R brothers.  So I took a clue from what Nissan did for the BNR34.

Perhaps to detract from the lower grade (harder= cheap?) interior plastic (than the 33), the R34 GT-R has nice aluminum side sills which scream "GT-R" the moment you open the door. Just in case you didn't know what you were getting into, I guess. 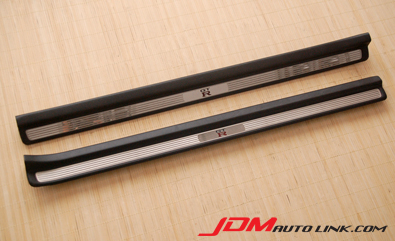 On the other hand, the R32 and R33 GT-Rs have, in deference to (or perhaps because of) their heritage as the fully factory tuned versions of the non GT-R forms of the R32/R33, these ugly cheap/cheap looking plastic door sills with "Skyline" inscribed on them (i.e. we don't need bling to sell the car?). 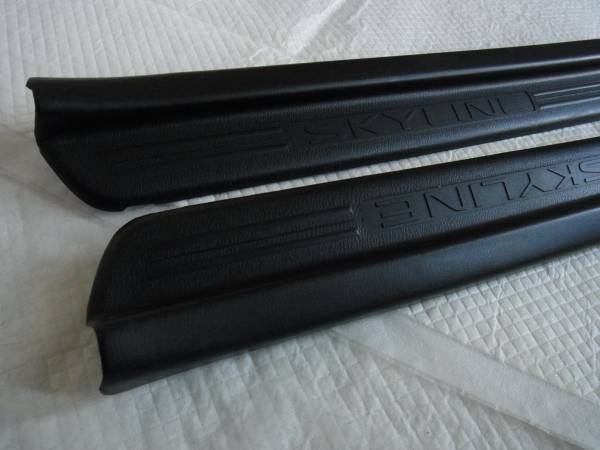 Now while there WAS a dealer installed option for aluminum side sills (called "kicking plates" in Japanese) for the R33, which you can find on the used market, they still look cheap to me.


And the aftermarket offers carbon fiber and leather wrapped versions too.


As long time readers know, I've done some DIY LED mods to the interior, using red LEDs in the ignition key surround and door handles to match the red motif on the Series 3 seats and door cards. 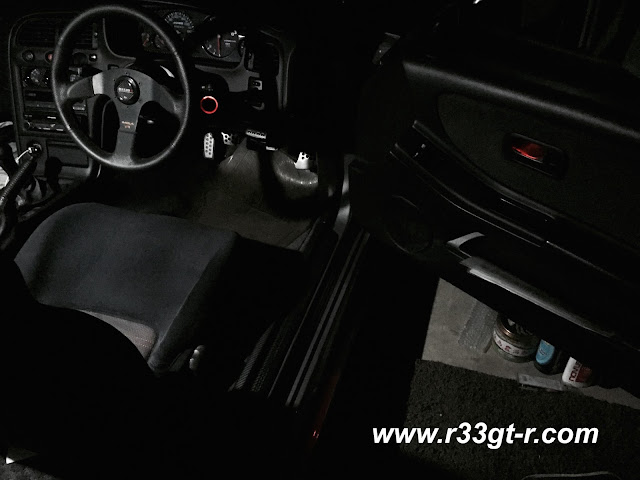 And of course, I troll the internet constantly looking for ideas and products that could improve my car - lately though I have been looking to improve the interior, which is where I think modern cars have a huge advantage over older cars. In other words, I want to modernize, but without taking away the essence of Skyline-ness.

Enter "G-Corporation" - I had found these guys about a year ago, but didn't launch this project until June.  That is, I placed my order with them in June but was told that these would be made to order - so first they would be getting new parts from Nissan, and then doing the work, and the final product would take a couple of months.

Anyway, these guys are LED specialists. And the product I found was this (although this was an R34 version) - LED "kicking plates:"


But this photo only shows what it looks like in the dark. I wanted to see what they looked like in daylight, but seeing the photos of their other samples I figured, why not, looks pretty good? So I went ahead and placed the order.

So finally, when I got the box earlier in the week, even though I knew I couldn't immediately fit them, I opened up the package to see what the product looked like.
Here are a couple of photos, closer up:


As for wiring these pieces up, this was easier than I thought, because I had earlier, in installing LEDs for the outside and inside courtesy lights, already created a circuit that was hooked up to the auto dimmer/fade out circuit of the car.  So it was a matter of going in and finding that circuit, and wiring up the leads from these scuff plates, hoping that they would also 1) turn on only when the car was unlocked, and 2) fade out when the car was in motion or not being used.
After a bit of contortions and swearing, I managed to get it done, but first I made sure it was working:

After confirming that the wiring worked, I just pulled off the old ones and snapped these new ones in - this is not the best picture but I think you get the idea:

Ok here is a close up on the passenger side, the red metal can above it is the fire extinguisher I keep next to the seat:
So yay or nay? A subtle, modern touch, I hope? Anyway as this car evolves one task will be on reducing the level of cheapness the interior has. I have some other projects coming up so stay tuned!
Posted by Aki at 12:43 AM

I have just taken my R33 GTST S2 off the road now for the winter here in ireland so will hopefully have time to tinker with it for a few months. Your posts always give me ideas!

What's your email, I want to contact you about a few GTR related questions.
Mine is vl dot turbo dot 88 at gmail dot com

Simon, many thanks as usual for reading and commenting! So long as you have a garage I think many cool things can be done (at least on the interior!)

Mr. VLT, normally I do not respond to requests such as yours. Especially when you do not leave your name - how would I even address an email to you? I would encourage you to simply post your GTR related questions here, so everyone who sees your questions can not only help out because there is a good chance I cannot!

I like the new mod, Aki. Every time I see the R34 sills I wish the R33 had something similar but I never thought about LED sills! My brother installed footwell lighting in his Supra and it looks surprisingly good so I think that would be a good addition as well.

Zach you read my mind... hopefully something I can work on over the end of year holidays....