I can't recall exactly when I realized that rubber/foam on the airbox snorkel had begun to fail, or even start looking bad. I think it was always in the back of my mind, but I wasn't really inclined to do anything until I saw this photo, from a Speedhunters post that Dino did when our friend Thomas and I joined him for a spirited drive up in Izu (the Toyo Tires Turnpike, to be exact) a couple of years ago.  I can't believe thousands saw this photo, with certain parts that need to be refreshed/replaced. How embarrassing! (and never mind the home made cold air intake I had attempted...I swear it works though!)

This photo HAD inspired me to replace, with new parts, some parts shown above that had degraded.  But I had somehow just forgotten about the foam on the air snorkel.

So yes, while I do like to maintain a clean car, you just tend to forget about things under the hood... however, a few weeks ago, I was "window shopping" at my local hardware store when I spotted this:
Not only was this rubber foam stuff water-proof, but it appeared to have the same sponginess as what was on the snorkel.  I had to guess on the width however.

Anyway, first step was to get rid of the ugly worn out foam:
Turns out that the double stick tape used originally was still there. I discovered this as I pulled at the foam.  And we all know that a clean surface is needed for a good double sided tape install, right?

Thus, all I had to do was to pull up on the tape portion (as the foam portion was brittle):
Done! Needs to be cleaned up a bit however.

The replacement foam tape was fairly dense, so it wasn't as flexible as the foam I just removed. So it took some slow going and convincing for the foam to mold to the shape of the snorkel:

So here it is, all done. Extremely easy job.  I think this looks even better and perhaps closer to OEM than what was on before? 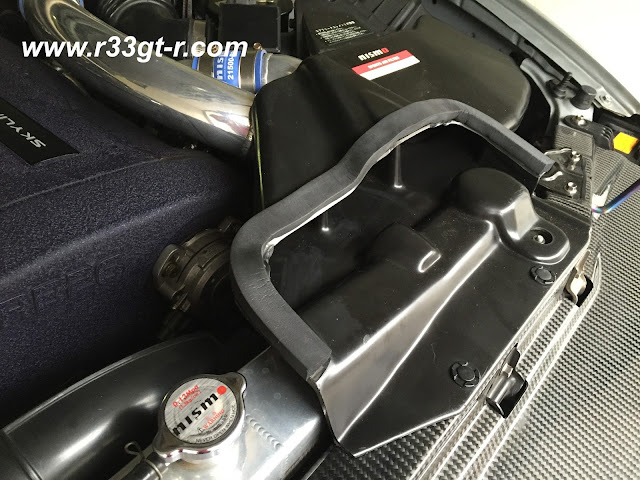 Anyone have a link to a photo of a brand new OEM snorkel?
Posted by Aki at 7:18 PM

Yes looks way better.
You can be lucky though that the tape just came off that easily.
The OEM double sided tape I removed was a pita to remove. Didn't came off in one piece at all.

I actually love the look of the OEM-ish airboxes more than the mushrooms.
What do you think the boxes(OEM;Nismo,Mines) can handle from Hp figures? Probably A bit less free breathing but theirfor cold(er) air... mhhhh

Great little update to the engine bay. I did mine a few years ago with adhesive backed neoprene foam and it still looks good and seals better than the degraded original foam.

I also replaced the foam between the top radiator mounting bar and the radiator as that had disintegrated too. You need a thicker foam than the one for the air box, but the same type will work. Yours is covered by your carbon fibre radiator shroud. Could be worth replacing too.

Thanks for the comments! Ibo, I would agree with you. Must be a reason why NISMO and Mine's leave them in their tuned cars (however NISMO had mushrooms in the 400R, so I think they learned something?)

MattC- thanks, that's a great tip! will definitely have to look into this!

Hey Aki!
Have you thought about to change the snorkel to the Nismo one for the BNR34?
I've dont know if it fits the R33 thought but it sure is a nice piece!

Yes I have of course. Doesn't line up cleanly...and the Mine's one is nice too, but it doesn't allow for use of the Nismo turbo piping...