A JDM Modernization - The Road Flare

Those of you who have imported a used JDM spec car from Japan have probably seen this, usually located on the side kick panel on the passenger side: 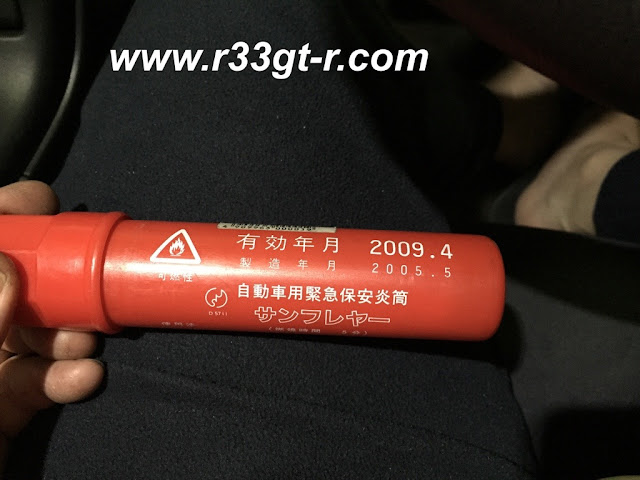 Yes, it's a road flare. Required by Japanese law to be installed on each car, and something inspected at the biannual "shaken" inspection (required to keep the car registered).

I discovered from some internet research that, while each car must have one on board, no one really bothers to check the expiration date.  This is probably why when I pulled mine out the other day, I realized to my horror that, as you can see, the flare's "use by" date was April 2009!

Although, I'm not too sure flares can go stale?

In any case, a regular flare is only about 600 yen, and sold pretty much at all gas stations and car parts stores nationwide. So it would be easy to replace, but then I wouldn't be posting this.

What I found is this following - an LED flare!  And for not much more either, about 1000 yen.

Hard to believe, but this is Shaken-compliant. According to the manufacturer, this LED version has several advantages over the standard flare:

1.) LED light stays on for over 20 hours, versus 5 minutes for a standard flare
2.) just twist the bottom to turn on. No need to remove the cap and ignite the fuse
3.) with battery changes, basically lasts forever. Standard flare - only 4 years
4.) waterproof in normal use, and in the rain. Standard flare - easily extinguished
5.) safe to use, just turn on. Standard flare, you run risk of secondary burns.
6.) LED produces no smoke, can use in tunnels. Smoke in flare can be an obstacle
7.) LED not regulated, while flares are subject to the Explosives Control Act.

Also - they don't mention that it has a magnetic base, so you could have it stuck to your car rather than thrown onto the road somewhere... although that presents another issue, you have to remember to turn it off when you are done, you can't just leave it to burn out!

With no expiration date, I'll only have to worry about the batteries - although the obvious question here is - why haven't car manufacturers made a rechargeable LED flare that plugs into its own exclusive outlet in the car?

The other worry is, can the LED be BRIGHTER than the flare? I mean, that's the real issue, right? I mean this photo doesn't really inspire much confidence...

Although this manufacturer explanation appears to make it sound like it would work:

Finally, I've never heard of a flare going off by itself and catching fire, but to me it seems possible with a chemically based one. An LED one should be safer...anyway installation, of course is easy:


Just stick in the clip! 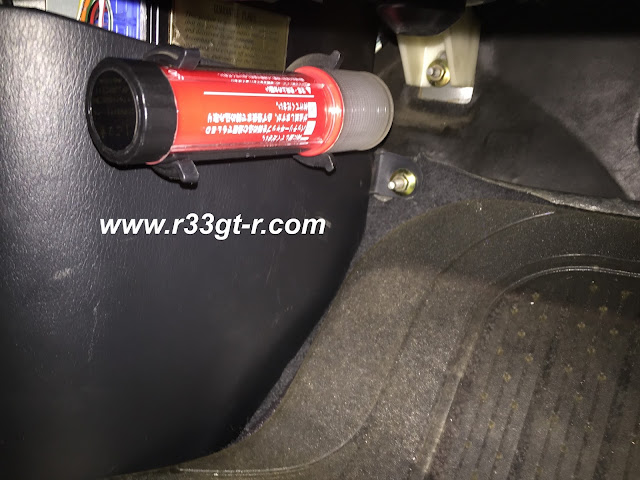 In any case apologies for the short post. I do have a few other projects waiting in the wings...just got an interesting email today on a custom part I've been waiting on... they tell me it will be ready by mid August...before then will have a few other items to post, too! Stay tuned...
Posted by Aki at 10:34 PM

Hi Aki,
Hope you are well mate. That's a great little upgrade to the GTR. I'm actually here in Tokyo now and I'd love to get some parts for my 33 GTR. Any cool auto stores that you could recommend?

these are cool, any links to where you could get one? I still have my flare in the skyline but same as you, it is very much out of date. Here they fetch approx 25euro these days!

Looking forward to next update, not yet got mine sorted with the voltage issue :-(

Thanks for the comment! Yeah I tried searching Amazon for you, on the Japan site they are available but not sure about UK or US sites. I'll keep looking for you but worst case if you really want one let me know and I'll see what I can do (S&H extra of course lol).

Yaser - I just realized you left a comment! Sorry man! Well there is always the SuperAutobacs stores, and then of course the Nissan Gallery at Takashima station in Yokohama...hope you get this message in time.

i read your article a few weeks ago.
We recently had the chance to buy an Zenki BCNR33 and the flare is still installed there.
Thats really cool. But cooler would it be if i had the new LED one installed.
So i searched the internet many hours and no one was willing to ship these LED ones to Switzerland.
Luckily a friend of mine was visiting Japan so i dropped him a message and he brought me 3 pieces. Now i am up to date with my freshly installed LED Flare.
Thanks for writing your articles. I read them all, piece by piece.

Thank you for your message. So glad you can find an LED one. I would be curious to know what your impressions of the LED false are, if you care to share of course. Although I think with such an old flare, it is probably not safe to light both to compare.

in Switzerland we don't use the flares.
We use this one:
https://de.wikipedia.org/wiki/Warndreieck

But to keep our Skyline as much JDM as possible i really wanted to have the LED Flare installed.
The LED is very bright an one can see it from far away. I personally think its much better than the thing that we use.
I am unable to say if the LED is better than the old one, because i never had the chance to see an old flare "in action" and i want to keep mine unused for the collection.

I saw that you installed yours with a black plastic around the thinner part of it. Did you buy this with it or did you make it yourself?

Reto, that black plastic clip came with the car? So it's standard. I have edited the post and added one photo so you can see what I mean... I think we are talking about the same thing?

I just found this article by searching for this flare. I was curious if this wouldn't light up by itself on very hot days in the summer so I thought of buying an electrical one. But these here in europe aren't that special as there isn't any japanese text on it (but this on yours has).
So is it possible to buy this one you have for european people?

Thanks for answering and have a nice evening :)

Sorry I just saw your comment! Not sure if you still want one, but these are still available via online stores here in Japan. I'm sure Autobacs and other car related stores will have them too. So long as the online stores send to you, you can get.

Im going to try and ignite mine and see if it still works. Its been expired for over 15 years lol