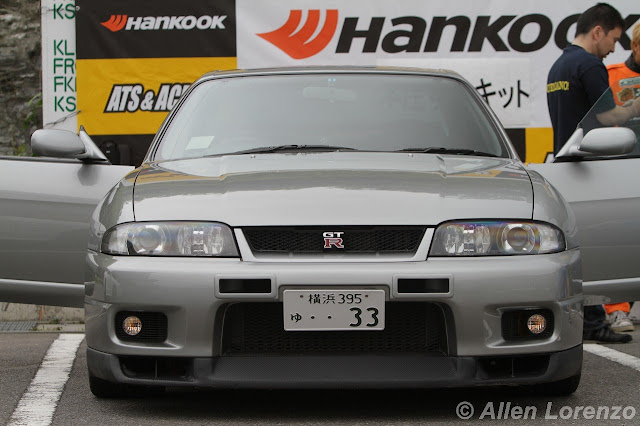 So what exactly makes the Tarzan G Box different than the standard Do-Luck unit, as well as the units offered by Midori Seibi?  Obviously, it’s the fact that racing driver and World Time Attack champion Tarzan Yamada worked for several months with Do-Luck’s Ito-san to create a device that, while replacing the stock analog G-sensor, works with the ATTESA computer to actually change the characteristic of the car in a way that Tarzan himself thinks is appropriate.  So the question is, exactly how is the car different from the standard or stock set-up?

When I posed this question to Ito-san, he told me that there were several things that are different but that the most noticeable differences would be under severe braking as well as accelerating out of a curve.

First, however, I wanted to know why I wasn’t convinced of the utility of the standard Do-Luck G-sensor.  I mentioned my experience at Dunlop Corner at Fuji, but also that strangely, the torque meter needle was no longer moving up and down as aggressively.  Ito-san explained that the more accurate unit means the application of power to the front wheels is also more accurate and smoother. As for the needle, well it’s not necessarily accurate…hmm. Starting to make sense I guess?

Anyway, back to braking at the limit: Under severe braking, the ATTESA unit sends power to the front wheels in order to help stabilize the car.  As the ATTESA ECU is wired into the ABS unit and its sensors, the more accurate and faster G-sensor allows the ABS to work to its maximum potential in conjunction with the ABS sensors.  This is true for both the standard Do-Luck G Meter and the Tarzan G Box, but the Tarzan G-box gets the ABS sensors to “work faster” and hence the ABS to be applied more accurately and linear in a severe braking situation (and this is where I should have asked more questions, but basically at this point I didn’t believe him.).

Tarzan then explained it to me this way: the second generation GT-Rs have a tendency, under full braking and ABS applied, to unload the rear a bit, causing some instability. With the Tarzan G box installed, he confidently told me that under full braking, the car would be absolutely stable, with none of that tail shake wiggle that GT-Rs are known for.  And not just on the track, but in the rain on the expressway for example, as well.

As for accelerating out of a curve, Ito-san and Tarzan both explained to me that you can get on the gas much quicker simply due to the more “sensitive” programming.

So what to make of this? As I had just learned the track on the standard Do-Luck G Sensor, I decided it was time to head back out and explore what the difference was for myself. 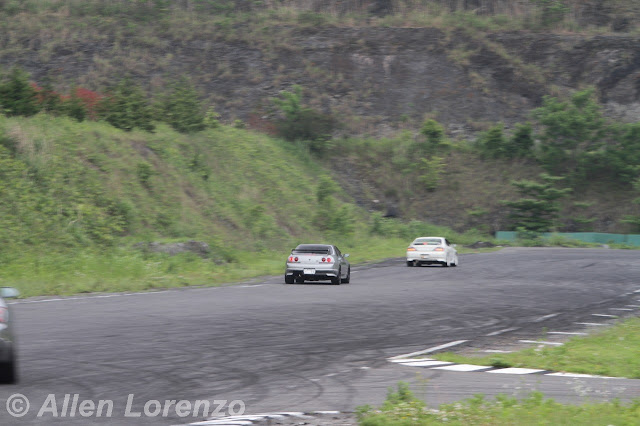 The result? When I took the car out on the track at full speed on the straight, and then braked HARD - I mean really hard, activating the ABS -  I could NOT believe it, but what they said was true! So I found myself braking harder and harder, finally mindlessly stomping on the center pedal , and having the car SLOW DOWN but without any drama whatsoever - in fact it made me so confident of the car's braking capacities that I found myself being able to think about the upcoming curve, its apex, while shifting down to take it in second -but it felt like slow motion!  In other words, while I might normally get flustered on a new track (even after a few warm up laps) trying to process all various sorts of information, having such incredible braking meant one less thing to worry about. Stomp away at full force, shorten your braking distance, and have enough mental breathing space to actually think about that corner! 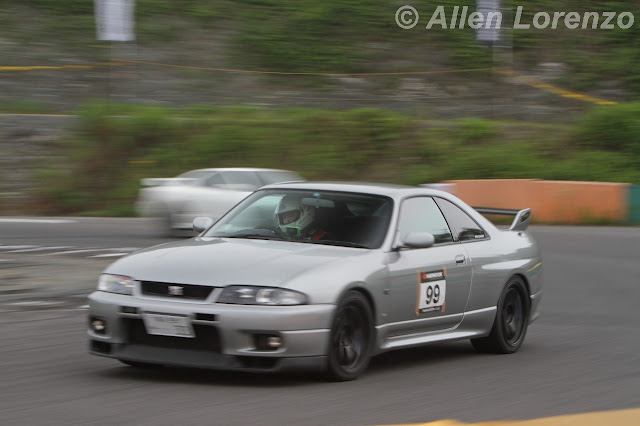 And what about powering out of that corner? Yes, on tight corners I could still get the tail to swing out in the classic FR style, but when I wanted to clip the apex and accelerate for maximum speed, I would feel the rear slip a bit but then the ATTESA would activate to pull me out and forward REALLY quickly!  So I guess it was somewhat 4WD but without the understeer? But somehow really intuitive and natural.  This was the first time I had my car where I could claim this, as before the tail would slide and would require lots of steering lock to recover - here I just kept calm and pointed where I wanted to go, it seemed. 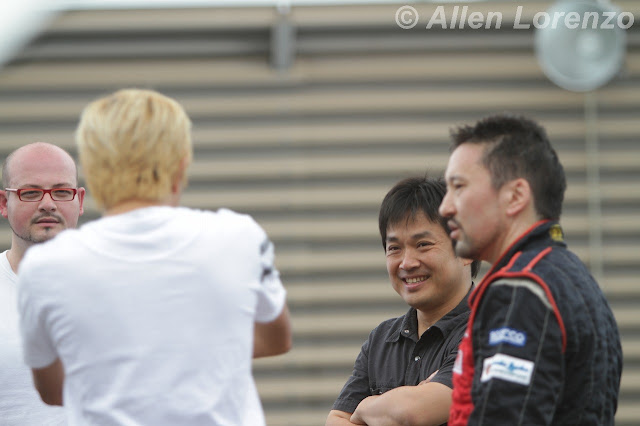 So after a few laps, completely excited and blown away, I went back to the pits to have a chat. Dino was already there (check out the stunned look of disbelief on his face, LOL), so I joined him, Tarzan and Ito-san to discuss what we had experienced.  Ito-san is laughing by the way because I had just accused him of having sold me a faulty standard Do-Luck G-sensor! That's how incredibly different the two G-sensors are! 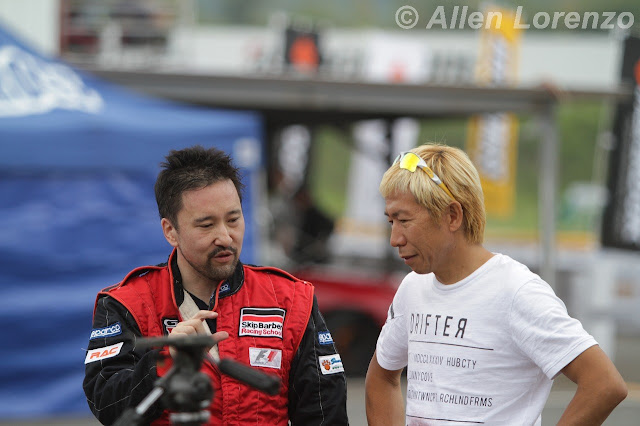 I then spoke to Tarzan himself about some of the things I had experienced driving.  His response to me was, "I'll show you, let's go for a spin" - in the stock R32 GT-R that Do-Luck had brought.  So off we went... 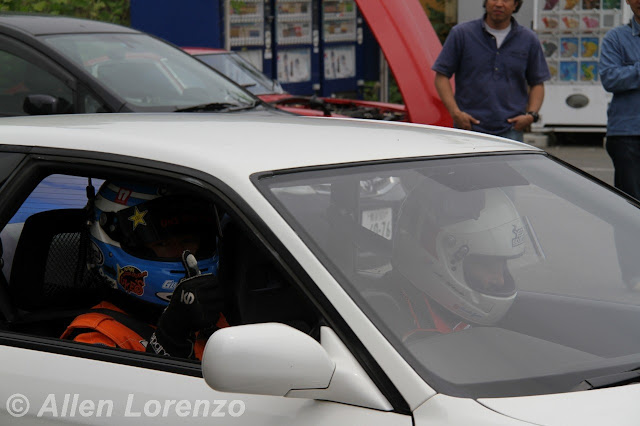 Here is video of Tarzan with Dino in the passenger seat, driving poorly on purpose to demonstrate how the Tarzan G Box makes it easy to fix a slide (well, easy for him!)

And when we were done with the white R32, I then asked Tarzan if he wouldn't mind driving MY car - first with the standard Do-Luck G sensor, and then swapping over to the Tarzan G Box. I plan to, in the near future process the video in the camcorder and show the full length video, but for now here is what I got on my iPhone, from the passenger seat!


And here are some photos - as we head out: 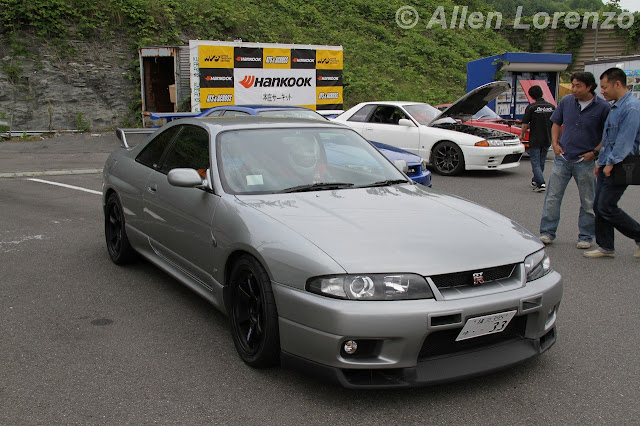 And then of us at speed. What you can't see are my knuckles turning white as I grab the passenger door grip handle, nor my flailing back and forth (the reason I gave up on the iPhone video). 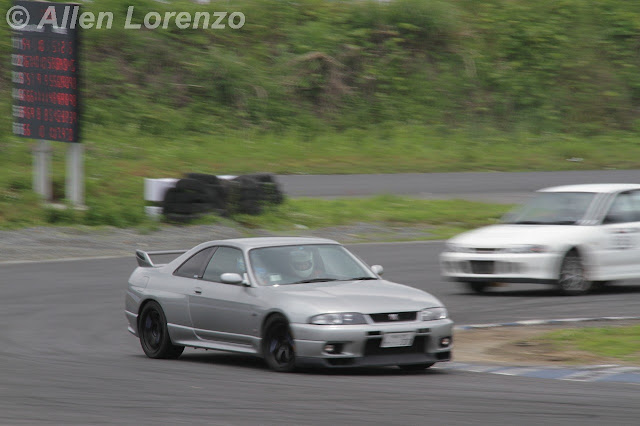 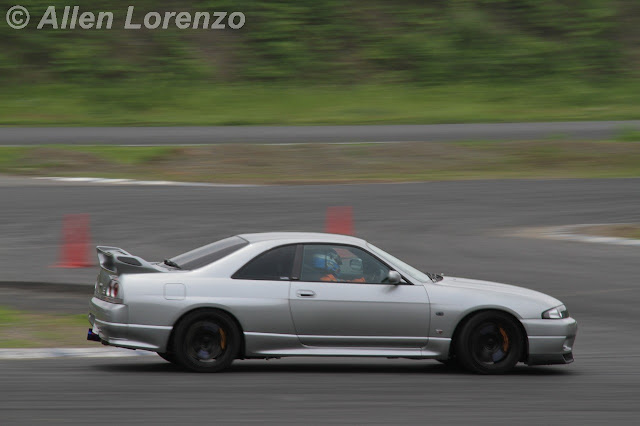 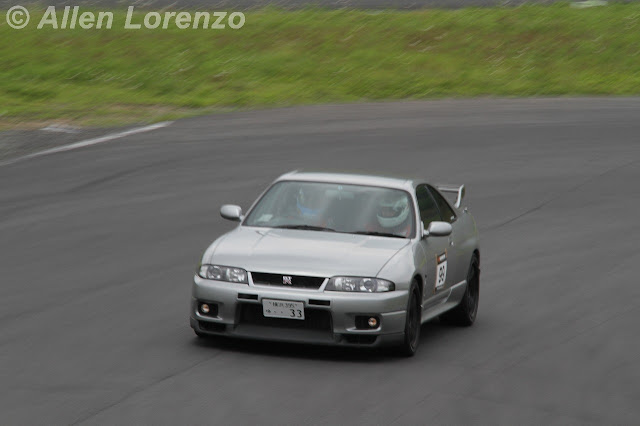 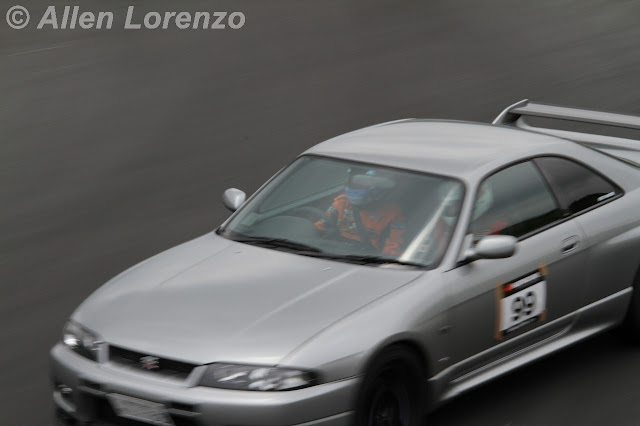 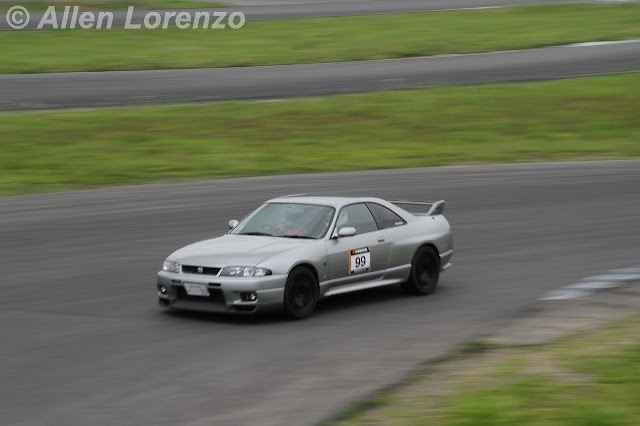 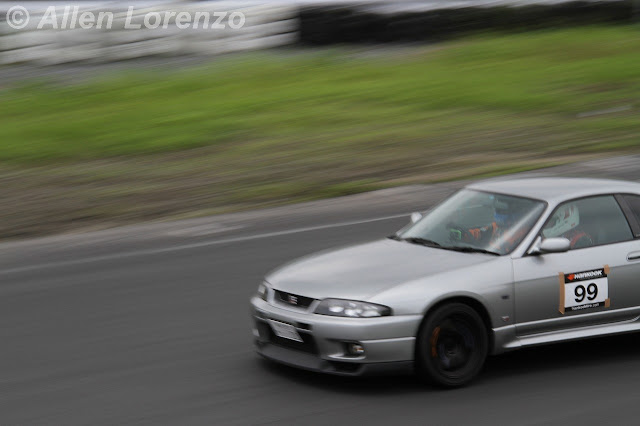 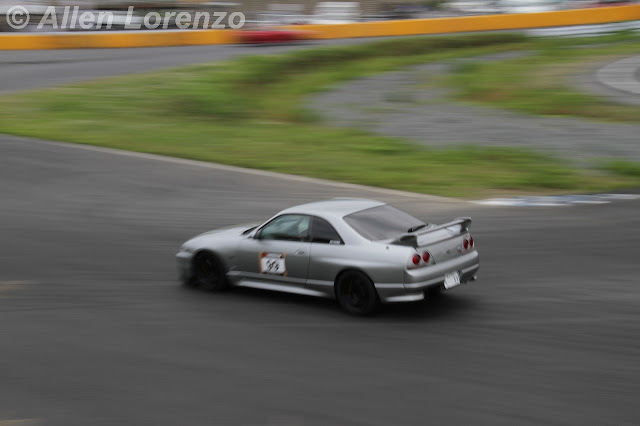 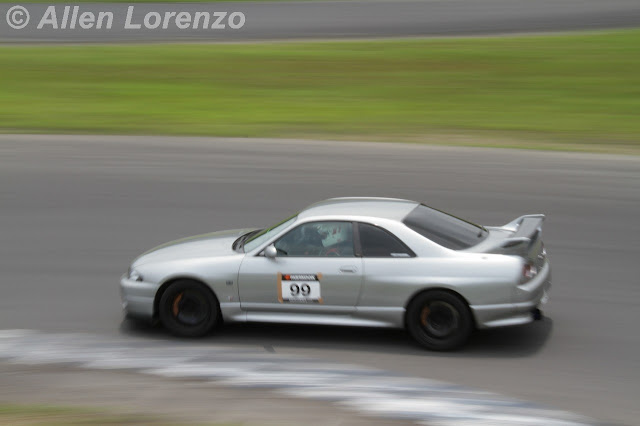 So in conclusion: this is one mod I will definitely have to get in the future (no, I did not get a free one).  It would be silly not to! Not only does it make my car easier to drive, I feel like a better driver because it makes the car so much more controllable and predictable.  And while of course I have not had a chance to test it on the street, I see no reason why it would not work well there either.

Tarzan was concerned that because of his image as a racing driver, people would be afraid to buy the unit, thinking it would be more than they need.  OR that it would super aggressive, for track/racing drivers only.  This is absolutely not the case – while it is true that this device allows track savvy drivers to explore the limits of their car, it makes the car safer on the street, where it is unobtrusive  Heck if someone like ME could feel and enjoy the difference, then this device will work for the average driver as well, on the street.

Ito-san also wanted me to let everyone know that the Tarzan G Box is fully compatible with the "ATTESA Controllers" that wire in to send more signal up front. In fact he mentioned how the controller installed in one of the ATTKD BCNR33 track cars had reached its adjustability limit, but when after installing the Tarzan G Box, was able to reduce the setting to half-way!

Please feel free to leave a comment or question, my write up has probably left some stuff out!

Part 1
Video of Tarzan driving my car; some comments

In the review of your actual do-luck system, you said that it will be fine for replacing a broken unit but has not to be considered as a performance replacement (if I've good understood).
Do you think the same about the Tarzan-G ?
Does it worth its value for a beginner driver like me on a nearly standard GTR for example or is it better to stay on the original equipment first?

Honestly I think even for beginner drivers on a nearly standard GTR, it would be good to upgrade to the Tarzan Box - but only if you think the oem unit is not working. Tarzan himself told me that he wanted to create a device that would work for anyone!

Thanks for the awesome write-up Aki, after reading Dino's article I was keen but apprehensive that faster FWD input would induce understeer but your article has got me convinced I need one in my R33! How do we go about purchasing a Tarzan box, I'm in Australia and the Japanese parts suppliers (Nengun, Greenline) only have the standard Do-Luck G-Box.....

That's right. Do-Luck is still working on expanding the dealer network that will carry the Tarzan G Box.

For now, would recommend either contacting Do-Luck directly, or having one of the Japan-based suppliers try to get one for you.

I'll follow up with Ito-san directly and see if we can't resolve this too!

Wow~ Great review, very informative too! Aki, you actually got me slightly interested in getting the Tarzan G-Box! But I've only installed the standard Do-Luck Digital G-Sensor on my car, I don't want to throw it out already.

Well I am in the same situation as you - I have the standard G-sensor on my car, but want to upgrade... but to be honest I think you will either have to be on a track, or in an emergency situation like braking on an expressway in very heavy rain...

Wow ! Awesome Read Aki ! Thanks
This is a must for my GTR's now!

Out of interest did Tarzan point out anything with your car that needs improvement or anything he suggested that would make a big difference ? Would be great info coming from someone like him.

It reminds be a bit of when I replaced my AWD unit in the Audi (Haldex).
The Tarzan Box sounds great. Will it work together with an electronic torque-split controllers?
As I understand from your review it should even work even better with the Tarzan (as the ABS sensors, attesa,... all work with it).
Great review/preview. Added to the to-do list ;) for later...

Duane - nah, he just said the engine felt good. Was hoping for some more feedback, if and when I go drinking with him will inquire some more!

Ibo - yes, although what do you mean by electronic? They are all electronic, no?

Please tell Do-Luck/Wouter/ whoever you buy from that I sent you if you do buy it!

I have tried to make an inquiry with Do-Luck a couple of times on their website contact form in both English and Google-Translated Japanese (with an apology!) and have had no replies...

Is there a way to make contact more directly?

Sam - you can email Ito-san directly at shigeru@do-luck.com

You can Cc me, and I will help out with any translations if necessary.

So any idea on Midori Spec. sensor vs. Tarzan G Box? Wonder w/c would perform better on track and on daily driving. :)

Well that really is the million dollar question, huh. I think it all depends on your driving ability, and then what you expect out of your car. What I mean by that is a pro racer vs regular guy driver, and then a pro racer who wants to have his car as sensitive as possible vs the regular guy who has no clue. Might be interesting to do some more research on what consumers say about the Midori Spec!