In my last post I hinted that I had been working on some mods for my car (and hence the relative lack of posts lately). Well, here is one.

I scoured Rakuten and finally found one at a decent price (MSRP is ridiculous... compare with similar kits from HKS and Trust...)

What this part does, is to better manage the airflow coming out of the turbos. The theory is: hot exhaust air is coming out of both turbos on their way to the intercooler, but the air from the back runs into the air from the front turbo, on the way to the intercooler. So what this Nismo part does is to provide not only a smooth gradual merging of this air - as well as providing for wider diameter piping (ie more volume).

You don't have to buy this or the similar ones from HKS et al. You CAN modify the Twin Turbo pipe - in fact I bought one from Cockpit Wako as I'm not about to cut open, then weld a thin piece of aluminum between the top and bottom of the pipe, thus separating the front and rear turbo exhausts, and then weld it all back together. And the reason I did this was, I wanted to keep the car's engine as stock looking as possible. Plus, you don't really need these pipes, check out the Mine's demo car...

There is an explanation of this mod on the UK GTR Forum:
http://www.gtr.co.uk/forum/84482-testing-modified-twin-turbo-pipe.html

But after riding in DCD's BNR34 several months ago and experiencing how responsive the turbos were (and no turbo shuffle) ... I decided maybe this was worth doing.

Anyway with life keeping me busy, the parts sat in my garage for a couple of months, until I finally decided to install the kit in late August (ie getting ready for the Tsukuba trackday).

Here is how it's done - the instructions are in Japanese, and even so are so poorly written (no detail and looks like a photocopy of a photocopy, etc. ) that perhaps this can serve as a guide to someone and save their knuckles (and some time):

Ok... so here is how it looks before you start, obviously.

First take off the strut bar, as well as the standard airbox snorkel (if you have one) to gain access to all the bolts and clamps holding the Twin Turbo pipe in. 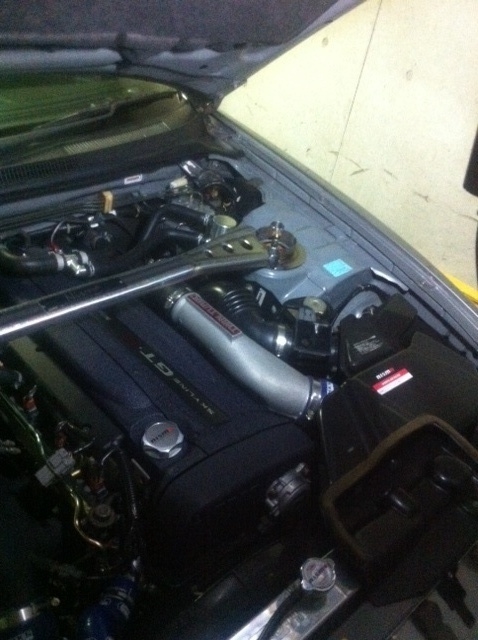 As you unpack the box, begin drooling - here is the the main split pipe of the Nismo kit. Absolutely GORGEOUS :) 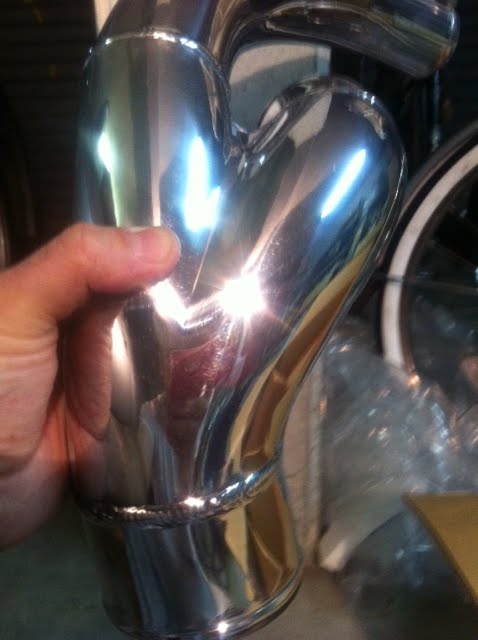 Once you've removed the clamps, and the Twin Turbo pipe, this is what you see. The silver pipe on the right is the outlet for the rear turbo. There is a shorter one for the front as well. Both of these will be coming off. 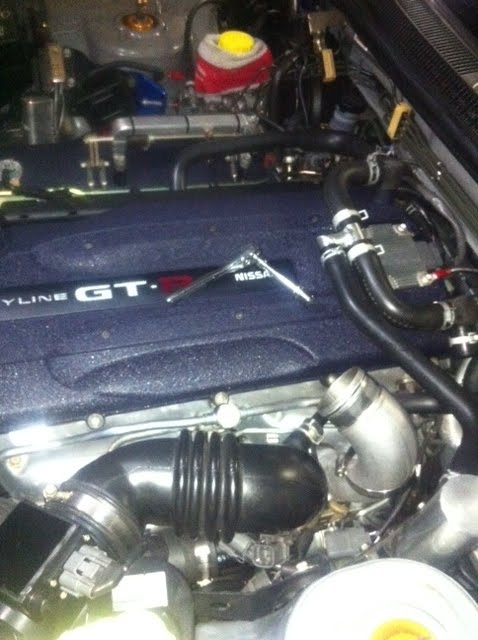 Here is how it looks once the rear one has been removed. AND, here is where the instructions are most inadequate. While the bolt on one side can be removed simply by unscrewing, the one on the OTHER side is actually held in place by a nut behind the flange of the outlet. So make sure you get a finger or something back there to ensure you don't lose this nut. Otherwise that nut will drop somewhere into the engine bay...(luckily I had a box of loose bolts and nuts and found something that replaced it perfectly).

The instructions also fail to inform you that, if you happen to have the Nismo Oil Collector installed like I have, then that needs to be unbolted and moved to the side in order to access this rear turbo area. 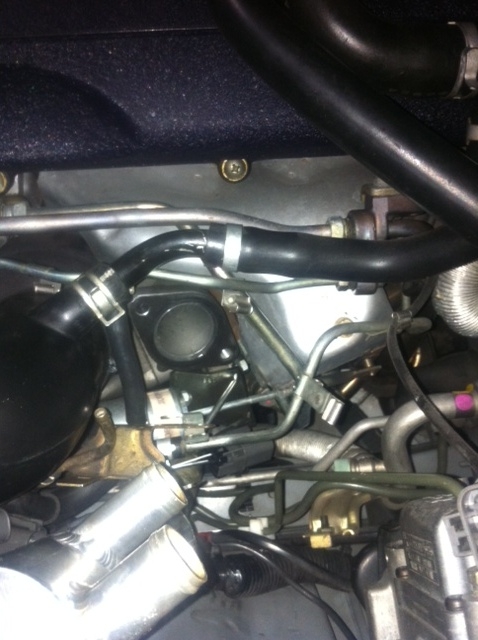 And here is the Nismo piping for the rear turbo... 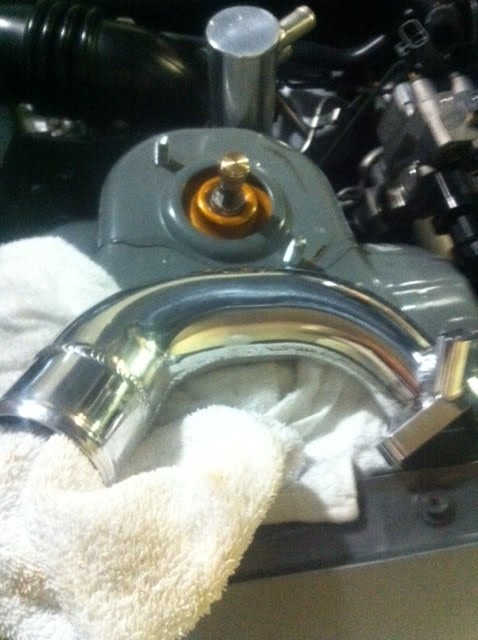 This is the Nismo pipe for the front turbo. Note that it's much shorter. 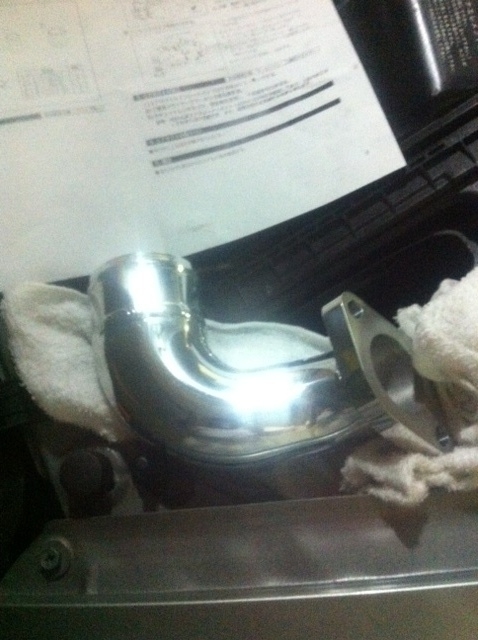 After both of these have been installed: 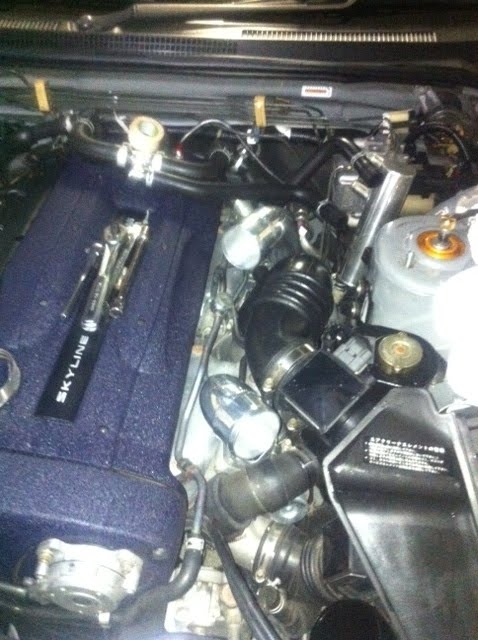 And here it is complete. A word to the wise - make sure that the silicon bands are on, and the clamps tightened, properly! I took the car on a spin the next day and the lower one (between the intercooler and the split pipe) came loose. Not fun on a crowded road. Carry a standard screwdriver and heat proof gloves so you can do your own roadside repair like I did. 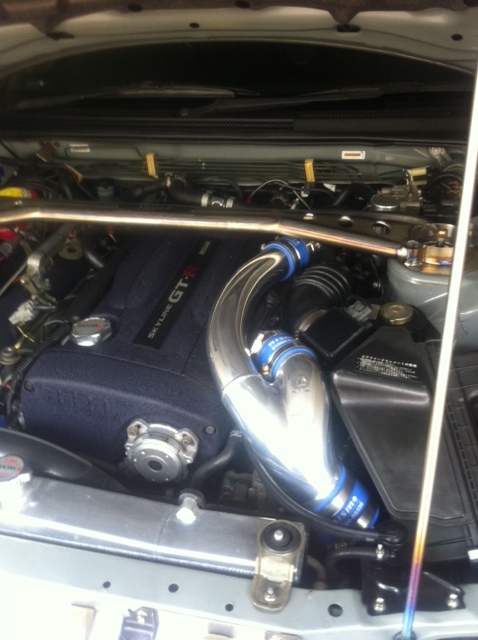 Nismo does caution on two items. One, the snorkel for the standard airbox will no longer fit, and needs to be melted slightly so that it does. Second, your ECU may need to be reprogrammed as the engine will boost a bit higher (mine was ok though).

Unfortunately my attempts at melting thick ABS were not successful, so I simply left the snorkel off until I managed to get to a dealer (which I did AFTER the track day, oh well...) Here is Sugimoto-san using a heat gun to melt the piece...I also asked him to double check the clamps and the silicon hoses. 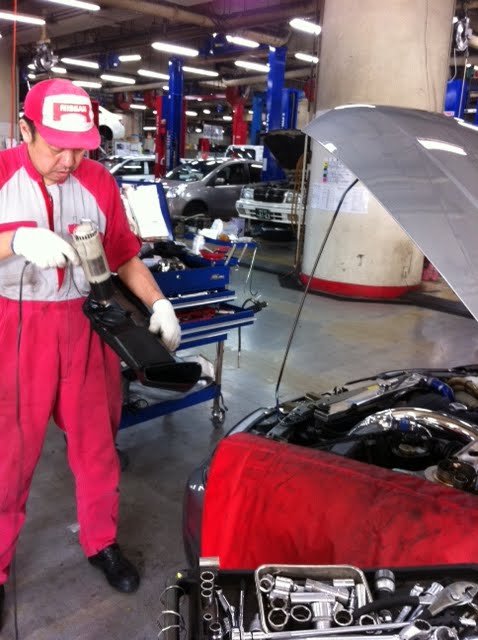 And here it is, finally complete. Sharp eyed readers will note that the direction of the bolts on the clamps have been changed - they were on the left initially, but are now on the right - and looking much more aligned than before. 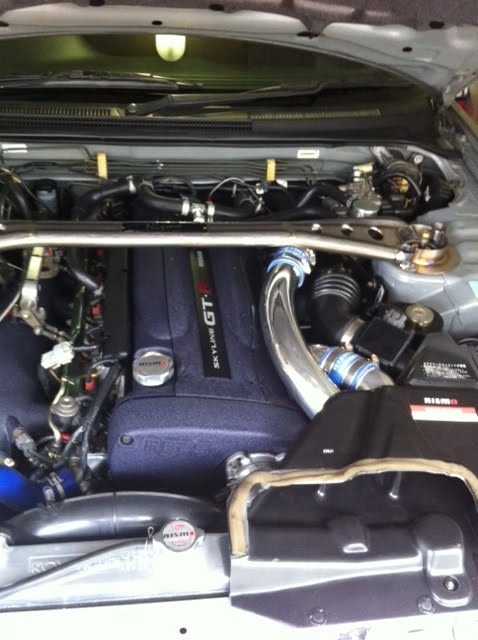 The reason I chose the Nismo kit over the others is simply the way it looks - how the larger pipe comes so close to the cam cover, the intense gloss/shine- and of course the Nismo name matches well with the oil cap, air filter reminder, radiator cap, etc.

Anyway, impressions are - yep, the engine DOES seem to spool up much faster, and come on quicker. I can still hear a bit of turbo shuffle, but not like before. So I'm happy. Now if I could only figure out a way to get more air into the airbox, now that part of the passage way has been melted narrower...

Are you running MAFs still or did u switch to speed density/MAP?

i don't suppose you've seen or considered this piping http://cdn.speedhunters.com/wp-content/uploads/2011/12/IMG_0259_0NfV_6.jpg or know where to get it or how much it costs?

unfortunately, nope have not seen it (other than in this photo) or heard if it will be sold...

bugger, oh well it probably would cost an arm and a leg but it looks like its worth it lol. anyway keep up the good work with the blog, it almost makes me feel like i own the car. P.S i like your style of tuning not going over the top and keeping it looking stock to an untrained eye.

LOL probably you are right. Thanks very much for the kind comments, it is this which keeps me updating the blog. Please do let me know if you have any thing you'd like to see or know about.

Thanks for the comment, yes you are right on that! Except, I didn't think Nismo Omori had started production on those... if they have.... LOL