Well I think that as this blog is supposed to be about the R33 GT-R, it would be a disservice if I was always talking about my car only. Perfect as it is (just kidding), it would be nice to showcase some other nice R33s.

So, I've decided to solicit other R33 owners - if you've got something written up, and some nice photos, please send them my way!

What follows is my friend Thomas, in his own words: 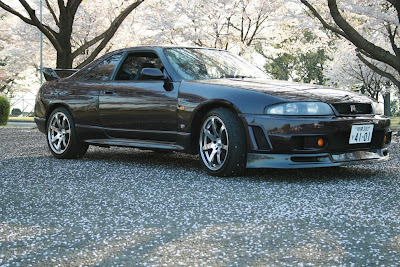 My car is a 1995 Midnight Purple GTR; I’ve had for almost three years now and well the planned sequence of the modifications have extended farther from what I had envisioned because I learned more about the car. My friend Hiro owns a GTR shop and has helped me fix the car up, my wrench time his knowledge in his shop, on the lift.

My First track experience ended in a thrown power steering belt and a not so great performance from my stock car, I had a great time but I was not happy with the Purple Machine, a year and a half later we haven’t been back to a track, but this what has been done. I can’t wait to get back on the track, I am almost ready, just need some Good coil overs, oil cooler and its read to run, as my base mod to track it. There are several planned additions, ahead.

The general idea of my concept is to have a General all round, Street, Drag and Circuit car, but mainly Street, hence the Poly bushings. I’m looking to be around 600 to the ground, when I get where I want it.

The mods:
Transfer case rebuild and Diff Torque up: the transfer case rebuild is the most significant mod of the car, rebuilt and mated to a new series 3 transmission this changed the way the car responded. In the process the clutch pack was resequenced, the factory set up gave a little bite but with resequencing, the car came in harder up front.

Carbonetics: Bolted to the crank is a Type R Carbon Twin Plate with the Carbon Ceramic coating on the flywheel, the floater plate and on the pressure plate which bites at 1350 kg.

Fluidampr: this is one of those must mods, factory stuff is cheap works and is on a budget, does not compare to this aftermarket item don’t care who told you what about how. Being able to reduce vibration by absorbing energy and reducing the whip of the crank significantly increases the smoothness throughout RPM band, done with the next mod produced great results.

Okada Plasma Direct: These are pricey and people tend not to look past the price, and opt for a cheaper brand, However there is no other set up out there that can even compare. This spark penetrates in to the heart of the combustion mixture and detonates from within. The successive bolts continue coming, keeping the cylinder hot by ensuring a complete burn and there is no blow out of the spark, the force energy is there throughout the RPM range, the Okadas fire 10 times in the power stroke; all others only fire once even SplitFire.

Indexing the plugs in conjunction, allows me to target where I want the spark to detonate at in the cylinder, which is really important. Gap location can further smooth out the idle; detonation in the same place in all cylinders allows the engine to remain in time. Random placement of the plug gap results in offset detonations which causes a small stutter, orienting to the intake side allows for firing into the compression right at TDC, so the explosion takes place at the same time the piston changes direction from up to down, the significance of the primary detonation from the Okadas comes into play as the force created moves in the right direction like a Kinetic energy shape charge slamming the piston down, the blast is also on the inner part of the crank, energy travels down the inner side of the rod arm, resulting in added Torque as the rod turns the crank with a little more energy at its core. Not only from increased and sustained energy in the spark, but spark location allowed you to harvest and direct the force to a specific part of the crank creating more torque. And the engine is able to develop a rhythm resulting in a powerful pull throughout the REVS.

With the Fluidampr absorbing these changes and keeping the time the engine responds very very quickly.

Cusco: All Cusco Adjustable links, with negative offset roll adaptor plates up front, all ball joints front and rear to include roll adaptor Thrust Ball joints in the rear and the 2 HICAS ball joints. It has an ARC front Sway bar a bit thicker than stock.

Exhaust: RSR Stainless down Pipe equal length tubing so the Turbo pulses don’t collide in the collector, a Titanium Straight Pipe, into an Amuse Titanium R1 Cat Back. Which! With the hot ignition produces a very wicked note.

Always Ride on Direzzas, currently it has the Top Secret Bumper and the Series 3 Headlights, NISMO Gauges, Blue LED Dash back light including the Triple Gauge and A/C Panel. Currently it runs stock Turbo’s and a MINES VX ROM, and is by no means a slouch in its current set up, not Tuned since the MINES ECU manages it on a general base tune. 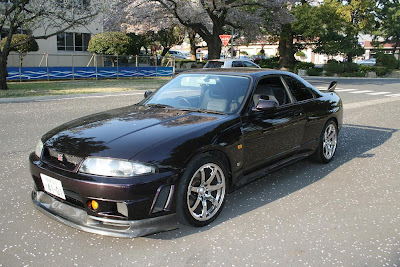 And there we have it. My first ever guest blogger. Thanks Thomas! In this case, it was easy to convince Thomas as he's local to me, but hopefully anyone who reads this blog and wants me to post something won't be shy about asking. 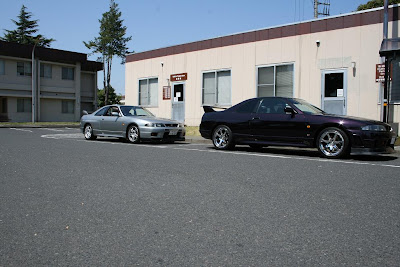 BTW, this is us at the front gate of Camp Zama, Japan - about to head into the auto shop on base on one of our many sessions tinkering with our cars...
Posted by Aki at 12:17 AM