So let's take a break from the repairs to the interior of my car.

A few weeks ago, fellow R33 GT-R owner, OCD clean freak and buddy Tom Smith messaged me to let me know that, not only had he been inspired to do a mod for his car from something he had seen on this blog, but he had actually taken measurements to prove that, indeed the mod had beneficial results!
So to review - 9 years ago(!!) in April 2009, inspired by the underside ducting found on the R34 Z-tune's bonnet, I posted this mod on improving airflow into the car's airbox.  Basically, I took a cheap aluminum radiator panel, made some cuts and folded down to create a channel for air to better flow into the OEM airbox.  Here are some photos from that post.

At the time of my post, I reported that I had better throttle response, but I had no way of measuring actual engine response.

Tom, on the other hand, runs a Power FC commander which measures intake temperature.  And he made a proper version of this air inlet scoop, as shown below - sides welded shut and the entire thing beautifully powder-coated. 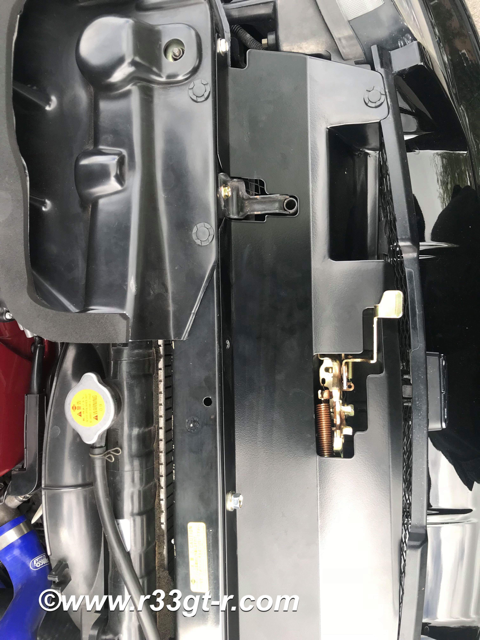 So, back to the numbers. In ambient temperature of around 16 degrees Celsius, in order to remove any variables Tom drove on a dual carriageway and for about 3 miles at 115kph in 5th gear. He then recorded the temperatures as he passed under the same bridge so as to allow the car to stabilize the temperatures.  First pass, without the panel was 38 degrees C.  Second pass, WITH this modified panel fitted, was 33~34 degrees C.

He also found "what is immediately apparent is how much more crisp it is on throttle response" - and yep this is exactly what I recall too.  It's as if the engine finally has the correct amount of air going into it in the first place.

So I suspect those who remove the stock airbox have similar thoughts - they can sense the instant response - but remember as temperatures rise under the hood, my thinking is that this kind of fresh air scoop is the only way to get the best of both worlds - more air volume but cooler.

Big thanks to Tom Smith for doing this and providing me with the photos and the numbers. I wonder if there are any other mods I did in the past that others can improve on. If so, PLEASE let me know!!
Posted by Aki at 4:05 PM

amazing piece of work. I would buy one if you put it in to production

FYI you can't use the Celsius temperature scale that way.

For comparing temperatures on a percentage you first need to convert the temps to Kelvin and then work out the difference.

Nice mod to the air intake though!

Awesome - learned something new! Thanks to both for your comments. For me, because I wasn't able to measure the intake temperatures, it wasn't about the difference in temperature, it was how much more crisp the throttle was. The Tomei Expreme, without the silencer bung, also provides that kind of instant throttle response...

The aerodynamic effect is probably similar to velocity stacks: https://en.wikipedia.org/wiki/Velocity_stack

Surprising that this wasn't done from the factory.

You can probably measure g-force vs time and throttle position vs time to get a sense for what kind of difference this makes in response.

I was also inspired by the original post of this scoop only I tried it with a fiberglass panel, probably doesn't look quite as OEM as the aluminium one but works well. The response was hugely improved for such a small and relatively simple mod. I've only just caught up with your posts, sad to see what happened to your car, absolutely shocking service. Good to see you are able to get some of it back to normal. Keep up the good work.