So after coming to the conclusion that there was no way to "save" the "Bentley" leather that Hydes had sent, we went ahead with Plan B, which was for me to pay Cesar for the replacement cost of the Wildman & Bugby "Cardinal" automotive grade leather he already had in his workshop.

And even though this was a quick and easy decision for me, at no time did Cesar push me to make this decision, instead he kept sending me comparison photos like this one to make sure I really was comfortable with my decision. 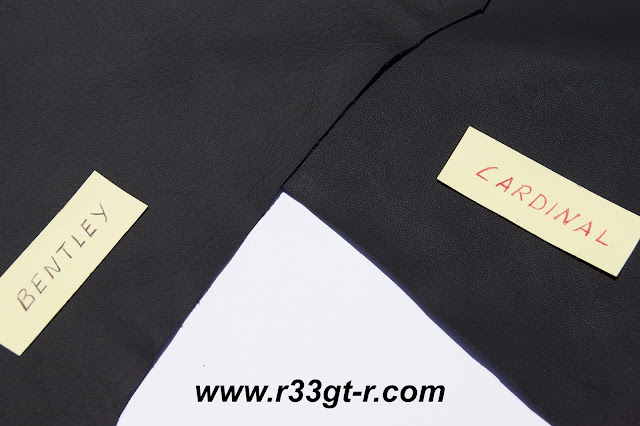 But by now, I wasn't willing to give Hydes a second chance, and frankly at this point, if Cesar said it was good stuff, then I believed and trusted him. So, minimal down time, not all is lost as we decided to go ahead with the W&B leather.

It was actually during this time (while I was arguing with Hydes for a refund, unsuccessfully) that Cesar went ahead and fixed the glove box door and the airbag cover, as shown in his other videos I posted previously. However, I had also decided to send in the pieces from the interior that were missing. So I got busy and started removing parts from my interior.


So now, all interior parts (except front door inserts) had been sent to Cesar. I was hoping I would not have to send the front door inserts, so at this time I was still search Yahoo Auctions for a Series 3 interior.

Meanwhile, as I describe in my next post, Cesar and I began discussing details...like carbon fiber and alcantara...
Posted by Aki at 1:42 PM