The leather from Hydes finally arrived, direct from Arzignano, Italy!

Unfortunately, the first thing Cesar noticed after he unwrapped the packages was that the leather was skived to 0.7-0.8mm, so thin that in places, there was barely any leather left! 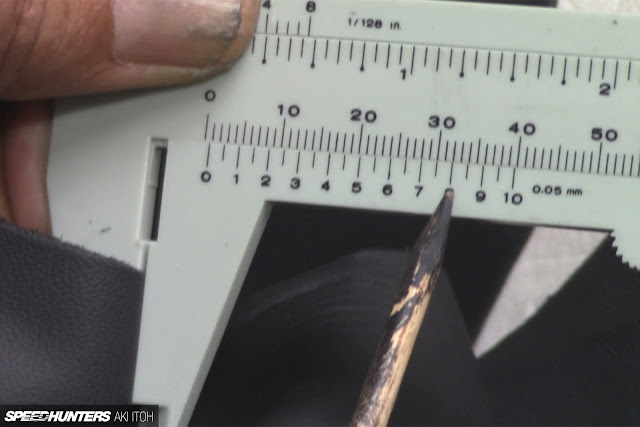 Now, we could probably work around that, but if you look closely, you can see that the leather appears to have polygonal lines in the leather... not good. 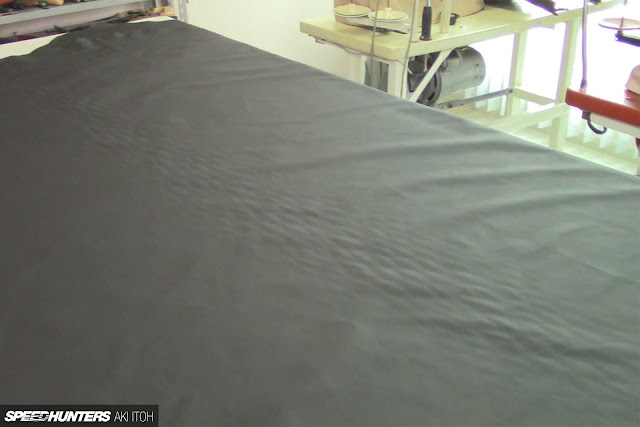 Additionally, there were areas where Cesar ran his standard tests - he first squeezed some parts of the leather to check on the pliability - and found that, the leather lacked this quality. Good leather, he said, recovers its form almost immediately, while this leather remained like "a piece of tissue paper."  He also conducted a stretch test, and found it good - it stretched and came back to its original dimensions almost immediately.  He then tested to check to see if this was actually automotive leather - he rubbed it several times with a white rag and no pigment was removed, affirming that it was automotive grade leather. However, he did mention that it appeared very plasticly, like cheap pleather sold in the USA.

In response to this, I immediately contacted Hydes and tried to see what kind of support they would give me. The short answer - NONE! No rebate, no discount, nothing. Plus, they insinuated that Cesar didn't know what he was doing.

Reading between the lines, my GUESS is that Hydes simply buys left surplus leather from Italy, and arranges shipment to its customers. Sometimes, they get good stuff, other times like in my situation, not. But Hydes likely cannot give me a discount or refund because they themselves are not in control of the process. They DID offer to try to sell the leather to me, but I would have to pay for shipment to Canada... uh... NO.

Meanwhile, Cesar was trying to figure out a way to "save" the leather. He explored taking the leather to a local tannery to see what they could do, as well as to see if there was enough material around the damaged part that we could use...

We also sought a second opinion from Mr. Ashley Wildman of Wildman & Bugby, a well known UK supplier of leather, and someone who had supplied Cesar with automotive grade leather before. Without mentioning Hydes, we simply described the problem, where upon he gave me a full education on automotive leather. He also affirmed to me that Cesar knew what he was doing.

However, I did not end up buying anything from Mr. Wildman (he knew this going in). Instead, Cesar happened to have some automotive grade leather ("Cardinal") he had already ordered from Wildman & Busby (for his own project) and offered to sell them to me at his replacement cost. So this became the new plan.

While all of this took a few weeks to play out, sometime afterwards, Cesar made a video about leather and how to judge its quality, etc. for his youTube channel.


I should mention that, during this entire leather fiasco, the remaining parts needed to begin work on the interior, finally arrived at Cesar's studio in Mexico. I'll go into that detail in my next post.