Back from Mine's... Fixed and Improved!

So yesterday morning I went down and retrieved my car from Mine's.

The culprit for the smoke that required the visit to Mine's this time around, was this particular hose at the back-side of the engine:
I was told this is one of two hoses used to cool the OEM oil-water heat exchanger, located in back above the starter motor, and below the fuel rail and assorted wiring. Nakayama-san replaced both for good measure.

I scoured the web but just could not find a photo that showed clearly where these hoses attach (it really is a huge mess), so instead: 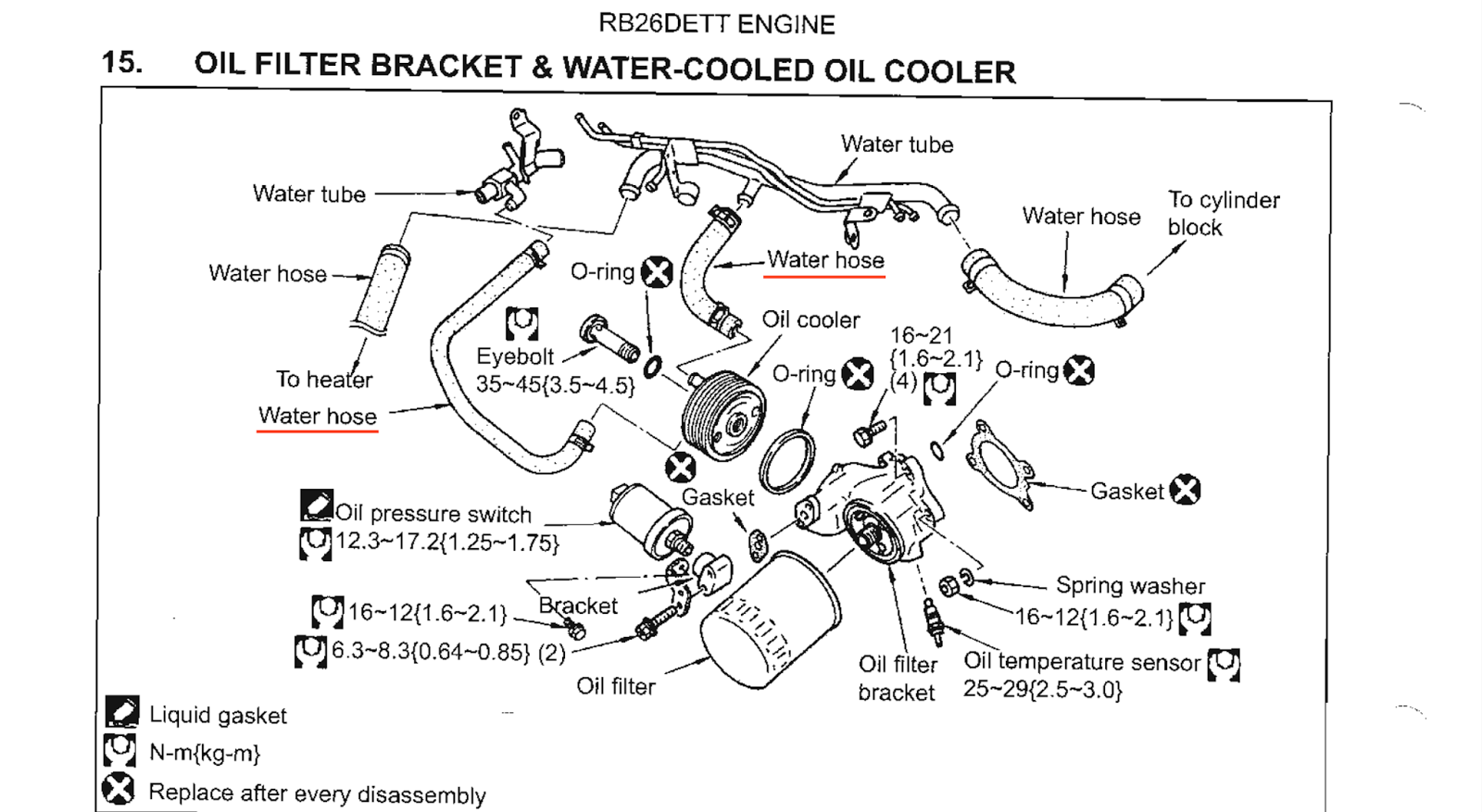 In this excerpt from the repair manual, you can see how those two hoses connect to the oil cooler. however if someone has a better photo and verification, I would be most grateful!

To replace these hoses, they chose to remove the transmission to access the back of the engine.  They then flushed the coolant system, and checked for leaks. So now there shouldn't be any more problems going forward... at least not with these hoses.

Thus, the engine did not have to be removed, which means I was not tempted to open the wallet and install those optional goodies I was hinting at.  Perhaps next time!

Although, from my research on this, I am now not sure why this piece is still there.  That is, on a road only car, this oil cooler mechanism is obviously enough to keep the oil temperatures in check; but you need an external one if you run your car on a track, however once you install that optional external oil cooler, not sure why this needs to remain. In fact wouldn't it work backwards and heat up the coolant?  Someone said that this could be to warm up the oil as the coolant warms up faster, but that doesn't really make sense as oil should be designed to lubricate at even colder temps. So I wonder if this should be removed in the future (one less thing to go wrong), or kept as a back up just in case?  And, I wonder if these 4 hoses (shown in the diagram) are available in silicon?

In any case, Nakayama-san inspected the engine and confirmed that the engine suffered no problems from the incident. So that is a relief.

As for the catalytic converter, they weren't kidding when they told me it was "dead." Check this out!
So I suspect that this degraded and clogged up catalytic converter was doing me no favors.  I asked why OEM catalytic converters last for the life of the car, while this one only lasted for about 8 years. The answer is, of course, the more free flow nature of these aftermarket ones, plus the additional power of the tuned up engine.

In any case, I've now got the HKS catalyzer installed, and the first thing I noticed wasn't just that everything smelled nicer (or more precisely, no smell at all...) but that the engine seemed more eager and responsive.

If I recall correctly, this is how the engine was back when I had it installed - very revvy, like a motorcycle engine, and extremely responsive (the engine was put in about one year after the Apexi catalyzer was installed so presumably it was still working well then).  Boost comes on much quicker and the turbos make that funny whooshing sound much more clearly and frequently now.

And this is still with the bung installed on the Tomei exhaust...I'm now tempted to run the car without the bung and with a de-cat, just to unleash its full potential!

In any case, this incident has been a wake up call, so I think I will be having more work done on the car very soon. Stay tuned!
Posted by Aki at 1:20 AM

You would be surprised how much more response you would get by going de-cat and removing the bong.

I also have one of those Tomei DB-killers but i only used it the get the car registered. I don't know how much is true but most people have told me that you shouldn't drive on boost with one of those Db-killers fitted.

And yes, I've driven without the bong before... amazing how sensitive the engine response becomes!

Hey Aki glad to hear everything is ok. Just with your question about silicon hose kit, autobahn88 sell them. I think the kit comes with 12 hoses. They have been on mine for 3 years with no issue. They are 3-4 ply so they a pretty strong. Again good to hear no damage done. Cheers

Thanks as always Aussie!

Noted on the silicon hose kit. I'll have to do some research of course, but meanwhile I have other plans going forward. Stay tuned!