A few years ago, I read an article on "fuse tuning" in one of the many car /car parts magazines here in Japan.

But 24K Gold plated car fuses??!!   Just goes to show you that, with the proper marketing, car owners in Japan will try just about anything to extract just a bit more from their cars.  And yes that includes me, except I wasn’t about to spend 1050 yen per fuse(!)… imagine how much it would cost to replace ALL the fuses in your car?

However this concept seems to be a gimmick that quickly ran its course... still, the logic seems to be undeniable, we all see those gold plated stereo wires...

The leading company was called Ritz (which apparently now is out of business, surprise surprise) and had these types as well other types of these fuses:


On this website that sold the Ritz fuses, they even have a dyno chart showing the before and after, and even better the car used was an R33 Skyline which shows a 0.5kg/m increase in torque, plus 18.7ps increase in HP!!

But 1000 yen per fuse?  Even back then, my cheapness won out…. However, just the other day, I stumbled on these very similar G-Fuses  (car fuses with 24 gold plated terminals from Amon, a popular car DIY company) on Yahoo Auctions – except now it was 490 yen for a pack of 10! So yes, couldn’t resist, although the fact that these are now clearance items tells you something…that in the end, even the Japanese consumers didn’t buy into the propaganda!

According to some here in Japan, with the 33 in particular, having the battery located in the rear, plus the longest wheelbase (requiring the longest electrical harnesses and thus a drop off in the strength of the current) of the RB26 GT-Rs is the reason why, the 33 car tends to have electrical related problems - although I’ve never had a problem myself.  Then again, I’ve installed an earthing kit, and at the moment I’m not running electrical devices that would strain the system. However, in my quest to modernize the car, I suspect that it will require more electrical items to be added – thus if these G-Fuses provide any benefit at all, and they are cheap, then well worth installing them I think? Even the slightest benefit might help.

Let’s back up a bit – do a Google search, and you will see lots of debate on whether gold plating actually makes a difference.  The debate is particularly loud in the audio/video world:
http://www.avrev.com/forum/cables/1849-gold-connectors-bad-idea-make-connections-worse.html

The consensus though seems to be that gold, while not as conductive as copper or silver, does not corrode like they do, and also does not react with other metals.  Additionally, gold is malleable.  Thus, a malleable, non-corrosive and non-reactive metal (in the audio world, as gold plated terminals, speaker wire, etc.) appears to be the best way to improve electrical contact and thus connectivity.  People agree, however, that there should be no difference in sound quality.

So what would that mean for car fuses?
In most fuses, the metal used is zinc, copper, silver or aluminum, or an alloy of those metals. In car fuses, the metal most commonly used is likely zinc, for cost reasons.
http://en.wikipedia.org/wiki/Fuse_(electrical)

So if you look at these G-Fuses, you can see that the terminal blades are plated (they claim) in 24K gold.  As a layman, I think that unless the entire fuse itself is made of gold, there won’t be any difference in conductivity of the entire fuse circuit, assuming that the metal part of the fuse is made of zinc overlaid with a thin layer of gold.

However, the packaging claims otherwise. 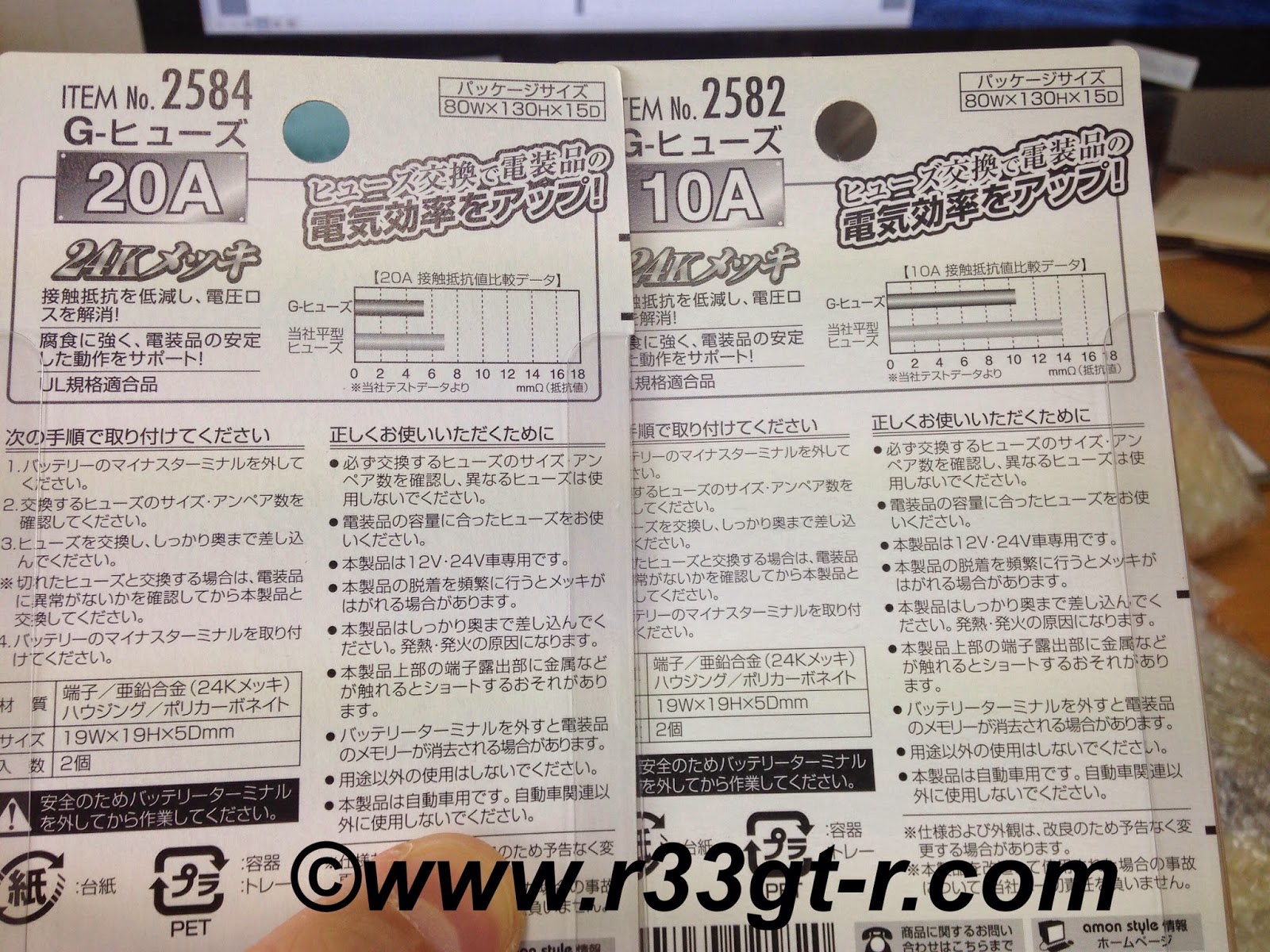 For the 10A fuse, the company shows an improvement of about 2.7mmOhms difference in electrical contact resistance.  For 20A fuses, the difference is smaller.  So, like the audiophiles claimed, these fuses apparently improve electrical connectivity.

But would there be a difference in “sound quality” – in other words, would the improved electrical connectivity somehow improve the overall electrics of the car?

To answer this question, I found people’s impressions of these on Minkara (the Japanese all things car site):
http://minkara.carview.co.jp/en/partscatalog/parts.aspx?pt=78085

To summarize, impressions are all over the place, some saying no change at all, others saying they feel a difference, etc.   The reality I believe is, if used in a simple, isolated circuit, you are more likely to detect a difference. But in a typical car, with hundreds of circuits and dozens of connectors (that don’t use gold), the likelihood of a single gold plated fuse making a noticeable difference, is slim.

Still, objectively I think these are “better” fuses than what is typically used.  So, let's try and see what happens?

First, the 20A fuse for the right headlight:

Ok how about the rear lights? 10A so maybe a bigger difference?

Conclusion: it's always smart to have extra fuses lying around, just in case, so IF you can buy these at a serious discount, then why not? Doesn't hurt, and in the off chance there actually is an objective difference, then great.  At the very least I can go around bragging about having gold plated fuses on my car now, lol!!

The ultimate Placebo effect I would think... However it is a really, really good idea to have extra fuses on hand AND know where you put them as well.. Experience speaking here! hahaha