OK, so FINALLY - installing the new headlights - all nicely protected with 3M protection film. Sure, I did my research - everyone on the forums say that only 3 or 4 bolts hold it in... and these people say you don't have to remove the bumper. Wow, sounds easy. WRONG! (Well, wrong if you have an oil cooler installed...)

People generally say that the headlights on the R33 GTR are easy to replace. First, there are two bolts that are accessible from the top - begin by removing the center grill. Easy enough. 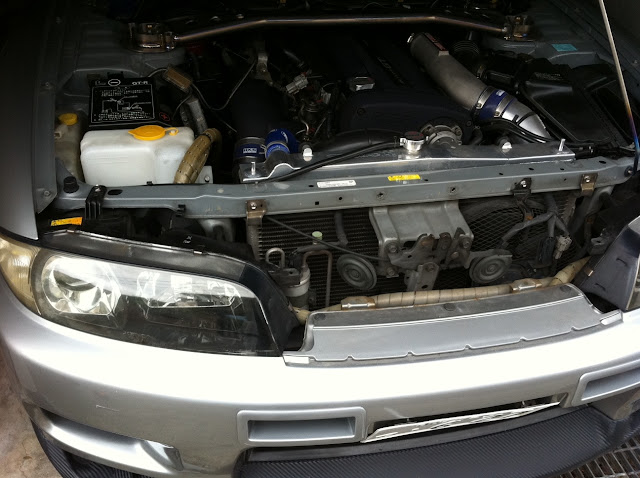 Then, to access the third bolt that screws in from the side, peel back the plastic inner fender lining (take off the front wheels to do this), and you'll be able to access that bolt from inside the fender. That much is true. 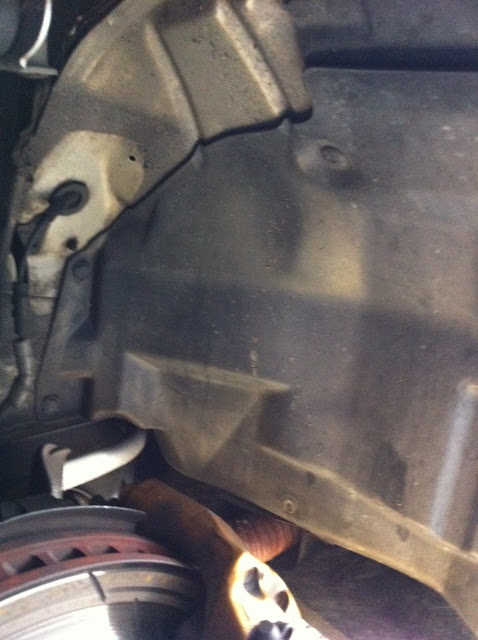 As they claimed, the driver's side headlight was pretty easy. Undo all the bolts, and pull to the front and side, and lift out - the burner unit is attached to the underside of the plastic housing. 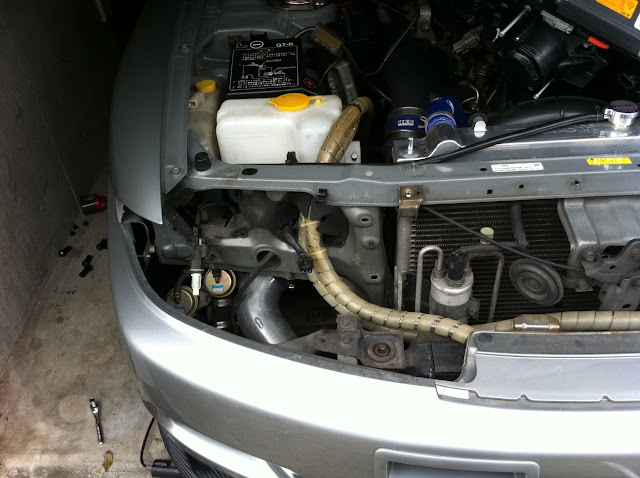 In retrospect however, I would take off the bumper next time, as even on this side the plastic inner fender liners were NOT really pliable, meaning I had to pull and bend just enough for my hand and a wrench to get through. Not fun.

The problem, and reason why the bumper should have come off in the first place, is because if you have an oil cooler installed like I do - then it is physically impossible to access the third bolt that screws in from the side - because the oil cooler core blocks access from the rear.

So, what I ended up doing was taking off the front bumper (which necessitated undoing a bunch of bolts on the bottom of the bumper, where it attaches to the front lip spoiler and the brake cooling ducts, as well as unbolting two bolts that are immediately behind the plastic inner fender lining), after which I had enough space to access that last bolt.

Here is the left side. You will notice two things - the oil cooler hoses, as well as a bracket attached to the frame upon which is mounted the burner unit. 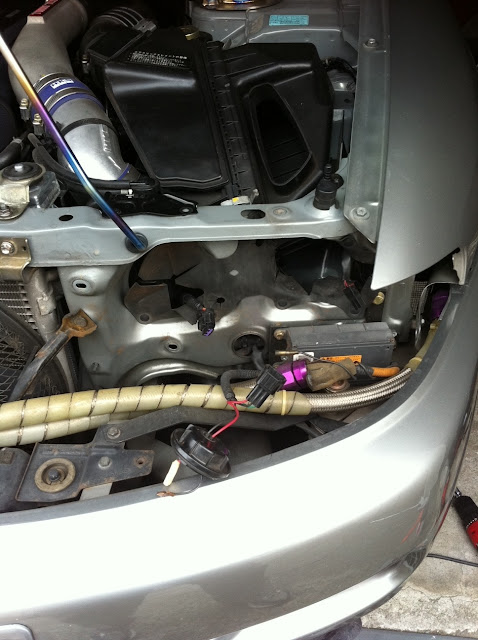 Here is a closer look at the bracket and burner unit, once I removed it from the frame. 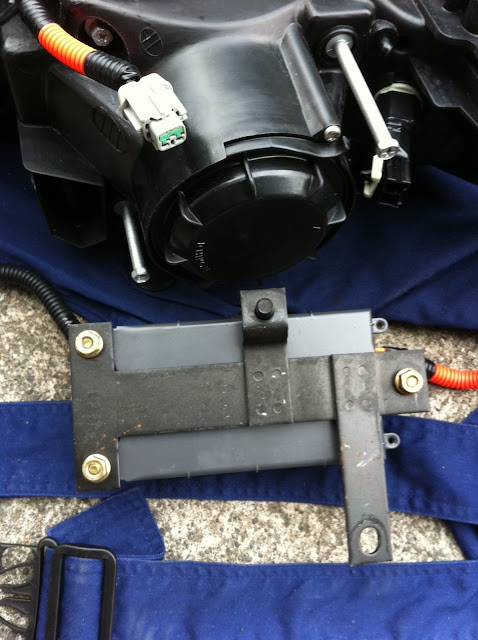 Apparently, with the oil cooler hoses, the headlights would not fit as usual, as the burner unit mounted underneath the plastic headlight housing would interfere with the hoses. Hence, the custom bracket (I assume it came with the HKS Oil Cooler kit, Nissan Prince installed it for me so I don't know for sure) which relocates the burner unit safely out of the way.

Here is the new headlight unit on the right of the old one. I've yet to remove the standard bracket underneath the plastic housing and relocate the burner unit. 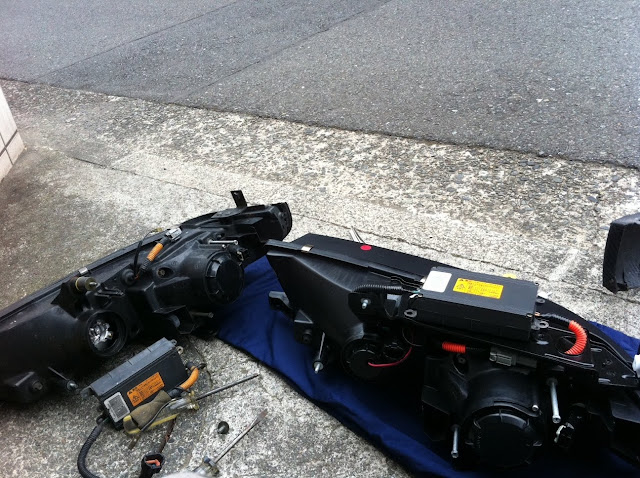 You can see here, how this side bracket (also came in the HKS kit) is also required, as the original bracket which had this side piece has been removed to relocate the burner unit. This is the side bolt where the most inaccessible bolt is screwed in from the side. 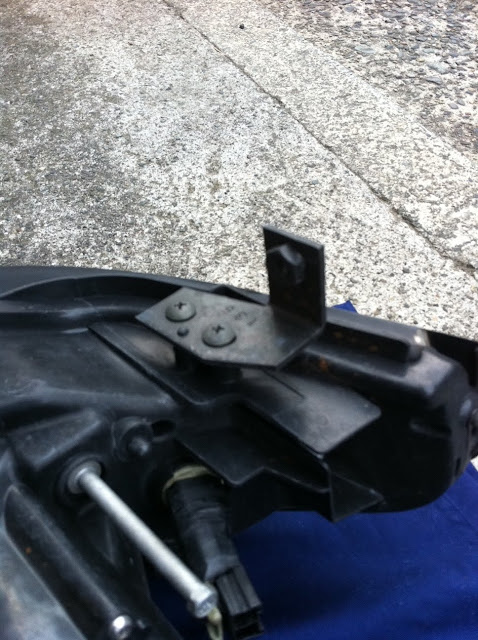 Anyway - once everything was hooked up, and bolted in, the lights were tested, and everything turned on no problem.

By the way, here is what the old light (plastic cracked inside) looked like: 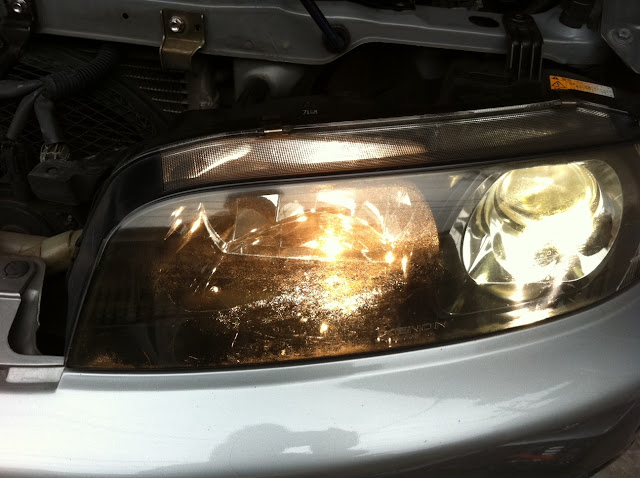 And here is the new light - so clean! Still haven't driven the car at night since the install, looking forward to seeing the difference. 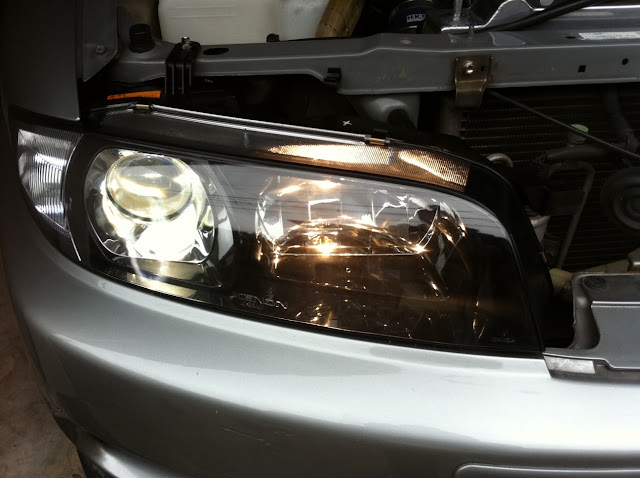 My only worry is that I haven't aimed the headlights... maybe I'll have Nissan Prince do that for me next time I swing by for a visit!
Posted by Aki at 11:16 PM