Yamano Handling Club PLUS at Motegi

ok, it's been awhile since I last posted...my apologies. Been fixing up my car, adding some new parts...we are moving soon, to a place with only mechanical parking, so I am trying to get everything done to the extent possible in the garage space I currently have. (see insert link here)

Anyway - about Yamano Handling Club PLUS... it's an all day event held at a special area at Motegi raceway, the concept is basically to explore your car's limit in a safe, non-high speed course - somewhat like an autocross, but not timed.
http://www.mobilityland.co.jp/yamano_m/

Richard and I, both not being early bird people, decided to stay the night before at the hotel at Motegi. Highly recommended (note, ladies, Richard and I were in SEPARATE rooms, of course). Rumman met us downstairs during breakfast the day of. Here I am getting ready: There were a lot of high performance cars that day: 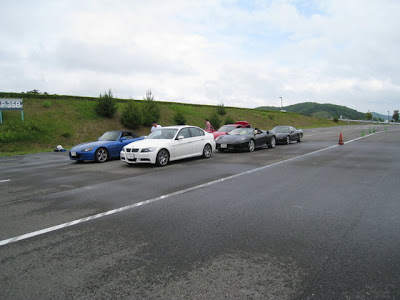 Richard and me on the course, with Richard driving (too bad you can't hear me screaming...) Afterwards, we headed back to Tokyo. Rumman saved me and Richard from certain capture by an undercover police car by blocking the chase (thank you!), and then we stopped off for some fast food curry-rice at a Parking Area: I made it back in time to have the local Shell gas station guys give my car a hand wash: Very happy with this, it shows that my repaint job on the front lower lip spoiler survived!! (see related post, previous day)