(The below I wrote when I first visited and didn't see this guy for who is he really is.)

So last weekend, my friend Dino and I decided to visit with Nakamura-san, owner of a very interesting and special shop, Worx Auto Alarm, located in Chiba near beaches famous with the surfing crowd.  It was a nice day for a drive, so despite my having known Dino for more than 10 years,  I decided to let him drive my car for the first time.  I figured a man who has driven more cars than I can count, who's not getting paid to drive it, can give me his objective impressions on my car.  And yes he did!  So I'll post those up in an upcoming post.

Anyway, Nakamura-san is famous in Japan due to his love for the RB26 GT-Rs (he is especially a big fan of the R33, he told me!) and his work, especially, as his shop name states, on car alarms for them (even in Japan these cars have a high theft rate).  He also does car stereo and other electrical stuff so for basically anything electrical, he's THE guy.

He's done the installs for the cars owned by and featured in GT-R Magazine and the like, so he's widely known in the GT-R community here in Japan.  Here are some examples of what he does for GT-Rs. Most importantly for us R33 owners who want a modern 2DIN stereo head unit, is perhaps this:
Recently, Dino had some work done on his BNR34 (installing some switchback LEDs from VLEDS) and featured it on Speedhunters. What impressed me the most, as well as I'm sure many people, was the level of attention to detail Nakamura-san takes in making sure the wiring is neat and clean: 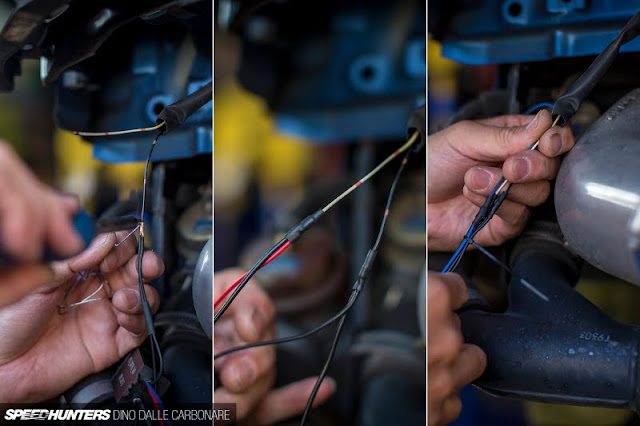 So as not to get the jumbled mess of spaghetti found in my car:
In addition to being a rabid 2nd generation GT-R fan (he's got one of every model), he also has some other interesting cars in his collection. One being this Fiat thing which apparently he bought because he loved what the print ads said at the time "In Pursuit of Ferrari" or something like that...


Anyway, he's got some other vehicles like this very American one.  For me, however, is the excitement of finally meeting someone who is just as, if not more, OCD than me and who is willing and able to help me on the one part of the R33 that oozes 90s Nissan cheapness, the interior.

Alas, after the 3 of us talked excitedly non-stop for 2 hours, Dino and I decided to pack up and head back... but not before we cruised by the beach near the ocean, where I took this photo.

Hi Aki, what is your email address please? Regards, Mark

I believe there is a mail icon at the bottom of the post? Please click on that and you can email me!

Looking forward to some interior mods! Always wanted to do something about the 1-din stereo..

I was amazed by the attention to details featured in the speedhunter article.
That's beautifull work.

Reading this I also wonder when we can see a full article about your car in Speedhunter ? :p (I remember some pictures during a test of the Tarzan Gbox but no full feature)

I would love to know if Worx Auto Alarm would ever consider producing the HVAC relocation as a kit. I think it is an extremely neat solution to moving it in order to put in a 2 din unit. I have seen garage-yoshida's 2 din relocation kit but think the Worx Auto Alarm one is much more aesthetically pleasing. Also finding out if garage-yoshida's FRP 2 din kit is still being produced is proving difficult.

I too would love to see this mass produced. I have told Nakamura-san so, however, he being the perfectionist he is, has told me that it is very difficult to replicate the rough finish that the series 2 and 3 models have. Nevertheless I agree with you and will push him...

Thanks for reading and commenting!

Hey Aki, I'm in Yokota, and I'm thinking about going to see Worx to get my r33 done like this, if I reach out to him, would I be able to set something up even if I can't speak Japanese?

(trying to learn, ASAP but I can't hold conversations yet)

For reasons I won't print here I don't recommend him. If at Yokota- I'll be there this coming Wed if you want to meet up with me. Email me at aitoh@hotmail.com for details... thanks!